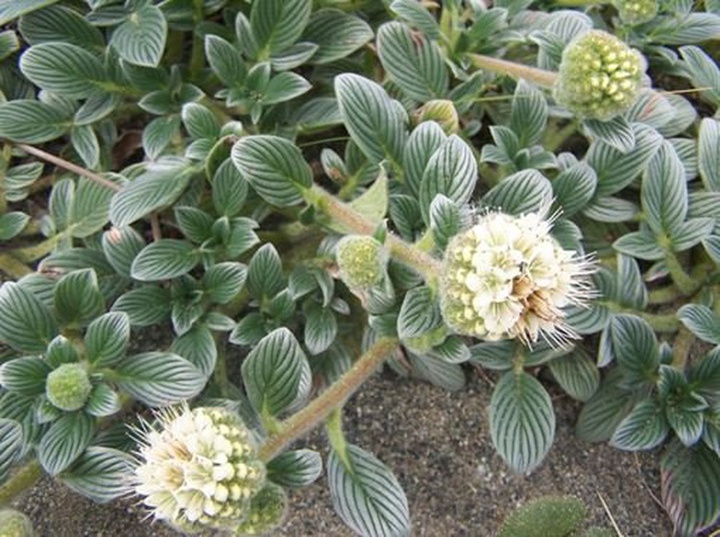 A member of the forget-me-not family, the silvery phacelia is found between Crescent City and Bandon, Oregon, with its largest concentrations in Del Norte County. | Photo courtesy of Sandra Jerabek

Del Norte County supervisors on Tuesday will consider sending a letter to U.S. Fish and Wildlife officials regarding the proposed listing of the sand dune phacelia as threatened under the Endangered Species Act.

According to the county’s letter, the listing would designate four areas within Del Norte County as critical habitat for the rare plant, including 93.2 acres in the Pacific Shores subdivision; 69.9 acres in the Tolowa Dunes, 1.1 acres at Point St. George and and 1.7 acres along Pebble Beach Drive.

“The purpose of this letter is to inform the US FWS of the existing land use patterns and activities within those areas and the County’s desire to maintain these activities to the extent they do not impact conservation efforts for the sand dune phacelia,” the letter states.

Also known as the silvery phacelia, the flowering perennial is found in 25 naturally occurring populations between Crescent City and Bandon, according to the U.S. Fish and Wildlife Service. Its most significant threat comes from invasive species, primarily European beach grass and gorse.

The proposed listing of the sand dune phacelia as threatened comes after the Center for Biological Diversity and the Environmental Protection Information Center (EPIC) filed a lawsuit in 2020. 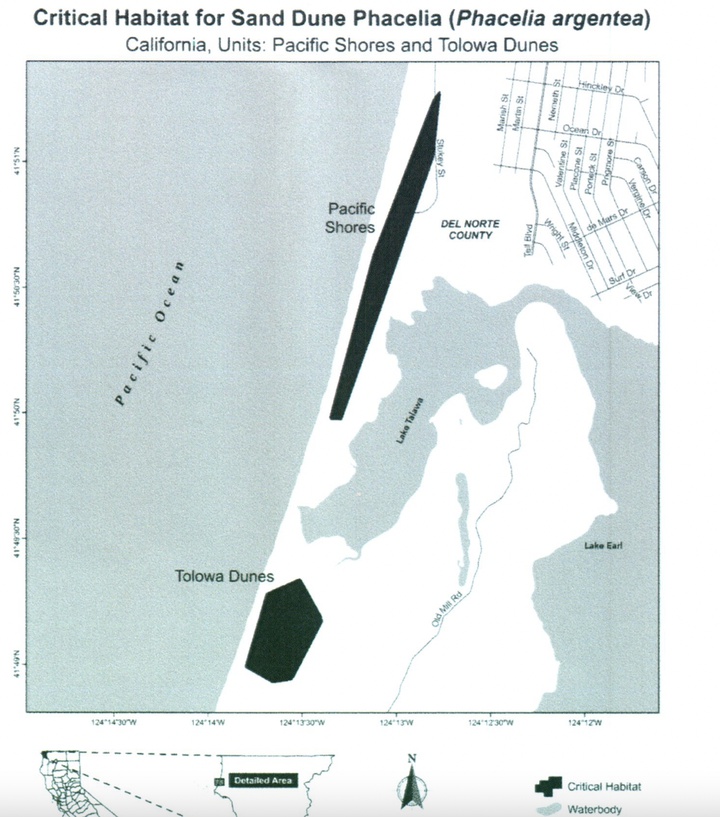 The proposed dark areas on this map of the Pacific Shores Subdivision could be designated as critical habitat for the silvery phacelia. | Courtesy of the US Fish and Wildlife Service

In its letter to the U.S. Fish and Wildlife Service, the county states that 54.4 acres of the 93.2 acres within the Pacific Shores subdivision that is proposed to be set aside as critical habitat for the silvery phacelia are privately owned.

The other 37.9 acres are public land, owned by the California Department of Fish and Wildlife and managed as the Lake Earl Wildlife Area. The county points out that development within Pacific Shores is highly regulated by the California Coastal Commission and is “informally designated as an Environmentally Sensitive Habitat Area” because of existing wetlands and coastal vegetation.
According to the county’s letter, 30 percent of the Pacific Shores Subdivision contains the silvery phacelia.

“The county has concerns as to why the area is so large,” the letter states. “Are there future plans for this area with regard to restoration and rehabilitation and if so, is there a timeframe? Is that area possibly too large to accomplish significant work in the shortest amount of time to mitigate the effects on public access and recreation, as well as to restore the species quickly?”

The county’s letter also refers to the possibility that removal of European beach grass to support the silvery phacelia’s growth would make the area more susceptible to erosion and flooding.

“Given the normal seasonally high water levels of the directly adjacent Lakes Earl and Tolowa during the winter, the possibility of barrier dune failure would further endanger the not too distant homes, businesses, wells, septic systems, public roadways and communication systems adjacent to and in close proximity of the lakes,” the letter states. “Add in flooding from a high water level on the Smith River just to the north at the same time and the problem for thousands of adjacent acres could be even worse.” 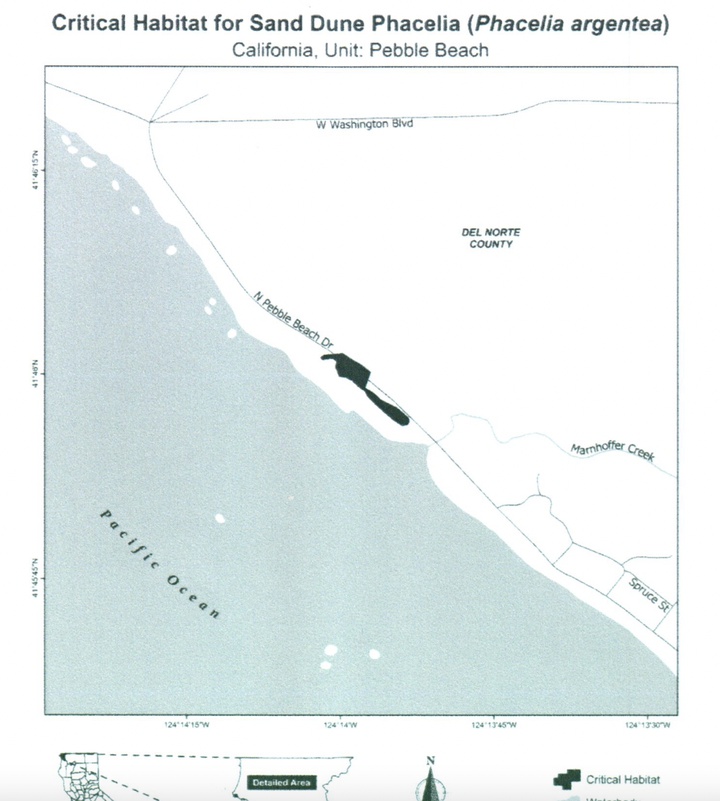 The dark area near Pebble Beach could be designated as critical habitat for the silvery phacelia. | U.S. Fish and Wildlife Service

As for the proposed critical habitat designation for 69.9 acres in the Tolowa Dunes, the county states that 4 acres would be within the Lake Earl Wildlife Area while the remainder would be in Tolowa Dunes State Park — both managed by the state.

County staff state concerns that CDFW plans to create an additional buffer area adjacent and around the critical habitat area and fence it off. The county states “no evidence” of such a buffer is needed.

When referring to proposed 1.1 acres of critical habitat within Point St. George — with 0.1 acres considered private property and 1 acre managed by the county — county staff stated it is important to them that public access on their portion be maintained.

At Pebble Beach, which includes Pebble Beach Drive, which is owned and managed by Caltrans, the proposed ESA ruling for the silvery phacelia states that individual plants could be impacted by road development or maintenance, according to the county’s letter. County staff state they are aware of the existing sand dune phacelia plants and can avoid conflicts.

The proposed critical habitat area near Pebble Beach also includes a parking area, according to the county. Though the county is seeking a permit to improve the parking lot area, its letter states it is aware of the location of silvery phacelia plants and “fully intends to avoid any impacts.” 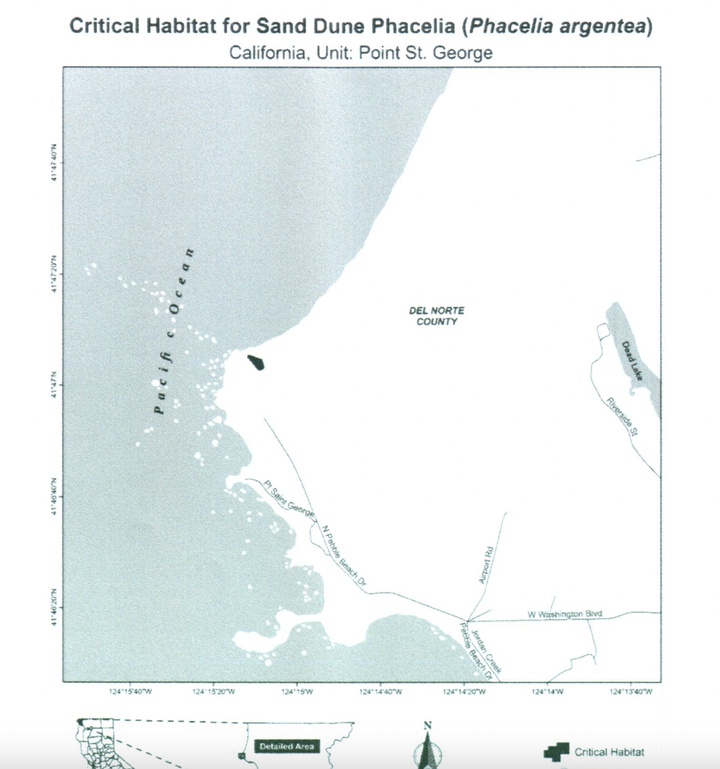 The dark area on this map of Point St. George could be designated as critical habitat for the silvery phacelia. | U.S. Fish and Wildlife Service

Though the silvery phacelia is found between Crescent City and Bandon, its stronghold is in Del Norte County, according to Sandra Jerabek, director of the Tolowa Dunes Stewards, a primarily volunteer group that leads efforts to eradicate European beach grass.

The silvery phacelia, and most native plants in the dunes, are adapted to moving sand and are largely crowded out by European beach grass, according to Jerabek. She said she hopes the plant’s listing will mean more funding for the habitat restoration efforts her group spearheads.

The Del Norte County Board of Supervisors meets at 10 a.m. Tuesday in the Flynn Center, 981 H Street in Crescent City. The public can also participate via Zoom by clicking here.