Azalea Festival is On — With Some Changes 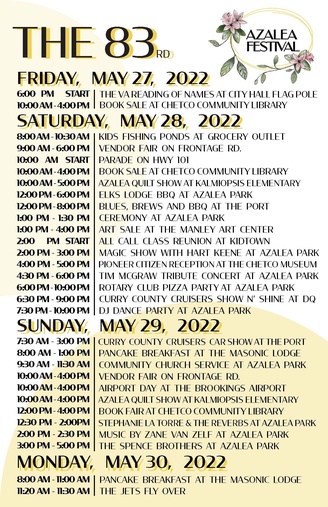 Courtesy of the City of Brookings

For those looking for some fun this Memorial Day weekend, Brookings is holding its annual Azalea Festival.

Because of the weather the city's free trolly rides have been canceled and Airport Day — a fundraiser offering plane and helicopter rides over Brookings — has been postponed until Monday.

The venues for a handful of events have also been moved indoors.

From a Brookings news release:

Due to the weather forecast this weekend, we are changing the locations of some Azalea Festival events.

Events scheduled at Azalea Park on Saturday have been moved to the Elks Lodge at 800 Elk Drive.

The vendor fair has been moved to the Brookings Harbor High School Cafeteria and Azalea Middle School Gym.

The parade remains unchanged.  It starts at 10:00 am Saturday morning.

As of now the events at Azalea Park on Sunday are still scheduled as normal. If the weather does not improve, they will move to the Elks Lodge.