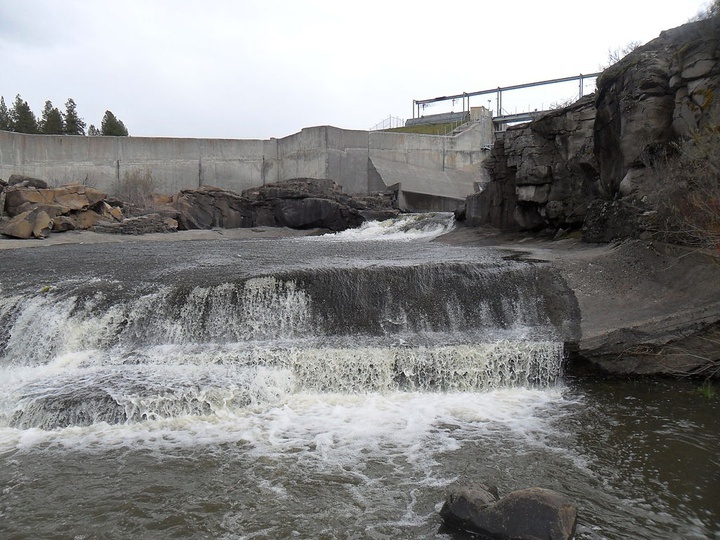 The J.C. Boyle Dam is one of four on the Klamath River slated for removal. Photo Bobjgalindo via Wikimedia Commons. Public Domain

Federal regulators have released a draft environmental impact statement on dam removal on the Klamath River, paving the way for early preparations and “some dam removal activities” in 2023 if they hold to their schedule.

If the Federal Energy Regulatory Commission sticks to its schedule, which includes releasing a final environmental impact statement in September and then issuing the license surrender order, the Klamath River Renewal Corporation can prepare for the “big reservoir drawdown” for January 2024, KRRC CEO Mark Bransom told the Wild Rivers Outpost.

“In the weeks or months following the final EIS we will be prepared to undertake necessary preliminary construction work,” he said. “At that point, we will be into 2023 and we can get underway with the early preparations and some dam removal activities. We’re very sensitive to schedule and we want to be prepared to get going at the earliest possible time.”

In its draft EIS, FERC staff recommend approval for the KRRC’s application to surrender the license to operate the four PacifiCorp dams and its plan to decommission them, according to a news release from the nonprofit Friday.

FERC is now accepting public comment on the draft environmental impact statement through April 18, according to the news release.
Removing the J.C. Boyle, Copco No. 1, Copco No. 2 and the Iron Gate dams is expected to improve water quality and temperature conditions on the Klamath River and allow declining fish populations to recover.

FERC’s DEIS reaches that conclusion, according to a joint news release from the Yurok Tribe, the Karuk Tribe, American Rivers Trout Unlimited, Institute for Fisheries Resources and other organizations.

The release of the draft environmental impact statement follows a June 2021 FERC order to transfer ownership of the dams from PacifiCorp to KRRC, a stipulation that coincides with the 2016 Klamath Hydroelectric Settlement Agreement.

Signatories to the KHSA include PacifiCorp, California and Oregon, Native American tribes including the Yurok Tribe as well as other conservation groups and organizations.

According to Bransom, one important aspect of FERC’s draft EIS, is a statement suggesting that KRRC needs to follow through on obtaining a Clean Water Act Section 404 permit from the Army Corps of Engineers, which the organization has applied for.

FERC’s release of the DEIS and staff’s recommendation for KRRC’s license surrender application was applauded by Yurok Tribal representatives.

“Once again, a thorough analysis by experts reveals dam removal as key for restoring Klamath fisheries and improving water quality,” Yurok Vice Chairman Frankie Myers said in a written statement Friday. “Our culture and our fisheries are hanging in the balance.”
Dam removal is expected to cost about $434 million. KRRC has a project budget of $450 million with $200 million coming from a PacifiCorp surcharge to its California and Oregon customers and $250 million coming from California water bond dollars.