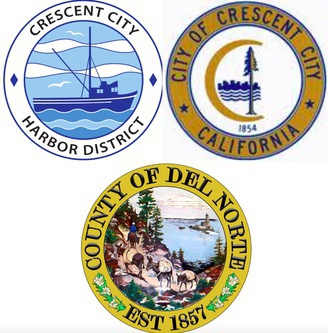 Though some questioned how the Tri-Agency Economic Development Authority’s revolving loan program benefitted the Crescent City Harbor, commissioners agreed to contribute $5,000 annually toward paying down the joint powers authority’s debt with the U.S. Department of Agriculture.

It was a decision the Del Norte County Board of Supervisors tabled last week following a dispute over whether the JPA’s third member, the City of Crescent City, was paying its fair share.

On Tuesday, one member of the public urged the Crescent City Harbor District to follow the county Board's example. However, the port’s two representatives on the Tri-Agency, Brian Stone and Wes White, advised their colleagues to agree to the $5,000 payment, stating that the amount could be revised in the future.

“I think we need to show good faith at this point in time, that we are trying to pay our share — what we believe is our share,” Stone said.

Initially created to help with economic recovery following the 1964 tsunami, the Tri-Agency brought two revolving loan programs to Del Norte County. One was funded through the U.S. Department of Commerce and since 1976 has been administered through the Del Norte Economic Development Authority.

The second revolving loan program was created in 1997 using a $400,000 loan the Tri-Agency borrowed from USDA Rural Development. The interest on the loan was 1 percent per annum for a term of 30 years. It was this program that ultimately proved a failure after several business recipients of those loans declared bankruptcy or were foreclosed on.

The Tri-Agency defaulted on its USDA loan in 2011 and in 2012 the USDA accelerated that debt, County Counsel Joel Campbell-Blair wrote in a January 25 report to the Board of Supervisors.

The Tri-Agency currently owes $288,891 to the USDA, according to Campbell-Blair. The JPA’s attempts to settle the debt at a reduced amount have been unsuccessful. But last week, Campbell-Blair told supervisors that USDA officials might be amenable to a proposal to pay the debt in full over five years while not accruing additional interest, though dedicated funding sources for those payments would be necessary.

On Tuesday, White, who has been one of two Harbor District representatives on the Tri-Agency board for about eight years, said the JPA has had to figure out how to divide the debt repayments. The Tri-Agency must also determine what each member agency would contribute toward its future operation, he said.

White pointed out that the USDA won’t write off the loan and the Tri-Agency can’t continue to operate without paying off its debts.

“I personally think we should also write into the charter that there should be no more loans given under this premise,” White said, referring to the revolving loan program the Tri-Agency had administered. “The USDA said to us way back when — before I ever got on  it — that you will loan to folks that are in need, businesses that couldn’t get a loan elsewhere. Guess what, if you can’t get a loan elsewhere, something’s going to go south.”

Stone said there were several questions he had, including whether $115,000 the Tri-Agency recovered in the form of a loan repayment would get included in its $288,891 outstanding debt to the USDA. If that $115,000 is used to pay down the outstanding USDA debt, how will the difference be paid out, Stone asked.

“My question to you folks, is the $5,000 we’re going to offer up, is that enough? Should we be looking at a larger percentage?” He asked his colleagues. “I’m all in favor of paying the debt, but we have to be a responsible government agency to do that — what is that amount we owe and how much?”

It was former county supervisor Roger Gitlin who urged harbor commissioners to table the matter until they could meet with city and county representatives. Gitlin brought up a proposal the Board of Supervisors discussed in January to increase the county’s contribution to $70,000.

Gitlin also brought up Measure C, the tax measure Del Norte County voters approved in 2018 to increase the transient occupancy tax outside city limits from 8 percent to 10 percent with the 2 percent benefitting the harbor.

“It’s somewhere in the neighborhood of $50,000-60,000 a year coming from the county coffers to satiate a debt you undertook with repairs to the harbor,” Gitlin said. “That may be in play if we’re going to do this — not give you the money to fix the harbor that we promised for.”

Measure C generated $238,000 last year and was also used to pay off a U.S. Department of Agriculture loan that paid for the rebuilding of the inner boat basin following tsunamis in 2006 and 2011, according to Stone.

Another member of the public, Kevin Hendrick, argued that while the Tri-Agency was successful in helping Crescent City and Del Norte County get back on its feet following the 1964 tsunami, it currently can’t access additional funding until that outstanding debt is paid for.

Hendrick said the $115,000 the Tri-Agency received in loan repayment should be used to satisfy its USDA debt and for things to be fair, the city, county and harbor district should contribute a total of $57,963 to pay that loan off completely.

“The harbor is equally responsible for this debt,” Hendrick said. “I urge you to accept responsibility for this debt if you want to be equal partners in this venture.”

White, however, said he didn’t think it would be fair for the harbor to be responsible for a third of the outstanding debt. He pointed out that the county and city are both larger in square miles than the harbor district is and both the city and county have larger budgets than the Crescent City Harbor District.

“Who benefitted from the debt?” White asked rhetorically. “Was it the city, was it the county or was it the harbor? And how much of that benefit went to the city, county and harbor?”

White said he felt the real conflict was between the city and county and “not so much the harbor.”