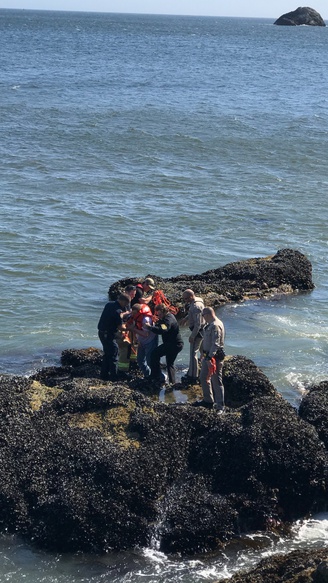 This afternoon Del Norte County Sheriff’s Dispatch received a 911 call relaying that there was a boat sinking with three people in the water, about half a mile off of Whalers Island, Del Norte Co Ca. Upon the Arrival Sheriff’s Deputies discovered the three men from the sinking boat had swam to the rocks off the south side of Whalers Island. One of them was stranded on a rock about 15 feet out of reach of the initial response team. With the tide coming in around the rocks emergency response teams worked quickly and were able to rescue him. All three men were suffering from severe hypothermia and exhaustion. They were transported to Sutter Coast Hospital. Photographs below were taken by Del Norte County Sheriff Garrett Scott. A special thank you to all of the local law enforcement and rescue teams working together to save lives.