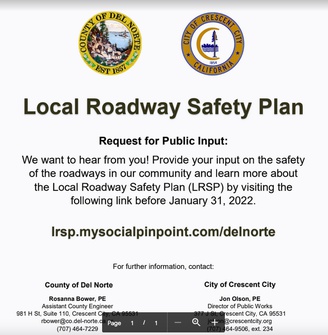 Crescent City and Del Norte County representatives are asking the public to tell them about their experiences traveling local roads.

The two agencies will use the results of a community survey to develop a local roadway safety plan, according to assistant county engineer Rosanna Bower. The county will use their document to pursue Highway Safety Improvement Program grant dollars, she said.

“The data we’re looking for is places where people had near-misses or challenges getting on and off the roadway system,” Bower told the Wild Rivers Outpost on Tuesday. “Any unsafe conditions, whether it’s speeding or it’s hard to see center line striping — just things you might not see if you hit the neighborhood in the middle of the day.”

The city and county will develop separate road safety plans using survey data, Bower said. Residents will be able to participate in the survey until Jan. 31, she said.

Using data collected through the county’s survey combined with collision rates from the California Highway Patrol will help determine if the benefit of doing an improvement outweighs the cost, Bower said.

The county will also use that information when applying for grant funding for a specific improvement, especially for a road that may not have collision history data, she said.

“That’s why it’s important to know about little things on a small roadway,” Bower said. “We’re able to use data from another region of the county to support improvements at that location.”

Del Norte County is also planning on a public meeting in mid-February, Bower said. She added that if residents want a paper survey to take, they can obtain them from the Redwood Coast Transit Authority.

The Del Norte Community Development Department at the Flynn Center can also provide paper copies of the survey, Bower said.