« Crescent City Harbormaster: Army Corps of Engineers Says It Has the Money to Remove 65,000 Cubic Yards Of Dredge Material at the Harbor 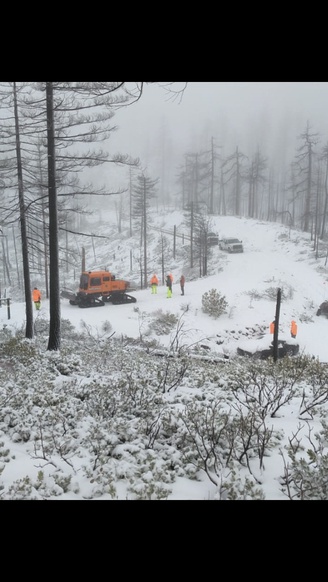 Curry County Search and Rescue personnel used the department's Sno-Cat to search for Shane Feuerborn, whose body was found near Snow Camp Lookout on Saturday. Photo courtesy of the Curry County Sheriff's Office

Curry County Search and Rescue on Sunday located the body of Shane Feuerborn, a 46-year-old Brookings man whose car was found near Snow Camp Lookout in December.

On December 12, 2021, at about 1:44pm the Curry County Sheriff’s Office received a 911 call from a person who had been hiking the Windy Valley Trail near the Snow Camp Look out and found a black Mustang car parked at the trailhead that she believed belonged to Shane Feuerborn. One of the car windows was down and it was soaked inside.  The caller reported that there was snow on the vehicle and on the ground with no footprints anywhere around it.

Members of the Curry County Sheriff’s Search and Rescue Team responded to the area where the vehicle was located and did a hasty search around the vehicle and down the Windy Valley Trail.  The SAR team were not able to locate any sign of Feuerborn due to the darkness and heavy snow fall.

On December 13, 2021, The SAR team returned to the area with the Sno-Cat and continued the search in the daylight.  The weather turned worse with the snowstorm and the teams were not able to find Feuerborn or any sing of where he could be.  The heavy snow in the area had covered up everything on the ground.  SAR teams had split up to cover more ground including all around the Snow Camp Lookout, but by the end of the day the search was called off until better weather and snow melt.

Up until mid-January 2022, our Forest Deputy and SAR Coordinator went to the area several times where Feuerborn’s vehicle was found to assess the conditions that would be favorable to continue a ground search.

On January 15, 2022, the SAR team returned to the area where there was still some snow but were able to search areas that were not covered by snow.  That afternoon the SAR team located the body of Shane Feuerborn near the Snow Camp Look Out.  It was apparent that Feuerborn had taken his own life for unknown reasons.  The SAR team and Deputies transported Feuerborn back to the beginning of the trail head and down to meet Redwood Memorial.

The Curry County District Attorney authorized the release of Feuerborn and the next of kin have been notified.  Condolences to the Feuerborn family, and we hope that we were able to give your family some closure.