Crescent City Harbormaster: Army Corps of Engineers Says It Has the Money to Remove 65,000 Cubic Yards Of Dredge Material at the Harbor 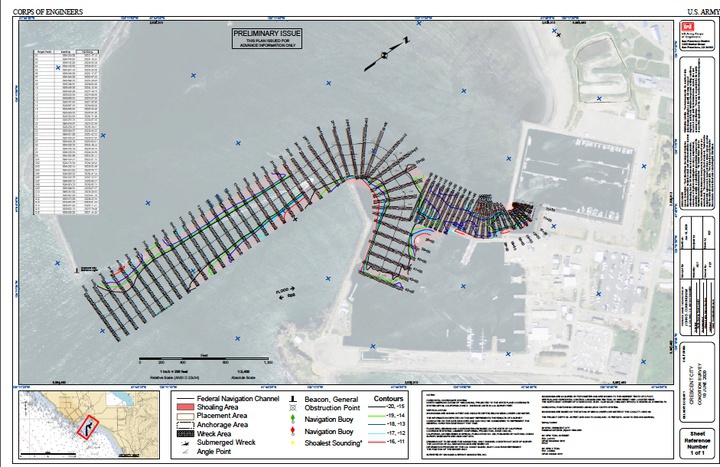 The U.S. Army Corps of Engineers acknowledged that it had the money to remove about 65,000 cubic yards of dredge material the Crescent City Harbor District has stored for nearly 10 years, Harbormaster Tim Petrick reported Tuesday.

In a 1 p.m. email, the Army Corps of Engineers indicated that once the Harbor District receives a beneficial use permit from the State Water Quality Control Board for that material, it would commit those dollars toward moving the soil out of the dredge ponds, Petrick said.

But it could be another nine months before the Crescent City Harbor District receives that beneficial use permit, Petrick said.

“They’re aware of the problem and acknowledged it today in writing,” he said, referring to the Army Corps of Engineers, “which, from what I’ve seen, is the first time we’ve got an acknowledgement in writing.”

Petrick’s report came after Commissioner Brian Stone said he had spoken with Congressman Jared Huffman’s office about the issue.

The Congressman, Stone said, “got a little upset” and told Stone that the Army Corps had Congressional funding it could use to move the dredge tailings.

Stone said Huffman’s field representative, John Driscoll, asked him for correspondence between the Crescent City Harbor and the U.S. Army Corps of Engineers about the dredge tailings. Driscoll also requested a copy of a letter the Crescent City Harbor District sent the State Regional Water Quality Control Board, requesting the opportunity to speak about its dredging challenges at the Water Board’s next meeting.

“The Congressman’s office will put weight on the Corps of Engineers to take care of the problem,” Stone told his colleagues. “And they understand the Corps has responsibility to remove dredge spoils so we would have the capacity to dredge.”

Finding a viable disposal site for the fine sediment and soil in its dredge ponds has been a significant barrier to the Crescent City Harbor District’s ability to resume dredging in its inner and outer boat basins. Dredge build up has been particularly difficult for one of its long-term tenants, the Fashion Blacksmith boatyard.

On Jan. 4, the Harbor District voted to send a letter to the Water Quality Control Board, informing them that the port had started the process of applying for the beneficial use permit as well as a diver dredge permit so it could remove the material and deposit it into a deeper area within the port.

According to Stone, the Army Corps of Engineers spent about $1 million to dredge the harbor following the 2011 tsunami. Stone said it would cost another $1 million for the federal agency to move the material to the Humboldt Open Ocean Disposal Site — the closest state-approved disposal site for the dredge tailings, about 90 miles to the south.

Speaking to the Wild Rivers Outpost following the Harbor District’s meeting, Stone said he didn’t see why the U.S. Army Corps of Engineers couldn’t just take responsibility for the material and move it without the Harbor District having to obtain the beneficial use permit.

“There is money to do the job, it’s a matter of making the commitment for the Corps of Engineers to do the job and get it out of there,” he said.

During the dredge discussion at the Harbor District’s meeting, Petrick asked the public to inform him if they’ve noticed any damage or if they themselves sustained damage as a result of the tsunami on Saturday.

Following the eruption of the Hunga Tonga-Hunga Ha’apai volcano, Crescent City saw a tsunami surge of 3.7 feet, according to the National Oceanic and Atmospheric Administration.

On Tuesday, Petrick said he had maintenance staff doing walk-arounds at the harbor and is waiting for low tide to see if the surges did damage to Citizens Dock or the port’s seawalls.

“Sometimes the boat owners see things we don’t,” he said.