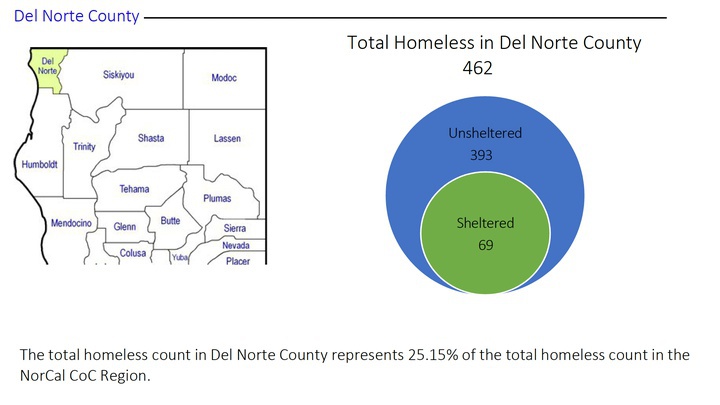 In 2022, Del Norte County's unhoused population accounted for 25 percent of the total homeless count in the seven-county NorCal Continuum of Care. | Image from the 2022 Point In Time Report 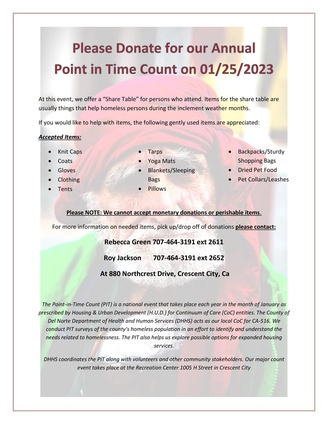 Del Norte’s health and human services department is gearing up for the annual Point-in-Time Count and is seeking donations.

The community’s annual count of its unhoused population will be held Jan. 25 with the county Rec Center in Crescent City serving as the main hub during the event.

The Point-in-Time Count is required by the U.S. Department of Housing and Urban Development and is a survey of people experiencing homelessness on a single night in January. Those surveyed could be people housed in an emergency shelter or transitional housing or who are unsheltered.

In 2022, Del Norte’s Point-in-Time survey reached 462 people, including families, those living with a disability and senior citizens, according to the report. The survey was conducted from Jan. 26 through Feb. 1, 2022 and the data was compiled by the NorCal Continuum of Care, a seven-county consortium that includes Del Norte, Shasta, Siskiyou, Sierra, Lassen, Plumas and Modoc counties.

When the survey results were released to the public in June, Daphne Cortese-Lambert, founder of Del Norte Mission Possible, said she felt it was the community’s most accurate snapshot of its unhoused population to date.

This was due to Del Norte Mission Possible getting those who are experiencing homelessness themselves to administer the survey to others in the same situation, she told the Outpost in June.

In 2021, during the COVID-19 pandemic, DHHS workers counted a total of 110 sheltered homeless individuals. In 2020, the last time a full count of sheltered and unsheltered individuals was conducted, 248 people reported experiencing homelessness.

On Thursday, Jackson said Cortese-Lambert and Del Norte Mission Possible would get their ambassadors to reach out to those living in local homeless encampments. Volunteers from Partnership Health and True North Organizing Network will be doing surveying in

Klamath, Smith River, Gasquet, Hiouchi and Kellogg Beach, he said.
For more information about the donations that are needed as well as where to drop them off, call Jackson at (707) 464-3191 extension 2652. Volunteers are also needed, he said.