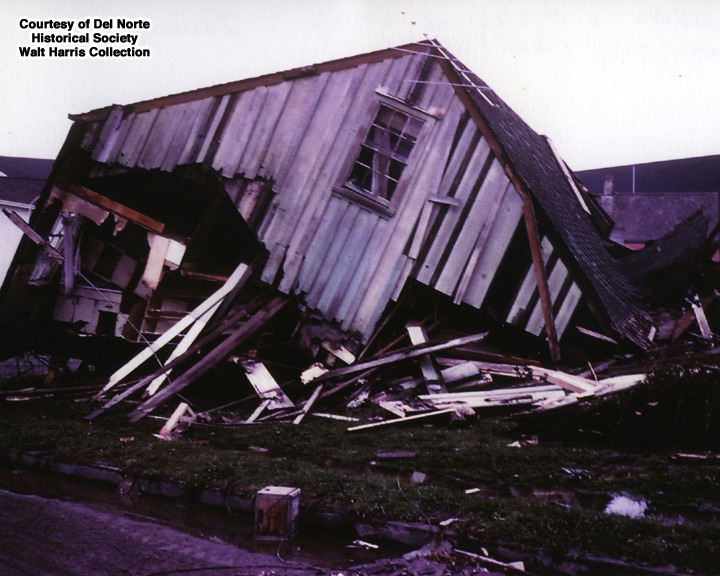 Spawned by a magnitude 9.2 earthquake in Alaska, the 1964 tsunami destroyed 29 city blocks in Crescent City and killed 11 people. | Photo courtesy of the Del Norte Historical Society

Nearly six decades after an earthquake in Alaska sent tsunami surges through Downtown Crescent City, officials plans to revitalize the tour that tells the story of “Comeback Town USA.”

Jurasz’s firm, Sea Reach, plans to finish the project by April 1, 2023 -- just before the 10th anniversary of the arrival of Kamome, the fishing vessel that led to the Sister City pact between the two communities.

One day would focus on teaching youth about Rikuzentakata’s culture and tsunami preparedness. The next day would include the unveiling of the Kamome mural Harley Munger of Piece-by-Piece Pottery is creating, Taylor said.

“We’re hoping to have vendors and food and for there to be more of that ceremonial part where we’re recognizing the event and honoring the relationship with Rikuzentakata,” Taylor said, adding that the city is working with the Crescent City-Del Norte County Chambers of Commerce and Del Norte County to plan the event. “We might do something of a lantern launch to commemorate the lives that were lost in the tsunami — those are the things we’re talking about right now.”

Kamome washed ashore at South Beach in April 2013, two years after the Great East Japan Earthquake and Tsunami ripped it away from Rikuzentakata’s marina. After finding out the boat belonged to Takata High School, students from Del Norte High School cleaned the barnacles off and worked with local business leaders to return the vessel to its owners.

Five years later, elected officials with Crescent City and Del Norte County entered into a Sister City pact with their counterparts from Japan.

Jurasz is part of a team of consultants working with Crescent City on the Proposition 68-funded expansion of Beachfront Park. In addition to a bike pump track, amphitheater and waterfront plaza, the park’s new amenities will include a retelling of the area’s original inhabitants as well as its history of mining, logging and fishing. 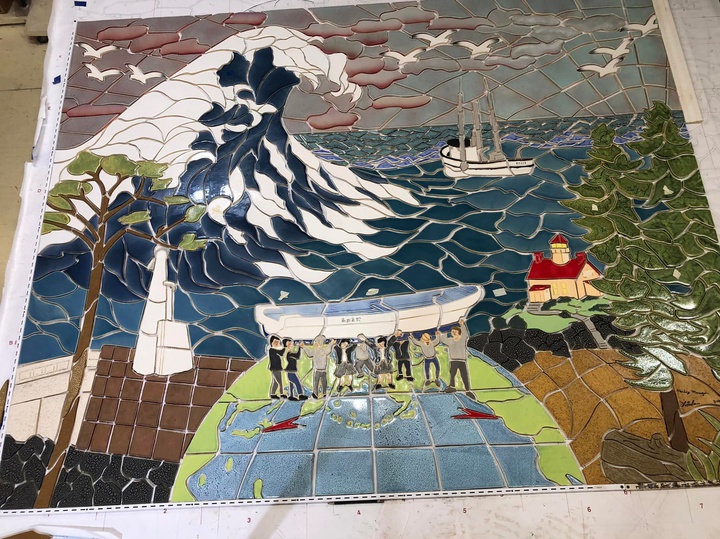 Crescent City plans to install this puzzle mosaic mural honoring its relationship with Rikuzentakata at Beachfront Park this spring. | Photo courtesy of Piece by Piece Pottery

The Paths of Culture will also include a Sister City monument featuring a puzzle mosaic mural of Kamome.

Speaking before the City Council on Dec. 19, Wier said even though the tsunami walking tour extends out of Beachfront Park, the city could use the Prop 68 per capita funding it had earmarked for the Paths of Culture to revitalize the tour.

“It’s a tight timeframe, but if you want to hit that 10th anniversary to have this done, to have this kiosk in time to put it in place so we can have it next to the mural we’re going to unveil with Harley Munger, we need the contract authorized tonight,” Wier told Councilors “The other piece of it is, the Sister City kiosk itself, they would completely design that one. They have all the information and can come up with the material and proof needed to go before the Council.”

Former mayor Ron Gastineau created the walking tour in 2014 to commemorate the 50th anniversary of the 1964 Good Friday Earthquake and Tsunami. The tour takes visitors to different places in the downtown area using the kiosks as well as video footage, audio interviews and historic photos to tell the story of the community’s survival.

Bill Stamps, who owned and operated KPOD-AM from 1963 until he passed in 2005, coined the phrase “Comeback Town USA,” getting the idea from various business owners who were confident they’d bounce back from the disaster, according to one of the audio recordings Gastineau gathered for the tour.

There’s a link to the tour on the city’s website, but many don’t know it’s there, Wier said. But, he said, the city “didn’t have any budget” when the 50th anniversary of the tsunami came around
Jurasz plans to redesign the kiosks, which includes a total of 16 panels, Wier said. He pointed out that all the panels would include the new tsunami inundation maps that came out in 2021.

When Gastineau came up with the original walking tour, Wier said he had envisioned each kiosk having a flag showing the height of the tsunami surges at that particular location. Though that didn’t come to pass, Wier said Jurasz has a similar concept in mind using aluminum flags that could withstand the elements.

The project, which includes updating the existing kiosks, building a new kiosk and website and hosting the website for four years, would cost $43,920, Wier said. There are several funding sources this money could come from, he said, including the city’s existing Sister City budget, which has about $12,000.

Funding for the project could also come from the roughly $200,000 per-capita Prop 68 grant or the $5 million Statewide Park Program Grant, Wier told the City Council.

According to Cindy Vosburg, executive director of the Crescent City-Del Norte County Chamber of Commerce, the tsunami walking tour map is the second-most asked for map the visitors center gives to tourists.

But, Inscore, who was new on the City Council for the 50th anniversary of the 1964 tsunami, said he feels the city didn’t realize the walking tour’s full potential. Anything that’s going to be a draw for visitors has to be appreciated by locals, he said, pointing out that residents will take family and friends to Stout Grove, Ocean World and Trees of Mystery.

“By re-doing the kiosks and maybe doing a better job of promoting it locally, I think its reach becomes even greater,” Inscore told the Outpost. “I’m not sure why I didn’t draw a closer parallel once I got involved with the Sister City stuff in 2016, but it is a natural extension — you can tell the story from ’64 all the way forward.”

The story goes back even further, Inscore said. Pointing out that the expansion of Beachfront Park includes a Tolowa interpretive walk, the park’s Paths of Culture feature could include oral history from Del Norte’s indigenous peoples about the most recent Cascadia Subduction Zone tsunami in 1700.

“Who else can tell a story centered on tsunamis that has over 300 years of history with multiple cultures on both sides of the ocean?” Inscore asked. “We have oral traditions that have been passed down by Native Americans where we live and written tradition in Japan where we have built this bond because of tsunamis.”