CASA to Use $25,000 Donation For Volunteer Recruitment, Bridge Gap In Funding 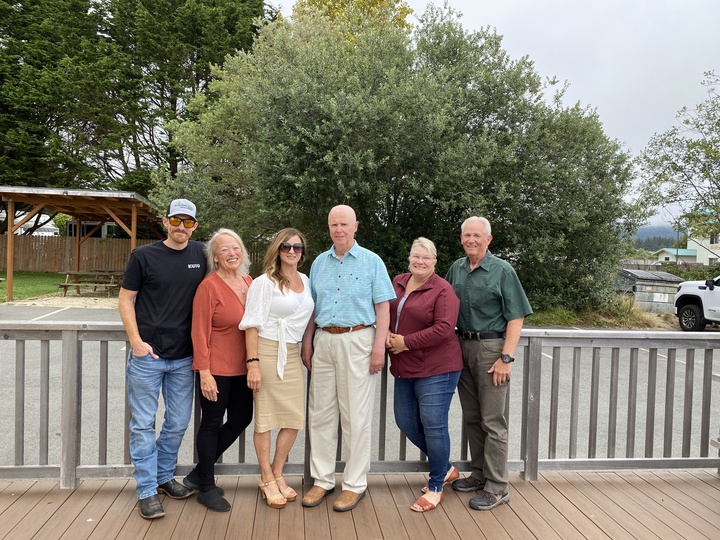 But while this donation from the Caldwell Clan Fund will enable the nonprofit to continue operating until it receives its Community Development Block Grant from the county, it’s in dire need of volunteers, Executive Director Christine Slette said.

Standing for Court-Appointed Special Advocates, CASA volunteers help guide foster children, including those who are abused and neglected through the judicial system. But the number of volunteers has decreased during the COVID-19 pandemic, Slette told the Wild Rivers Outpost.

Before the pandemic, between 30 and 50 percent of Del Norte County’s foster youth had a CASA advocate. Now, of the roughly 130-140 who are in the foster care system, about 23 have a CASA, she said.

“Our volunteer recruitment effort is ongoing and unfortunately it costs a lot of money to continually advertise and do outreach and try to recruit more,” Slette said. “It’s always an ongoing effort.”

CASA of Del Norte has a memorandum of understanding with the court to advocate for the children making their way through the foster care system. An advocate works with the foster parent, social services and educators on behalf of the child they’re assigned to, according to Slette. This includes making sure their charge’s educational, medical and mental health needs are being met, she said.

CASA volunteers are unbiased. They don’t work for the court and aren’t connected with the foster families or a child’s family, Slette said. CASA advocates are able to independently investigate the circumstances surrounding a foster child’s case and make sure they’re not falling through the cracks, she said.

“We always have a policy that anybody can call us at any time and can reach us through our website, CASADN.org, and there’s a contact form and they can send it to us and we’ll set up an information session,” Slette said. “Volunteering with CASA is also a great resume booster. You get a lot of free training, a lot of on-the-job experience with child welfare and at-risk kids and kids in general.” 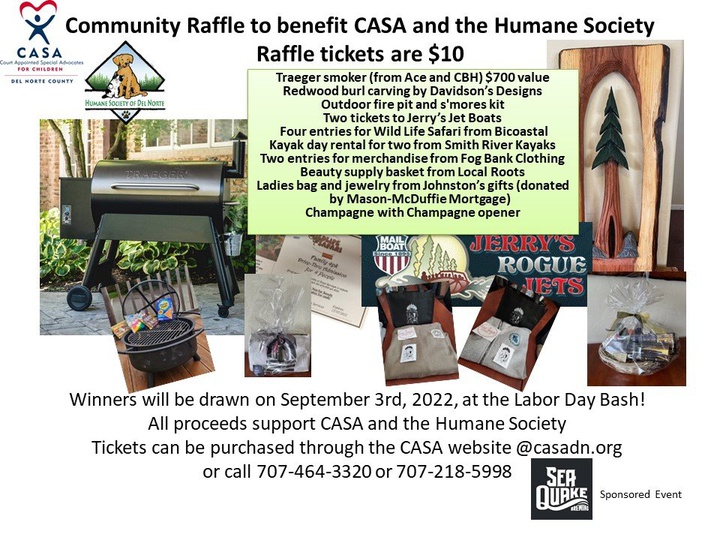 CASA of Del Norte County will hold a raffle fundraiser on Saturday. | Courtesy of casadn.org.

CASA’s paid staff is there to support the volunteers, Slette said. She noted that while social workers will have 25 to 30 cases, a CASA advocate may be assigned to one or two children. A CASA advocate may sometimes work with siblings, she said.

“We are a pretty high quality program and we do have a formal court filing process,” she said. “We have to meet court dates, and volunteers have the full support of the staff to do all this. That’s why we have paid staff.”

The Del Norte County Board of Supervisors has historically awarded $235,000 in CDBG dollars to CASA about every two years, according to Slette. At this time, she said, she has no idea when the organization will receive its 2021 funding, she said.

Del Norte County received notification recently that it was awarded a CDBG grant, said Administrative Services Manager Toni Self, but it’s waiting for the state issues its standard agreement for the county. This could take about 90 days. The Board of Supervisors will then decide how to allocate those dollars, she said.

It also received $5,000 from Walmart, according to Slette. She said CASA of Del Norte will use it for its Making Memories Program.

“That program helps us identify the needs of any foster child and this isn’t just kids that CASA’s serving. It’s any foster child that has a need that’s out of the box,” Slette said. “We have used funds to help a child get to go to Disneyland with their foster parents. Sometimes they just don’t have the amount of money to pay for five kids to go to Disneyland and, so, if we can help support that foster parent it relieves some of the pressure off them.”

CASA’s Making Memories Program also is used for local activities, like a trip to Trees of Mystery, or to get a teenager a bike so he or she could ride to work, Slette said.

“We helped another child get some stuff for their home,” she said. “She got to go back home with their grandparent and she didn’t have any items for them. So we used some funding to buy bedding and some stuff for a bedroom.”

Dr. Kevin Caldwell, who makes up the Caldwell Clan with his wife, Dr. Donna Sound, said CASA has always been on his list of organizations doing “good stuff in the community.” Over the years, they sponsor CASA’s annual golf tournament, but they felt they wanted to do more, Caldwell told the Outpost.

“If society’s going to survive, we have to make sure the kids do well,” he said, of CASA. “And they’re like the safety net to catch the kids that are in the most distress.”