A small Curry County community is in the midst of a vicious fight over the proposed addition of an indoor pickleball court at a private residence on the northeast end of Floras Lake in Langlois.

The Curry County Board of Commissioners heard from several concerned residents at today’s special meeting, before deciding how to move forward with the contentious pickleball court battle that’s been dividing neighbors in the area since 2017.

According to the residents who spoke at today’s meeting, the issue began more than a decade ago, when Floras Lake House By the Sea bed and breakfast owners Liz and Will Brady added a pickleball court to their property. The court, which was frequently used by the Bradys’ longtime neighbors John Little and Alberta Rose, eventually became a cause for noise complaints. 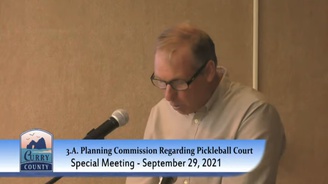 Floras Lake House By the Sea bed and breakfast owner Will Brady speaking at today's meeting.

“We know firsthand how loud [Rose and Little’s] games can be,” Will Brady told commissioners at today’s meeting. “So do the neighbors and even the campers in the campground. Because of this noise, we asked them not to play before 11 a.m. or after 3 p.m so they would not disturb our B&B guests.”

In July of 2020, Rose and Little began the process of filing paperwork with the county to build their own outdoor pickleball court at their property on Leeward Street. This idea drew heavy criticism from their neighbors, who had previously expressed concerns about noise pollution caused by pickleball matches.

“If I had to listen to that on a daily basis, I would go insane.” Will Brady said of the whacking and vocalizations that come with pickleball. “The Littles often said, ‘it’s the sound of happiness.’ Well, their sound of happiness is our sound of being in hell.”

Due to the noise pollution concerns, a number of conditions were tacked onto the proposed court by the county planning director, including what hours of day it could be used, who could use it, and the development of a sound abatement plan carried out by a licenced acoustical engineer.

After months of bitter disagreements, the plan for an outdoor court was scrapped and Rose and Little applied to build a 32-foot wide, 60-foot long RV garage standing 25 feet tall — an act that neighbors say was a deceptive move to conceal their pickleball plans.

Adjacent property owner Chip Shepherd, who appealed the county planning director’s decision to approve the garage in February, was also in attendance at today’s meeting and vehemently objected to the building, which stands to block his home’s south-facing countryside view. 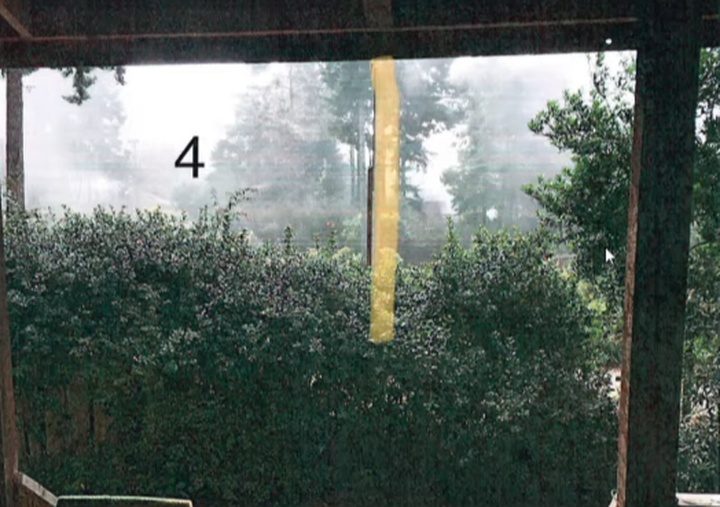 An example of where the building will be placed in relation to the Shepherd's home. | Photo presented at today's meeting 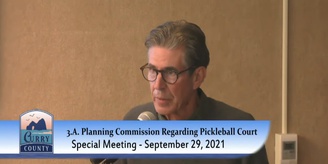 “They filed an application for an RV garage, not a pickleball court inside an RV garage,” Shepherd said. “In fact, the word pickleball was not in their application at all. Mr. Little certified that his application was correct. He knew it wasn’t correct, he knew he was going to put a pickleball court in there and, yes, he was trying to hide that fact. So either that was intentional, fraudulent, devious or mischievous, but it was certainly not full-disclosure of what his intentions were. We all suspected that, but it was not indicated in the application.”

John Little, who was accompanied at the meeting by his attorney Roger Gould, of Coos Bay, admitted that he plans to place a pickleball court inside of the proposed RV garage, but said that he was never trying to conceal that information. 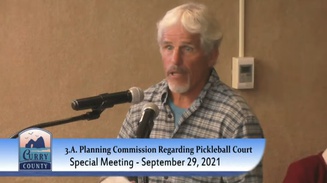 “We are not trying to hide an indoor pickleball court,” Little said. “We thought it was obvious by the building dimensions. And [when] the county planning department approved our permit application, they attached the conditions of approval from our outdoor court, making us think they knew there would be indoor pickleball playing in our building.”

The lengthy and fiery public hearing drew passionate responses from the Board of Commissioners, especially Vice-Chair John Herzog, who was brought to tears while giving his thoughts on the matter.

“It did break my heart to hear you folks ... that neighbor stuff,” Herzog said before openly weeping. “Sorry. I’m going through man-opause,” he added, drawing mixed reactions from the audience. “So sometimes I get a little emotional. That’s the saddest part about this whole hearing today, folks. I pray that there will be some healing. I know that our planning commision, along with our planning department can work this out for the betterment of the whole neighborhood.”

Chair Court Boice and Commissioner Chris Paasch also agreed that the county planning department is the most qualified government entity to mediate the situation.

At the end of the discussion, the board unanimously affirmed the planning director’s decision to require John Little and Alberta Rose to publicly disclose their pickleball court plans and apply for a conditional-use permit. This process will allow neighbors to address their issues with the planning commission before any buildings or pickleball courts can be approved.

Curry County Planning Director Becky Crockett will bring back a final order with a decision at the next scheduled Board of Commisioner’s meeting.