'If You're Positive, Please Stay Home'; COVID-Positive Individuals Coming Onto School Campuses and Into Pharmacies, Education and Health Officials Say » 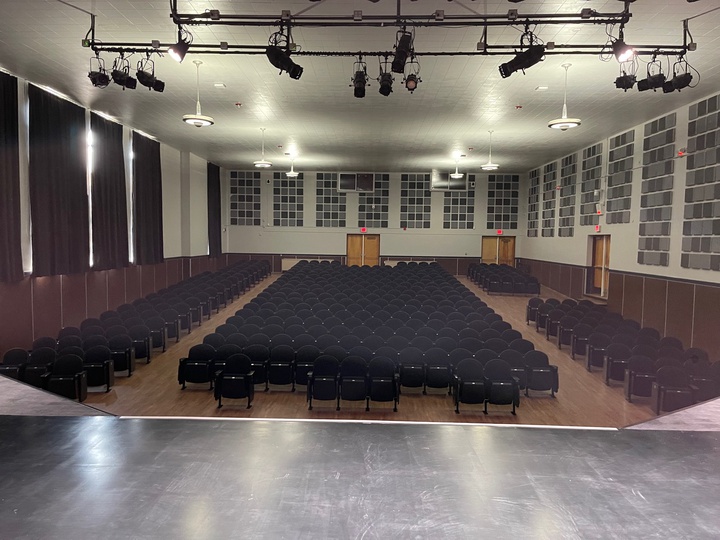 The newly-refurbished Crescent Elk Auditorium as seen from the stage. Photo courtesy of Steve Morgan.

An encyclopedia of partners from local arts representatives and music teachers to electricians and sound engineers helped bring the Crescent Elk Auditorium into the 21st century.

But because of the recent increase in COVID-19 cases locally, it will be a few weeks yet before the community can attend a concert or see a play at the facility, said Nick Rail, who, along with his wife Lisa, donated the funding for a new stage lighting system and new seats.

“The earliest we could possibly anticipate this is when the Six Rivers Christmas Tree is down on Front Street Park and turning that into an all-day event,” Rail told the Wild Rivers Outpost on Thursday, adding that the potential dates he has for that is Oct. 30 or Nov. 6. “The tree celebration is mostly during the day. We’re planning to do some workshops for kids at Crescent Elk during the day and culminate with some thank yous and so forth in the evening. The concert we were planning initially before Delta arrived was to have the high school jazz band, Tsunami Swing, the Pacific Music Guild and Katie Peña’s dance troupe from the high school all participate.”

However since Tsunami Swing and Pacific Music Guild concerts are on hold during the pandemic, it would just be the high school’s dance class and jazz band, according to Rail. Rail said he also hopes to get a special guest to Del Norte County, but said “we can’t pull the trigger on it yet because we don’t have a date.”

Rail was a student at Redwood Union School in Fort Dick in 1959 when he was introduced to music. He went on to become one of the largest retailers of musical instruments in Southern California, returning to Del Norte County when he retired.

Once there, Rail reconnected with DNHS music director Dan Sedgwick, who grew up taking lessons at his Santa Barbara store. 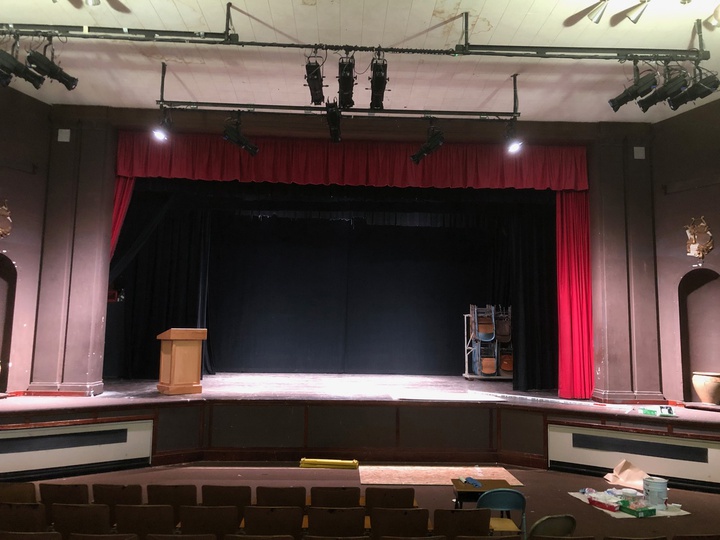 The Crescent Elk Auditorium stage as seen in 2020. Photo courtesy of Steve Morgan

They also founded the Nick and Lisa Rail Music Fund at the Wild Rivers Community Foundation with a goal toward raising enough funding to build a performing arts center at Del Norte High School.

On Aug. 12, Rail introduced a new nonprofit, the Partnership for the Performing Arts, to the DNUSD Board of Trustees. The Board unanimously approved a memorandum of understanding with the new nonprofit to collaborate on the proposed performing arts center.

Rail said the nonprofit hopes to raise about $24 million with most, if not all, coming from outside Del Norte County, toward the performing arts center project. The goal is to open the venue in 2028.

Meanwhile, Rail said he thought renovating Crescent Elk Auditorium would be a five year endeavor. Instead it took about 18 months and involved replacing the stage lights, seats, stage floor and the floor in the audience area, he said.

According to Rail, the new stage light system allows a production to be planned and uploaded onto a zip drive and plugged into the system at the school. He said he and his wife pledged about $150,000 toward that portion of the project.

Four-hundred and ninety-five wooden seats from 1929, some still sporting the wire rack for a gentleman’s top hat, were replaced with 385 new padded seats, Rail said. In addition to providing a more cushy place for the audience, the seats are 17 inches wide instead of 11 inches, he said.

They also include folding desk enabling a spectator to take notes, eat or have a place to fold their hands, Rail said.

“The only people who are going to lose on this may have been the Pacific Music Guild that were renting the cushions for a dollar,” he said. 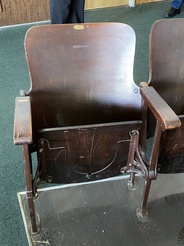 One of the original 92-year-old seats at the Crescent Elk Auditorium with a handy wire rack for a tophat. Photo courtesy of Nick Rail.

The auditorium also received a new electrical panel to replace the old one, which turned out to be the original from 1929, Rail said. The venue’s old windows were also from 1929 and have also been replaced with double-paned varieties.

The Crescent Elk Auditorium also received a new paint job and fiber reinforced plastic panels with soundproofing, according to Rail.