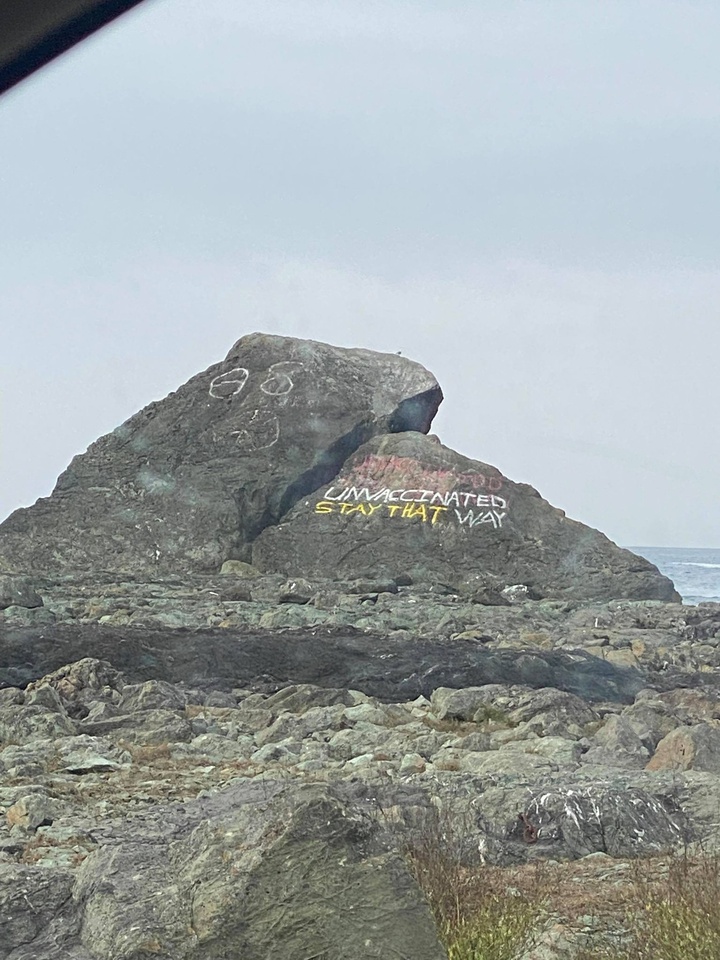 The recent graffiti left behind on the rocks near Preston Island in the Crescent City area. Photo courtesy of Heidi Kime.

Heidi Kime lives on one of the most scenic drives in Crescent City.

But, she says, recent transient activity between Preston Island and Brother Jonathan Point, including garbage, graffiti, people sleeping in cars, erecting tarps and cutting trails to the beach into the eroding hillside, make her feel unsafe.

Kime says law enforcement responds when she calls, but the Crescent City Police Department’s jurisdiction doesn’t include the foot of Preston Island — a rocky spit of land connected to Pebble Beach Drive by a narrow driveway winding down the hill.

The driveway, known as Skateboard Hill, according to Kime, is within city limits. The parking and tide pool areas at the bottom is county. Kime says she’s told to call the Del Norte County Sheriff’s Office.

“I get really frustrated,” Kime told the Wild Rivers Outpost on Friday after speaking in front of the Crescent City Council on Monday. “That morning at 7 o’clock, there were 11 vehicles down Skateboard Hill and at the bottom of Preston Island. There was a U-Haul there overnight, campers that were there overnight. There’s RVs and there’s loud music down there sometimes. It’s just sort of absurd that this trashing of this beautiful coastline is happening.” 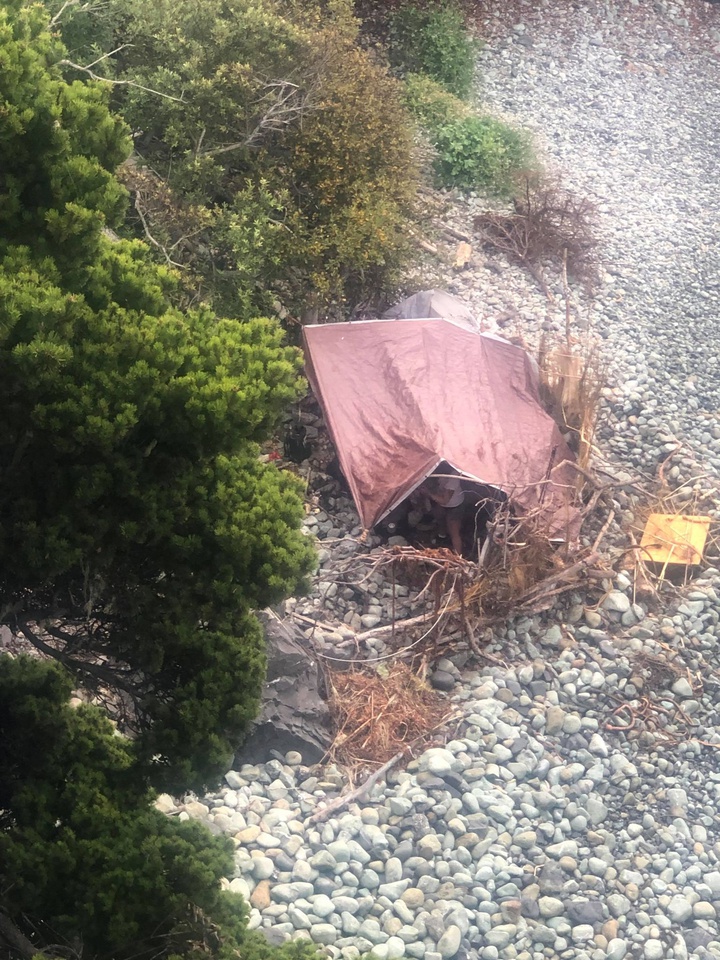 Starkey said she will bring the matter up at a “two-by-two” meeting that includes her colleague, District 1 Supervisor Darrin Short, and city representatives, Mayor Jason Greenough and Mayor Pro Tem Blake Inscore. The meeting will be held at 3 p.m. Monday, Starkey said, and though no decisions will be made, she welcomes public comment.

Kime’s neighbors, Craig and Judy Emerson also spoke before the Crescent City Council on Monday about the “homeless problem.” Craig Emerson said he was concerned about structures being built on the cliff and beach between Brother Jonathan Point and at the end of Del Monte Street, which is just outside the city limits.

Judy Emerson spoke about a black unhitched trailer that was parked near South Beach, also outside of Crescent City limits. She said she called the Sheriff’s Office repeatedly, providing license plate numbers, during which time the people that lived in the trailer had set up a tire swing and had tarps everywhere.

According to Judy Emerson, the people living in the trailer moved along after an overdose occurred, but people are now camping at Preston Island.

“There were 12 vehicles parked on Preston Island,” Judy Emerson told Councilors, adding people walking down to Preston Island often find needles among the debris left behind. “They’re spending the night and, yes, I’ve called the sheriff’s department on it. No response.”

According to Crescent City Police Chief Richard Griffin, those who complained before the City Council on Monday didn’t bring their complaints to his department first. He said his department didn’t receive calls for service specific to the concerns Kime and the Emersons aired.

“Which was interesting because we would have responded had we got calls for service,” Griffin told the Outpost, adding that he will participate in the two-by-two meeting between the city and county on Monday. “If there are violations we can correct we do, or we move people along if they overstay the limits as far as oversize vehicles or a three-day parking limit. If there’s trash, we’ve cited people for littering.”

“I understand the frustration,” he said, adding that the California Penal Code requires the Crescent City Police Department to stay within its jurisdiction. “Our jobs are to stay here.”

Del Norte County’s new sheriff, Randy Waltz, said he will participate in the two-by-two meeting as well, though he’s not familiar with any complaints his office may have received.

Griffin encouraged Crescent City residents to continue to report criminal activity even if they think it’s bugging his officers.

However, he said, his officers can’t move people along if they’re not doing anything criminal.

Kime said she and her neighbors do call law enforcement when they see something that’s concerning. She acknowledged that it’s difficult to get to the cove between Brother Jonathan and Preston Island, but she said the Crescent City Police Department’s four-wheeler should be able to stand it.

Kime also noted that anyone camping in that area is vulnerable to sneaker waves.

“We are exhausted from having to constantly call it in, and that’s the response my neighbors get as well,” she said. “To me, it’s sort of inconceivable that as they’re patrolling the community, they don’t notice these things. I don’t understand why it has to be complaint initiated.”