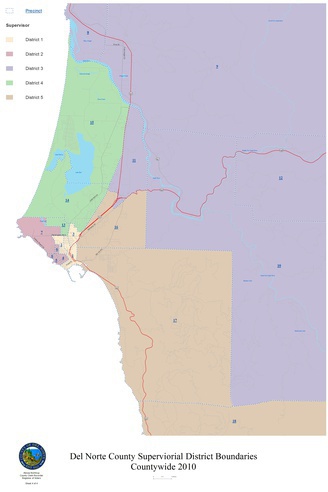 The advisory commission tasked with helping county supervisors ensure each resident had equal representation will try to define “community of interest” on Saturday.

This step is necessary as Advisory Redistricting Commission begins to draft maps with new district lines, which is anticipated to happen on Tuesday. But the public input commissioners need has been sparse so far, Deputy County Counsel Autumn Luna said Friday.

“What I’ve heard is even bigger counties with much bigger populations have had a hard time getting engagement with people on this idea of communities of interest,” she told the Wild Rivers Outpost. “So far, we haven’t gotten a single response even though we talked about it at two meetings. We’ll talk about it again tomorrow.”

The Advisory Redistricting Commission will meet at 10 a.m. Saturday and at 6 p.m. Tuesday. Both meetings will be held at the Flynn Center, 981 H Street in Crescent City. The meetings will also be available remotely via its website.

Required under the U.S. Constitution’s Equal Protection Clause, the redistricting process takes into account Del Norte County’s population as of the 2020 Census and redraws supervisor district lines to ensure each person is equally represented.

Those maps will also be available to the public before the Board of Supervisors makes a final decision, Luna said.

According to Luna, a community of interest could be based on geography and a “shared neighborhood sense” — she used the Bertsch-Oceanview area as an example.

Other communities of interest could include Del Norte’s tribal areas such as the Yurok Reservation, Tolowa Dee-ni’ Nation and Elk Valley Rancheria.

A community of interest could also include the Hmong community living in the Crescent City area and the Hispanic farming community in Smith River, said Del Norte County Clerk-Recorder Alissia Northrup.

“If they want to have any input they need to be there,” she said. “Because ultimately this is an advisory committee. We’re going to put these (maps) forward to the Board. That doesn’t mean they will accept them.”

“We’ll show this tomorrow at the redistricting meeting and be working with it in front of the ARC members and the public so you can see what I’m talking about,” Luna said. “There are hundreds of blocs in Del Norte County. Each district has maybe dozens of blocs or more.”