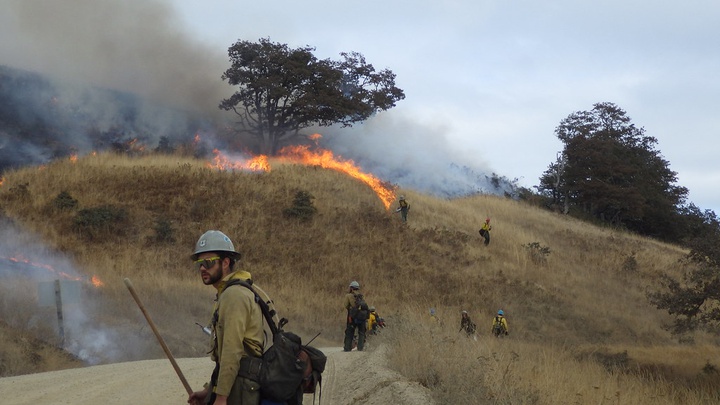 People traveling up Bald Hills Road between Orick and Weitchpec may see extra equipment and smoke within Redwood National Park boundaries this month.

Redwood National and State Parks plan to start their fall series of prescribed burns in the prairies and oak woodlands in the eastern part of the park.

According to a RNSP press release, burning is an important tool to keep Douglas fir and other conifers at bay.

From a RNSP press release Wednesday:

Redwood National and State Parks will conduct a series of prescribed burns this fall in the prairies and oak woodlands of the Bald Hills east of Orick. The prescribed fire season in the parks normally begins in early October as weather conditions permit.

This year the potential exists for fire to be used as a management tool in eight specific burn units in the Bald Hills: Schoolhouse, Coyote, Elk Camp, Childs, South Boundary, as well as Upper and Lower Lyons. All eightunits combined total approximately 2,558 acres.

For thousands of years, Yurok, Tolowa, Chilula, and Hupa people managed prairies and oak woodlands, and some coastal areas that are now within the parks with periodic fire to keep them open. Intentional burning provided grazing and hunting areas for elk and deer, maintained important resources like tanoak trees and various basket weaving materials, kept trail and travel corridors open, and lessened the prevalence of parasites, such as ticks, in the prairies. Early settlers who homesteaded the prairies continued the practice of broadcast burning until it was outlawed by the state in the 1930s. Since then many of the prairies and oak woodlands have become encroached with Douglas fir and other conifers, which can eventually eliminate these important plant communities.

The park’s 2015 Fire Management Plan provides for the use of fire to restore natural and cultural processes, to manage exotic plants and conifers encroaching into prairie and oak woodland plant communities, and to interpret and educate the public about the role of fire in the parks. The parks have successfully used prescribed fires to achieve these objectives since the early 1980’s.

If you are in the parks over the next several months, there will likely be additional activity and equipment on and near Bald Hills road. Smoke may linger on the roadways and traffic control may be in place. Please be cautious for your safety as well as those working on the prescribed burns.

To learn more about the role of fire in the redwoods, check out the parks’ website at: https://www.nps.gov/redw/learn/management/