Chico Couple Swept From Crescent City Jetty On Nov. 7 Praises Rescuers' 'Group Effort' For Getting Them To Safety

Video of the rescue provided by a reader. 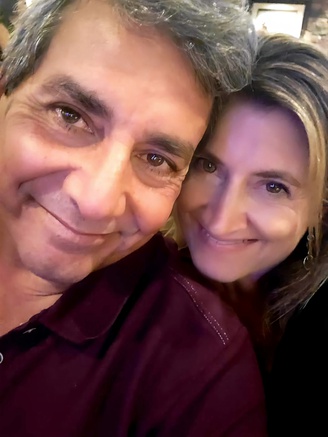 A Chico couple says they’ll be forever grateful to those who got them to safety after a wave swept them off of the jetty and onto the rocks in Crescent City earlier this month.

Gary Charlesworth and Julie Limper were on a day trip, exploring the B Street Pier and the beach near Battery Point Lighthouse, on Nov. 7 when they ventured out onto the jetty to enjoy the views. They were about 150 yards out with people on either side when a wave crashed over the jetty sweeping them into the water.

The couple had been clinging to the rocks on the harbor side of the jetty in frigid water for about an hour before rescuers could pull them onto an emergency raft, according to Del Norte County Sheriff’s Office Sgt. and Search and Rescue Coordinator Ed Fleshman.

In a letter to the Wild Rivers Outpost on Friday, Charlesworth called the rescue effort a “spectacular show of how a rescue should be carried out”:

On November 7th 2021, my girlfriend and I were visiting the Coast on a day trip to Crescent City, California. We arrived in the area at approximately 11 a.m. and proceeded to the beach. We stopped at a nearby public beach and walked on the sand for about 20 or thirty minutes enjoying the cool but clear morning.

From that vantage point, we noticed a lighthouse just down the road, perhaps a mile or so away, and decided to head down that way to take in the sights at a closer vantage point. Upon arriving there, we were pleased to see a pier, which we drove out onto, parked and enjoyed the beautiful scenery along with many other people. After a brief visit we decided to head toward town to get some breakfast as we hadn’t eaten yet.

As we made our way off the pier, we noticed a large concrete jetty/walkway where many people were walking atop, enjoying the ocean and harbor views. We decided to stop on the pier road, park and take a quick look.

We parked adjacent to the start of the jetty and walked over to it.
We were enjoying the views along with many other tourists, when we decided we had seen enough and were ready to go find a restaurant.

It was at that time that our lives would change. We were approximately 150 yards out on the jetty. There were people on either side of us, but as a giant wave approached we were in the wrong place at the wrong time. I held Julie’s hand and said, “run,” but we were no match for the great force of water that completely swept us off the jetty.

The force completely swept Julie over the rocks on the other side and into the harbor water. I was swept right into a large rock formation where I collided on the left side of my body, then was pushed down forward onto the rocks below.

It was a devastating one-two blow. As soon as the water subsided, I could hear Julie crying out and saw that she was in the water. She was trying to swim in, but being fully clothed, jacket and all, she was struggling. I made my way into the water to assist her in exiting the frigid ocean water and helping her onto the rocks. We were cold, scared, traumatized, in disbelief, but also concerned that other waves could come and push us back in.

I helped her to make our way up the rocks so we could find some safety against the jetty wall, so upcoming waves would “waterfall” over us instead of into us. Unfortunately that “safety” area was in the shade, but something told me it was the safest place to be.

Immediately we were calling out to other jetty observers and they motioned to us that they were already calling for help. Thank God for their quick response and fast actions.

Within two minutes, a harbor patrol boat arrived to help.
They threw some life jackets to us, which we donned immediately. They were unable to dock on the rocks or to reach us personally but just knowing that they were there within voice reach was amazingly up lifting.

Julie was hurt badly. I could see the blood flowing through her ripped pants at both knees. She was also having a very hard time moving and was concerned that she may have a broken back.

Being a registered nurse, I respected her assessment and tried to keep her still and safe while trying to comfort her. As time went on, more and more rescue personnel showed up. There were ambulances, fire trucks, Search and Rescue vehicles and the opposite side of the harbor was full of onlookers.

To my surprise and horror, there were also rescue personnel above us on the jetty.

These rescuers had put themselves in the very position where our tragedy had just occurred. The courage of these people, the dedication to saving us, was beyond belief. Literally putting their lives on the line for us.

I am crying my eyes out right now as I am writing this, thinking of their courage and commitment.

Thank you! As much as they tried, the height difference was just too vast to be able to reach us. Twenty-30 minutes had now passed and hypothermia was setting in.

We were both freezing up, when we noticed the launching of a yellow rubber boat with two rescuers rowing their way toward us. It took about 4-5 minutes for them to reach us, but when they did it was an amazing feeling.

It was still a precarious situation, trying to get two frozen broken people through the rocks and into the little rescue vessel.

But then, he appeared. As I think back on this next moment, the A-Team music starts playing and the superhero of the day emerges. Please please don’t get me wrong, all of you who responded are definitely heroes, but this guy was sent from heaven. I first saw his boots coming down the ladder that was based on a rock above my head. From that rock, he jumped off it, over 6 feet, and onto other rocks and began to guide me toward the rescue boat.

I informed him Julie was hurt worse, so he immediately went to her and tenderly, yet with great intent, muscled her to the rescuers at the boat and she was seated toward the rear of the boat.

He then turned his attention to me, and picked me up off my feet to aim me in the direction I needed to be, to find my path to the boat, while assisting me the entire way.

What a group effort! What a spectacular show of how a rescue should be carried out! No words can express our gratitude for all involved. From the phone caller to the ambulance EMT who cared for us with caring and lighthearted humor which let us know that we would be okay.

She was truly amazing also. Thank you could never cover how we feel. Thank you are just words. You all saved our lives and our families and we will be forever grateful.

I am writing this on the day after Thanksgiving, which took on a whole new meaning this year. Our hospital stay was for four days, our care was impeccable, professional and life-saving. Turns out Julie’s original assessment was correct. She has a fractured L1 vertebrae and required stitches and staples in both knees as well as being bruised up pretty much everywhere.

She has just started walking on her own without the need of the walker.

Turns out the initial contact with the first rocks broke all 9 ribs on my left side and my left scapula (shoulder) which only hurts when I breathe.

Thank God for the adrenaline that my body naturally produced which allowed me to help my love, who was much more in need than I was at the time. We are now home, back in Chico, CA, visited by family every day and friends, telling our story of the great rescuers, nurses, doctors, X-Ray people and the friends we met in the hospital that did their jobs in an extraordinary way, many of which I will stay in contact with for the rest of my life.

Thank you all. God bless you all. Julie and I are grateful every day. Grateful to be alive, extremely grateful that human kindness is alive and well.