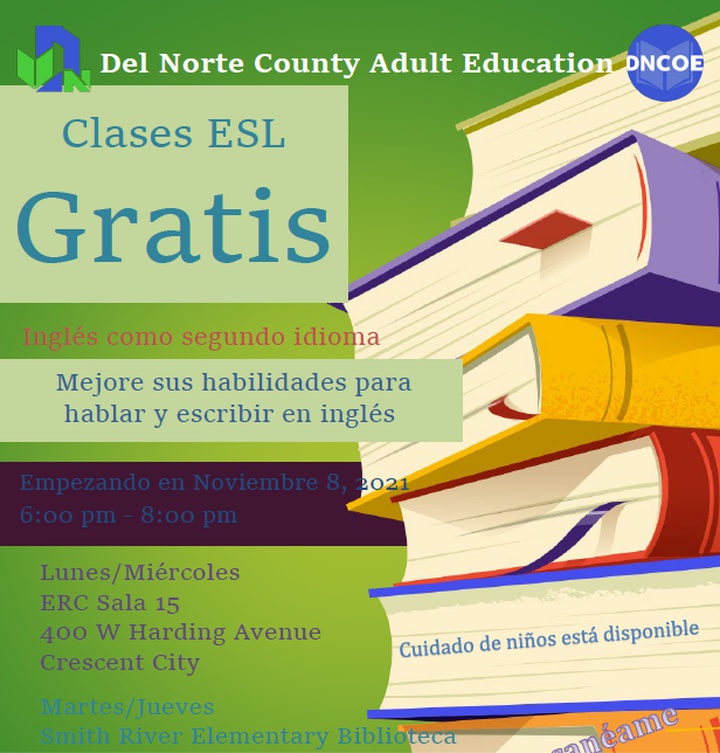 The Del Norte Office of Education will offer ESL classes in Crescent City and Smith River starting Monday. Flyer courtesy of the DNCOE.

In previous years, the Del Norte County Office of Education would offer adults wanting to learn English as a second language access to the online program, Rosetta Stone.

But while a few people were interested, most wanted to be in a classroom, said Tom Kissinger, assistant superintendent of educational services.

“People really wanted to participate in a live class where people are learning together, they get to connect with the instructor and to really engage in discussion,” said Kissinger, who taught ESL for about a year. “In a class like an ESL class, students learn from each other just as much as they learn from the instructor.”

The Adult Education Program will offer four two-hour classes a week starting Monday at the Education Resource Center in Crescent City and at the Smith River School library, according to Principal Randy Fugate.

“They really requested an in-person program as opposed to a Zoom-style (class); that was important to people weighing in,” he said. “Some voices said, ‘Yes, we want in-person, but we also want to accelerate. I would love some of my own computer time to practice at home.’ So we’re offering both in person and we’re also checking out ChromeBooks to adults who want to continue to hone their skills at night.”

The instructor, Dawn Wirt, has taught ESL in Eugene, Oregon for about eight years, Fugate said.

It was Clark, a former ESL instructor for College of the Redwoods, who pushed for a new program through the Del Norte County Office of Education, according to Campbell-Blair.

Clark said his students found going through CR’s application process difficult. That, he said, hindered his efforts to urge students to enroll in the program.

The DNCOE is more flexible, innovative and closer to the community when it comes to its ESL classes, he said.

“I’m going to be moving,” he said. “I’m not going to be participating in teaching the program. This was something I really wanted to do out of respect to my students.”

When he was a teacher, Clark said, 19 to 20 students would attend his class every night. They came from all across the globe, too, he said.

“I had students in my class from Mexico, Colombia, from El Salvador, from the Ukraine, from Kalmykia, from Iraq and Iran — that was my experience just in Del Norte County,” he said.

Yepes Contreras said she had Chinese-speaking and Hmong-speaking students in addition to the Spanish speakers who attended her class when she taught ESL.

Campbell-Blair said True North’s outreach drew interest from Del Norte residents who were originally from Russia and a man whose first language is Arabic.

“I think it’s really interesting the diversity of languages in Del Norte, more diversity than people realize,” she said.

Fugate noted that the ESL classes aren’t part of a degree program and are not offered for-credit. Students get what they put into it, he noted.

“As I’ve talked to ESL instructors, they don’t come in with a set curriculum,” he said, adding that instructors often tailor their classes to their students. “If they’re really looking to enhance their business language, they’re going to work that into their program for them. If they want to enhance their vocabulary around the culinary industry, they’ll work with that.”

Pelayo, who conducts outreach for True North, knocking out doors and handing out information, said he had a spreadsheet of 15 students who really wanted to attend. He told Fugate and Kissinger that people he’s spoken with are eager to start class on Monday.

“My main outreach has been in Smith River,” he said. “That’s a group that’s for sure going to show up on Nov. 8 and for the first day in Smith River.”