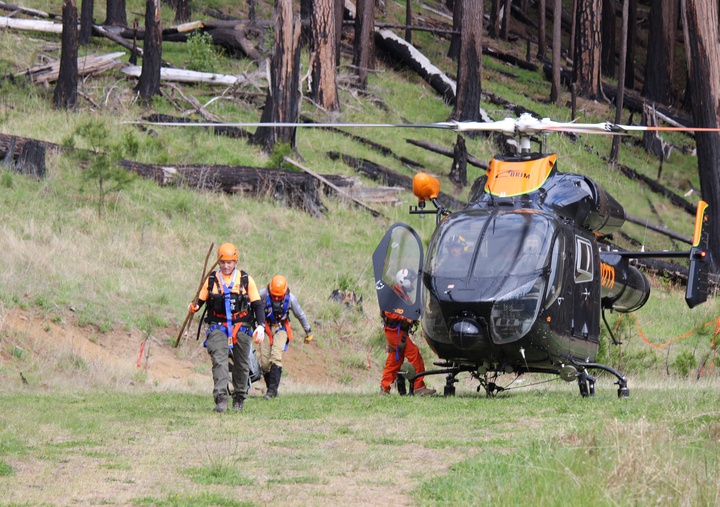 A 69-year-old man was found in the Douglas County wilderness after he spent 17 nights there.

After 17 nights in the wilderness, 69 year-old Harry Burleigh has been found alive and rescued by Search and Rescue crews who never gave up.

On Sunday, May 23, 2021, Douglas County Search and Rescue conducted another mission in the area of Calf Creek after Burleigh's fishing gear was found last weekend. Additional SAR resources were called in from Jackson County, Lake County and Siskiyou County (CA) for Sunday's efforts.
At approximately, 3:00 p.m., a team of searchers from Jackson County SAR located a shelter southwest of the original shelter found last weekend. The search crews called out to Mr. Burleigh who responded back. He was found to be walking and complaining of minor pain, but was in stable condition. A Brim Aviation helicopter was utilized to hoist Burleigh from his location and transport him to a waiting Lifeflight helicopter. Lifeflight later transported him to an out of area hospital for evaluation.
The Brim Aviation helicopter was utilized to extract the remaining Jackson County SAR team from their position. The other search crews were able to self-extricate.
"This was the outcome we all have been looking for in this case. It is because of our determined Search and Rescue Teams and the partnerships we have with other SAR teams from around the state, that Mr. Burleigh has been re-united with his family this evening," Sgt. Brad O'Dell said. "The Sheriff's Office wants to thank everyone who was involved in this mission."
Over the course of the search for Mr. Burleigh, the Douglas County Sheriff's Office Search and Rescue Team was assisted by the following entities:
Jackson County SAR
Josephine County SAR
Modoc County SAR (CA)
Del Norte County SAR (CA)
Siskiyou County SAR (CA)
Curry County SAR
Klamath County SAR
Lake County SAR
Lane County SAR
US Coast Guard
Oregon State SAR Coordinator
Brim Aviation
Lifeflight
United States Forest Service
Wolf Creek Job Corp. Hotshots
Bay Cities Ambulance
Rescue crews would like to remind everyone of the 10 essentials for survival, which include:
Navigation (map, compass, GPS, personal locator beacon, etc)
Headlamp/flashlight
Sunglasses and sunscreen
First-aid supplies
Fire (the means to start and sustain a fire)
Knife
Shelter (tent, garbage sack, tarp, etc)
Extra clothing
Extra food
Extra water