RIP: Marina, a Rescue Seal Who Has Lived at Ocean World These Last 21 Years, Has Passed » 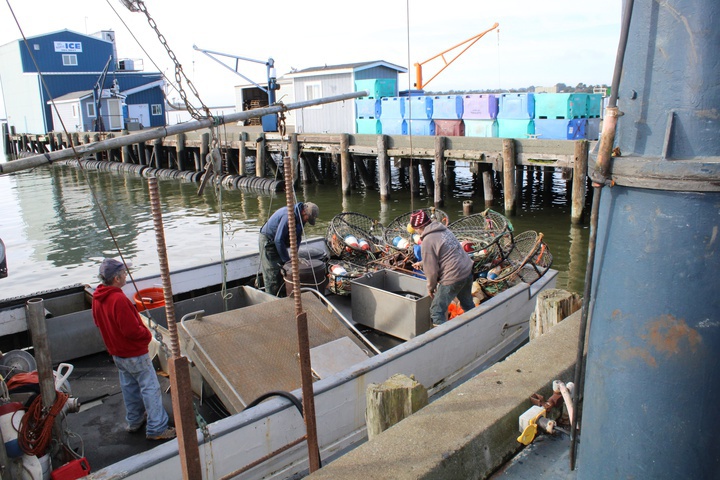 The FV Moray pulls up at Citizens Dock after a disappointing start to the Dungeness crab season on Jan. 15. File photo: Jessica Cejnar

Del Norte County crab fishermen will wrap up a mediocre season about six weeks earlier than normal due to an order from the California Department of Fish and Wildlife director.

This decision was not what the California Dungeness Crab Fishing Gear Working Group recommended, said Del Norte County District 4 Supervisor Gerry Hemmingsen, a crab fisherman who is part of the working group. While many crab fishermen pulled in their gear earlier than normal, the few that are still fishing will be impacted by this decision, he said.

“At the last working group meeting, we had the director put a depth restriction in our area because the whales were shown to be around the 50-fathom curve,” Hemmingsen told the Wild Rivers Outpost on Thursday. “The additional information we got supported the same indication that the whales were out in 45 fathoms… why the director decided to close the area when he did have the information, I think, it was a little concerning.”

According to a CDFW news release, all commercial crab gear must be removed from California fishing grounds by June 1. Bonham also authorized the Lost and Abandoned Gear Program to start removing commercial gear left in the water on June 7.

Despite his decision, Bonham acknowledged the difficult season many commercial crab fishermen have had.

“I recognize that every day of lost fishing further impacts families and small businesses,” he said in a written statement. “I acknowledge the sacrifices and resilience of California’s fishermen and women and look forward to continuing to work with the fleet and the Dungeness Crab Fishing Gear Working Group to minimize entanglement risk while maximizing opportunities.”

Since 2015, CDFW has worked with commercial fishing representatives, environmental organizations, scientists and other stakeholders to reduce the risk of whales and sea turtles becoming entangled in crab gear.

The department’s efforts under the Risk Assessment and Mitigation Program, or RAMP, correlates to a drop in entanglements from a high in 2016 of 22 confirmed cases involving humpback and blue whales and leatherback sea turtles to zero confirmed entanglements this season, according to the CDFW news release.

Hemmingsen said he’s been part of the working group since it began. Though he didn’t agree with Bonham’s decision — reiterating that it wasn’t the group’s recommendation — Hemmingsen said it’s a no-win situation for Bonham.
But, there have been few incidents of whale entanglements since the group was established, Hemmingsen said.

“I wouldn’t want to be in his shoes,” Hemmingsen said of Bonham. “If a whale gets entangled because of his decision, then the fault’s going to be on him. It’s a tough decision to make. I was not particularly happy with his decision, but I can’t say it was the wrong decision.”

According to the CDFW news release, the department has conducted 10 assessments to evaluate entanglement risk during the 2020-21 fishing season. Improved ocean conditions, along with engagement of the commercial fishing fleet and regulatory changes have “likely contributed to the reduction in entanglements.”

The Dungeness crab season between Fort Bragg and the Oregon border typically starts Dec. 1. This year, due to poor quality and price negotiations with seafood processors, crab fishermen on the North Coast didn’t start fishing until Jan. 15.

“Everybody only fishes for a couple months and then some boats have other fisheries, but probably 50 percent of the fleet stays crabbing,” Shepherd told the Outpost. “This year, a lot more of the boats quit crabbing early this year because of the poor season.”

During a discussion about the harbor’s solar panel installation on Tuesday, Shepherd said one meter didn’t perform as well as expected because the companies using it unplugged freezers that held the squid, mackerel, sardines and other bait crab fishermen rely on.

“They fire them up in November and fill them up with bait — the boats use upwards of 500-600 pounds of bait per day,” he said. “That meter was on those bait freezers alone. They take a lot of power to run.