Most Prison Staff Refuse COVID Vaccine -- Should California Let Them? »

'It’s Emotional and It's Not For the Faint of Heart'; True North Committee Embarks on Getting Patrick's Point, Fort Humboldt, Peacock Bar Renamed in Local Languages 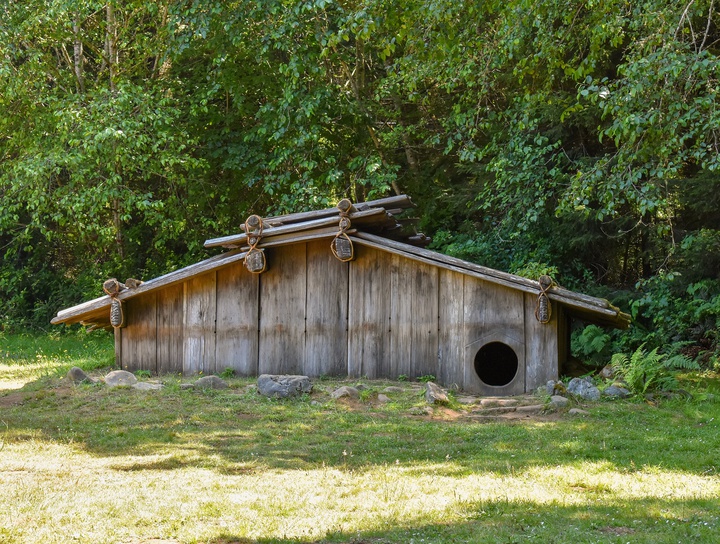 Patrick's Point State Park, where Sumeg Village is located, is one of the state park units True North Organizing Network is proposing to rename. Photo courtesy of California State Parks.

The committee is also inviting local tribal representatives in Humboldt and Del Norte counties to weigh in on the process and to suggest other California State Park units that should be renamed. A “Virtual Village” meeting to discuss and put forth other potential name changes is set for May 19.

“It’s really great that True North is helping to organize our local region and tribes and other faith-based groups to see this through and hold the state accountable,” said Amanda O’Connell, the Tolowa Dee-ni’ Nation’s historic preservation officer. “Or maybe guide them — give them some guidance in how to achieve the reconciliation of these injustices.”

According to O’Connell, movement on the part of the state to acknowledge institutional wrongs visited upon Native Californians began in 2011 when then-Gov. Jerry Brown signed the Tribal Consultation Executive Order. It continued 2019 when Brown’s successor, Gov. Gavin Newsom, established the California Truth & Healing Council, O’Connell said.

This includes establishing a state committee tasked with recommending changes to geographic names in California and came amid a national conversation around monuments affiliated with the Civil War.

“Recent protests over racial inequality have spurred a national conversation about institutional and systemic racism in the United States. That conversion includes a new reckoning over monuments, symbols and names found in our public spaces,” Crowfoot said in the Sept. 25, 2020 news release.

In the case of Patrick’s Point State Park, though there’s some dispute about whether this is the “right Patrick,” the man it may have been named for, Irish homesteader Patrick Beegan, was an “‘Indian scout,’” according to True North Lead Organizer Kevin Malone.

“We did background research, it’s an odious story,” Malone told the Outpost. “What this guy did was crazy. What we don’t know with, I guess, 100 percent certainty is that this is the Patrick…”

True North intern Evan Morden noted that Patrick’s Point’s brochure tells visitors that they are visiting Yurok territory and that the people made a remarkable recovery.

“Yet it’s still named after a white person,” Morden said. “If this is a state park that’s about working with the Yurok people, I think it’s important to listen to them about how that park is named.”

Though the committee members had reached a consensus that names need to change, there’s still debate over language pronunciation and spelling. This, Marnie Atkins, the Wiyot Tribe’s cultural center manager, said is because indigenous people have had to work hard to reclaim their languages and cultural practices.

Take Suemeeg Village, the proposed new moniker for Patrick's Point State Park. A lot of people, Native and non-Native, are familiar with Sumeg Village, which was built by Yurok tribal members and is used as a teaching center, Supahan said.

But according to Inter-Tribal Organizing Committee member Skip Lowry, the Yurok Tribe has said the proper name for that village site is Suemeeg, not Sumeg.

The discussion over the proper name for Suemeeg Village is an example of something many people don't get to see, Atkins said.

Atkins noted that people may be confused about why her tribe and other indigenous peoples want to change place names. But, she said, they’re not changing the name.

“We’re trying to reclaim these places, these practices or these languages, and it’s messy,” she said. “It’s emotional and it’s not for the faint of heart. It’s turmoil, but we always figure it out. We always come together in some way and then we present to the greater public what it is we want.”

Speaking for herself, Atkins noted that Fort Humboldt was a violent and devastating place for her Wiyot ancestors. Many were imprisoned there, she said. Atkins also mentioned other geographic names that disparage Native Americans, such as Dead Indian Creek and Blood Creek.

“Why might it have been named that?” She asked. “Probably because a massacre happened there and turned the river red. These kinds of things are a violent reminder of history. We need to remember history, just as I said, so we don’t forget and we learn, but there’s better names that we can call it and build our education around those names.”

According to Supahan, the "Virtual Village" community meeting set for May 19 is about receiving feedback from tribal representatives on the three sites proposed for name changes and to suggest other areas that need to be renamed. The organization’s Inter-Tribal Organizing Committee will then make a presentation before the California State Parks Commission in August or September, he said.

There may be some lower-hanging fruit, however, according to Malone. It’s possible Peacock Bar’s name can be changed by the local state parks superintendent. But, he said, it’s important to have the conversation and to bring non-native post-colonization residents into it as well.

“We have a role in it too,” Malone said. “This kind of structural and institutional racism lives today and it lives in these names and in our history and it’s going to take all of us to come together. We can’t have healing and reconciliation without acknowledgement and accountability and beginning to talk about making things right.”