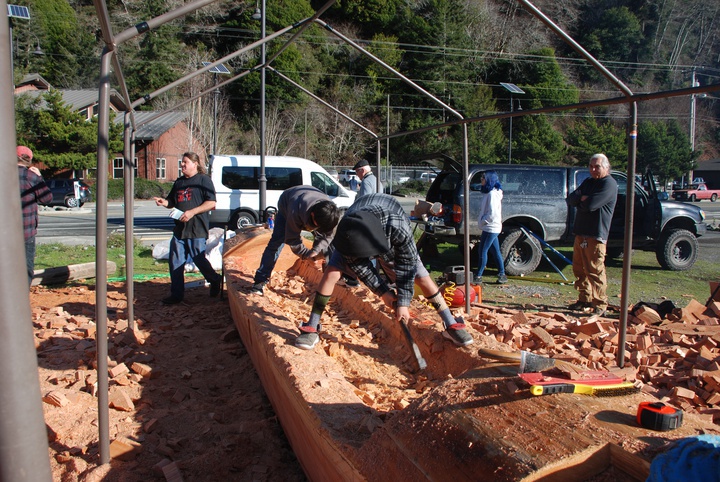 Segep and Chuhls Bates hollow out a redwood log using an adze in this 2019 photo, creating a canoe for the Yurok Tribe's redwood canoe tours. File photo: Jessica Cejnar

Though it’s still tentative, the Yurok Tribe is planning to start its redwood canoe tours in June, a year later than originally planned due to the COVID-19 pandemic.

The Redwood Yurok Canoe Tours will begin with two canoes that will hold roughly three passengers each and will run three tours per day Wednesday through Sunday from June 2 to Sept. 5, according to Josh Norris, tourism manager with the Yurok Economic Development Corporation.

“We haven’t got the 100 percent green light from admin that we’re opening up stuff on the reservation here, but we’re pretty certain it’s going to happen,” Norris told the Wild Rivers Outpost on Wednesday. “We’re pretty sure we’re going to be open, but who knows what’s going to happen.”

A redwood dugout canoe is a member of the family in a Yurok household and is the highest price a Yurok man would pay for a wife, canoe builder David Severns told the Outpost in December 2019, roughly six months before the tribe expected to begin offering tours. It has a nose, heart, lungs and kidney, he said.

The logs used to construct the canoes are from old-growth trees, Tribal Chairman Joseph L. James told the Outpost in December 2019. The tribe and U.S. Forest Service entered into a partnership to use the logs for the tribe’s redwood canoe tours, according to James.

On Wednesday, Norris said the tours will be about two hours and will start at Redwood RV Park in Klamath. Depending on conditions, visitors will explore the Klamath River estuary, the old Klamath townsite and the old U.S. 101 bridge that was destroyed in the 1964 flood. Visitors will also view local wildlife and learn about the history and ecology of the area, Norris said.

“There might be other features as well — some storytelling, perhaps,” he said. “We’re going to talk about the canoe, the construction of the canoe and the significance of the canoe to Yurok people.”

Though there isn’t a start date yet, the Yurok Tribe plans to start its Klamath River Jet Boat tours this tourist season as well as the Redwood Hotel and Casino, Abalone Bar and Grill and its campgrounds including Riverside and Redwood RV parks, Requa Resort, Bluff Creek Resort, Shoreline Fuel Mart in Orick, as well as

Pem Mey in Klamath and Pec-tah market in Weitchpec.
For more information about canoe tours, including the price, click here.