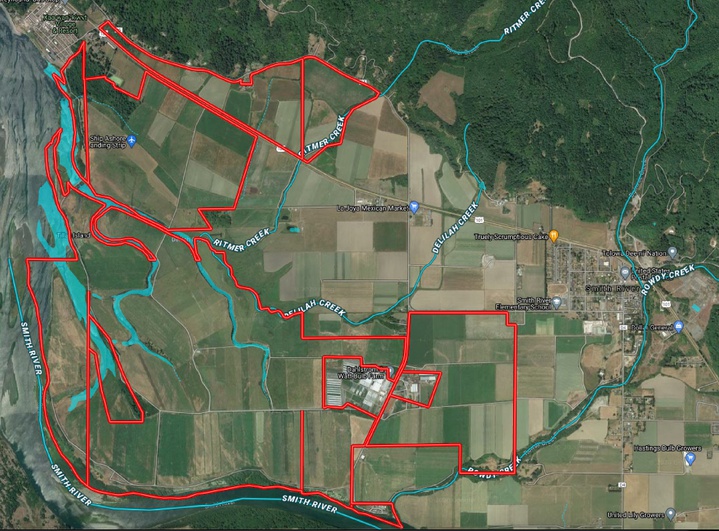 Though its current owners are negotiating with the California Coastal Commission over Coastal Act violations dating back to 2016, Reservation Ranch is on the market, and the Tolowa Dee-ni’ Nation is seeking help to procure it.

The Tolowa Dee-ni’ Nation is seeking signatures on a petition to repatriate the 1,668-acre dairy ranch that has been owned by the Westbrook family since the 1850s. The tribe is also seeking monetary donations for its “#RezRanchLandBack effort.”

“The Tolowa Dee-ni’ Nation is actively seeking support, allies and comments to assist in the reclamation of this sacred land for the purposes of restoring the natural habitat and diverse ecosystems, resulting in the protection and perpetuation of natural and cultural resources,” a Feb. 23 news release states.

The ranch, located on Sarina Road in Smith River — along with 580 Holstein-Jersey cross cows, 100 dry cows — is on sale for about $12.95 million, according to the listing with California Outdoor Properties. Touted as a “sportsmen’s paradise,” the listing mentions the Roosevelt elk, deer, duck, geese and vibrant estuary ecosystem the ranch offers.

But the Coastal Commission’s enforcement department is still negotiating with the Westbrooks to resolve the violations, according to Public Information Officer Noaki Schwartz.

“Under the Coastal Act, liability attaches both to the person who did the unpermitted development and the owner of the land,” Schwartz told the Wild Rivers Outpost via email.

The Coastal Commission’s original Notice of Intent to Commence Cease and Desist Order and Restoration Order Proceedings, sent to Steven Westbrook on Sept. 1, 2017, stated that a September 2016 site visit uncovered the following developments conducted without a Coastal Development Permit:

“Staff advised you to not place anymore material in the cow dump, sloughs and construction waste pile and to not remove any of it until receiving further instruction,” the September 2017 letter states. “You were also informed that Commission staff is coordinating with the Water Board and other agencies regarding resolution of this matter.”

According to the letter, Coastal Commission staff were concerned with potential impacts to habitat for chinook salmon, steelhead, coastal cutthroat trout and the tidewater goby.

“Depending on the outcome of the Commission’s enforcement proceeding, the owner may be subject to significant civil liability and administrative penalties considering the quantity and severity of the apparent Coastal Act violations,” the StoryMap states. “The Commission may issue administrative penalties of up to $11,250 per day for a maximum of five years for each violation.”

According to the Tolowa Dee-ni’ Nation, Reservation Ranch was part of the original 40,000 acre Smith River Indian Reservation of 1862. After massacres in the Smith River Valley between 1850 and 1857, Tolowa were forced to live on a small island west of the current ranch called Tillas Island. Ancestors lived and were buried on the island for several years, according to the tribe’s StoryMap.

The Tolowa Dee-ni’ Nation hope to reclaim the land to restore its natural habitat.

“At minimum there is one significant cultural site, which is likely eligible for the National Register of Historic Places,” the tribe’s StoryMap states.

“Unfortunately, due to the privatization of land, this site has not yet been officially recorded or evaluated by the tribe or a professional archaeologist. This is an issue because the status of a site’s potential eligibility for the National Register of Historic Places affords it protection through laws like the California Environmental Quality Act and National Historic Preservation Act.”