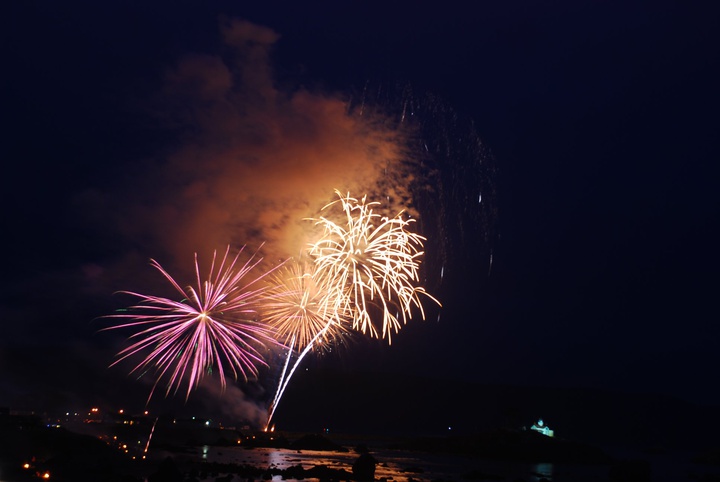 Independence Day always draws crowds to Crescent City and this year will be no exception.

Motels have been at “100 percent capacity since April,” Vosburg said. The chamber’s visitor center has seen more than 100 people every day for a few weeks — Vosburg said the numbers are greater than those in 2018 and 2019.

The chamber also welcomed its first tour bus, she said.

“What we don’t know is what the numbers would be if the delays at 101 was just a normal delay of a few minutes,” Vosburg told the Outpost.

Meanwhile, chamber volunteers and city staff are preparing for a plethora of holiday events that starts Thursday with the 42nd Annual Jed Smith Mountain Men Tall Trees Rendezvous in Smith River and ends at dusk Sunday with the fireworks display over Battery Point Lighthouse.

Events in between include a children’s fair, music festival and Live From Downtown: It’s First Friday! on Friday. Saturday events start with the Crescent City Farmers Market continues with the Yurok Craft Fair and ends with the Chamber’s annual Deck Party.

The Yurok Craft Fair will be held from 10 a.m.-2 p.m. Saturday at the Yurok Indian Housing Authority property near Walmart in Crescent City. 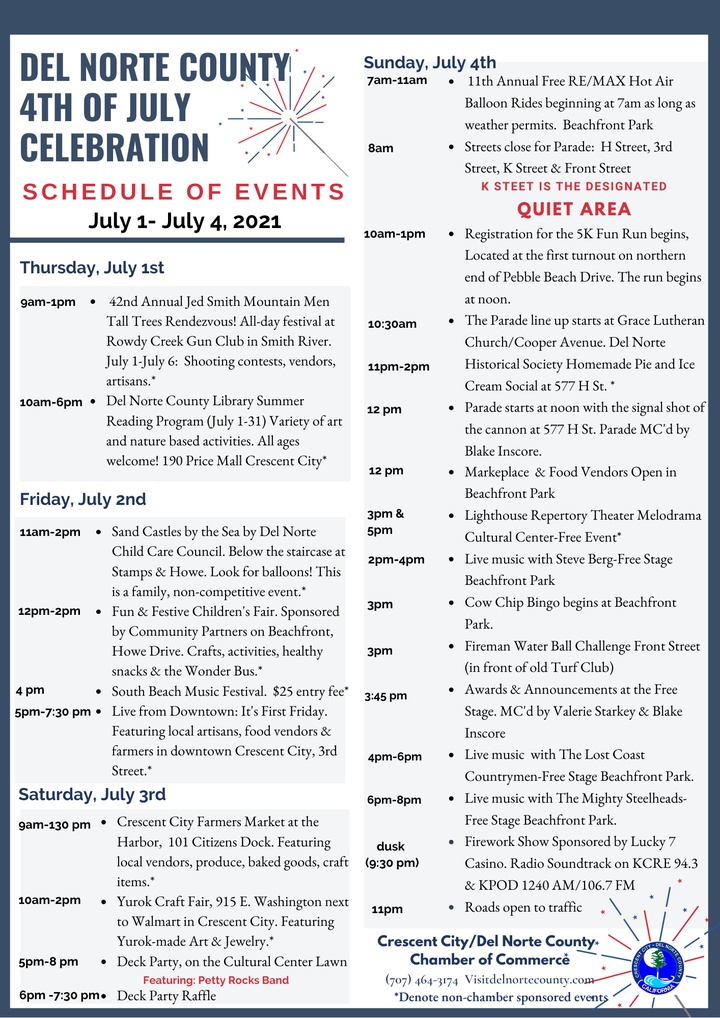 A comprehensive lineup of Chamber and non-Chamber-sponsored events this holiday weekend. Courtesy of the CC-DN Chamber of Commerce

The Chamber’s annual Deck Party will be held from 5 p.m.-8 p.m. on the Cultural Center lawn. Vosburg said she was excited about the party’s entertainment, the Petty Rocks Tribute Band.

“These guys are headliners,” she said.

The holiday weekend culminates with a parade through Downtown Crescent City at noon Sunday, a festival in Beachfront Park and the fireworks display.

“People can enter the parade — at this point it’s past deadline, but they can join at the end of the parade,” Vosburg said, adding that she expects roughly 80 entries. “We’re happy to have them join. If they have any questions they can text me or call me.”

The parade lineup begins at 10:30 p.m. at Grace Lutheran Church on Cooper Avenue. Vosburg said lineup for the parade and the parade itself is roughly two hours later because the Fourth of July is on a Sunday. This way, she said, churches can hold services in the morning without the parade lineup interfering with their activities.
Vosburg also pointed out that K Street is designated as a quiet zone for those with sensory sensitivities.

The festival in Beachfront Park also starts at noon and will g to 8 p.m. this year, Vosburg said. The entertainment lineup during the day includes local artists Steve Berg, the Lost Coast Countrymen and the Mighty Steelheads.

Though the festival ends just in time for the fireworks, Vosburg had a word of warning for those wanting to stake out a spot on the beach along Howe Drive to watch the display. With a high tide of 6.5 feet at 8:35 p.m., any items placed in the sand could be underwater, she said.

“There will be no sandy beaches to sit on to watch the 4th of July Independence Day Fireworks Display,” she said in an email. “It’s important to stay above the high water mark during this time or on the levee of Howe Drive.”

The commercial fireworks display starts at about 9:30 p.m. Sunday, said Crescent Fire Protection Chief Bill Gillespie. People can also shoot off safe and sane fireworks as long as they keep them away from vegetation and have an adult on hand to supervise things, he said.

“Then, too, when they get done their best bet will be to put them in a bucket of water, whether it’s stuff they shot off or stuff that maybe didn’t go off,” Gillespie told the Outpost. “Soak them in water for awhile, make sure they’re good and wet and they’re out before putting them in the trash. We have had fires in trash receptacles next to houses or in garages and we’ve also had bins down by the harbor that have caught on fire because fireworks were still smoldering but they appear to be out.”

Gillespie also reminded folks that fires on the public beach between Battery Point and Preston Island are prohibited. An urgency ordinance approved last week by the Crescent City Council also mandates that fires be kept 25 feet away from vegetation and be completely out before being abandoned.

“Use water to put the fire out,” Gillespie said. “Don’t bury it in the sand. Somebody else that comes walking along later can step into that sand that has gotten very hot and cause second and third degree burns. We want everybody to have fun and be safe.”