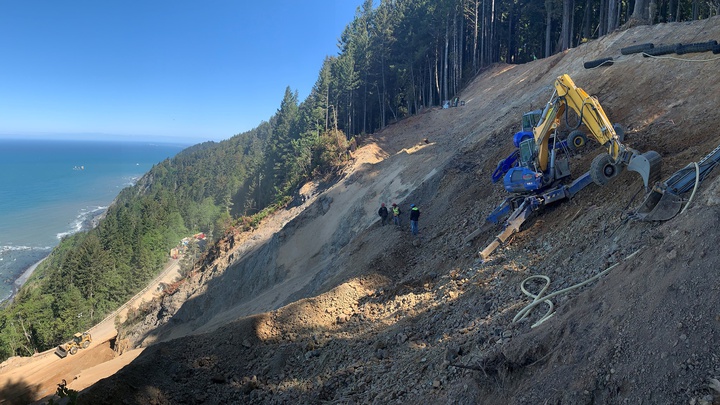 • KNOW BEFORE YOU GO: Last Chance Grade Between Humboldt and Del Norte to be Closed During Most Weekday Hours

Those staffers walked up and down the queues of cars on both sides of the slide on U.S. 101 handing out granola bars, water bottles and fliers with information about the ongoing emergency project as well as a list of local attractions.

The idea, Caltrans spokeswoman Cori Reed said, was to give motorists an alternative to sitting in their car for four hours waiting for the highway to reopen.

“We’re really trying to go above and beyond to give folks the information they need and give them the best trip possible,” Reed told transportation commissioners Tuesday. “The flier has also been translated into Spanish and we’re working on a Hmong translation flier.”

Reed and Tom Fitgerald, Caltrans District 1 deputy district director of maintenance and operations, spoke to the status of the emergency slide removal project roughly 10 miles south of Crescent City on the first day of a new schedule that has the road shut down for two four-hour periods Monday through Thursday.

The Del Norte Local Transportation Commission’s meeting also preceded a town hall scheduled for this evening meant to address residents’ concerns about the new schedules and how it impacts them, particularly those who live in the Klamath area. That town hall meeting will be held at 7 p.m. today via Zoom and will be streamed at the Klamath Community Hall for those who don’t have internet access.

In addition to the two four-hour closures Monday through Thursday — from 8 a.m.-noon and from 3 p.m.-7 p.m. — U.S. 101 will be closed from 8 a.m.-noon on Fridays. Motorists should anticipate 30-minute delays outside of those hours and during the weekend, according to Caltrans District 1. 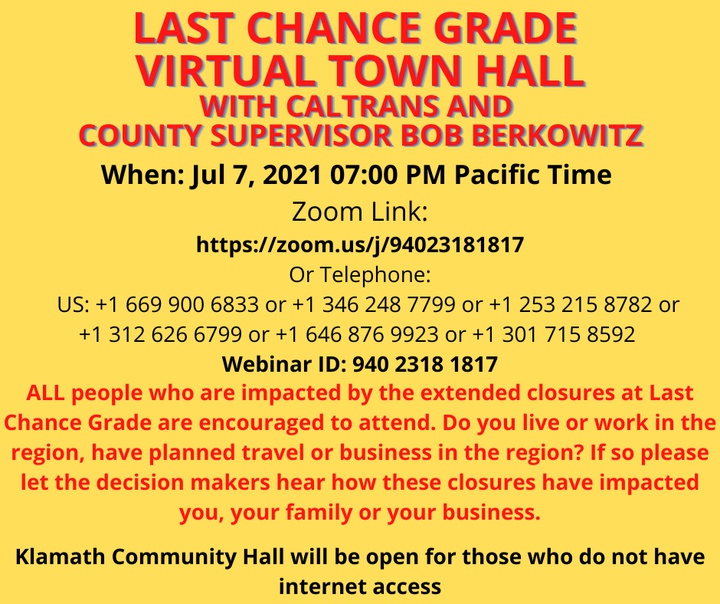 Under the previous schedule, crews could only work a “very minimal” three hours a day, Reed said. Now, they’re able to work up to seven hours a day. According to Reed, Cohen said he could already see a difference on the slope at Last Chance Grade.

“We do think the closure schedule is going to accelerate our time to get off the project,” Reed told transportation commissioners, adding that Caltrans officials are anticipating a tentative end date to the emergency project by Aug. 31 instead of the end of November.

Reed also addressed residents’ questions about work being conducted at night allowing for traffic to move through the area during the day.

“As work progresses down slope, night work could become more of a possibility,” she said. “Right now, the work is on the top of the slope, that’s not safe or feasible for night work.”

According to Del Norte Local Transportation Commission Executive Director Tamera Leighton, the fliers passed out to motorists stemmed from an idea she had in mid June. Concerned about the new construction schedule and wanting to ensure the public had the correct information, she said she suggested a partnership between Caltrans and the Crescent City-Del Norte County Chamber of Commerce.

Not only could that information get out to tourists and visitors to the area, Leighton said, but it could also be distributed to local businesses. Businesses could then push that information out to their clients, customers and other visitors coming through the area, she said.

On Tuesday, at Leighton’s request, commissioners approved allocating $6,650 in Regional Surface Transportation Program dollars to the Chamber of Commerce for the fliers they began disseminating Friday.

Those fliers include a list of businesses and attractions on both sides of the slide, such as the Skytrail at Trees of Mystery and Battery Point Lighthouse in Crescent City. On Friday, Chamber Executive Director Cindy Vosburg told the Wild Rivers Outpost that one difficulty travelers had with the previous schedule was not knowing when to get in line.

“The line is so long, (people) can’t get through it in just an hour, so by having it open for three hours, it gives everybody plenty of time and they can plan a trip accordingly that way,” Vosburg told the Outpost on Friday.

Despite project improvements, businesses are still facing challenges. On Tuesday, District 1 Supervisor Darrin Short, one of three county representatives on the Local Transportation Commission, said a local trucking company was losing between $30,000 and $40,000 as a result of the highway closures.

Short asked Reed if there would be a change to the current schedule to possibly have work done at night rather than during the day.

“You just mentioned a change in schedule that possibly could happen to night closures, which would be immensely helpful to these companies that are involved,” Short said. “Is there some sort of hope that you can give these companies?”

Reed said though Cohen anticipates being able to move to a nighttime work schedule, she couldn’t speak to a tentative date. She also told Short that she spoke with the trucking company he mentioned.

“We want to do night work and we want to end these closures,” Reed said. “One of the things Sebastian (Cohen) did say when he asked me to do this presentation, he said, ‘Please remind them that it’s not our choice. It’s out of necessity that we did this.’”

The ongoing emergency closures at Last Chance Grade stem from one slide that became active during a period of rainy weather in February. Though it’s within the limits of “what we call” Last Chance Grade, it’s not the “core problem,” Fitzgerald told commissioners.

There are more than 20 retaining walls at that three-mile stretch of road, Fitzgerald said. Caltrans crews are working to stabilize the current slide and preventing it from causing further uncontrolled and unforeseen closures.

“None of the current work is permanent,” he said. “Hopefully it does the job to keep that particular slide controlled through next winter. That’s our hope, but nothing on that alignment is permanent.”

As crews continue to shore up the hillside at Last Chance Grade, Caltrans is working on a more permanent solution, coming up with two potential alternatives to bypassing U.S. 101 around the slide.

One alternative carries an estimated cost of $1.3 billion and includes constructing a tunnel that’s more than a mile long, according to Project Manager Jaime Matteoli. The other keeps the road on its current alignment while focusing on landslide mitigation. Caltrans is currently conducting engineering and environmental studies on those two alternatives, Matteoli said.

“We do expect to take one year off the previous schedule we had shared (with) the environmental document completed in 2026,” he said. “We now expect to do that in 2025.”

According to Matteoli, Caltrans will hold a community town hall meeting in Del Norte County this fall to give people an update on the permanent fix at Last Chance Grade. Caltrans District 1 is also expected to update the California Transportation Commission on the project next month, according to Matteoli.