Supervisor Howard Takes Issue With California Bill That Would Allow Wildlife Conservation Board to Lease, Sell Public Lands to Tribes 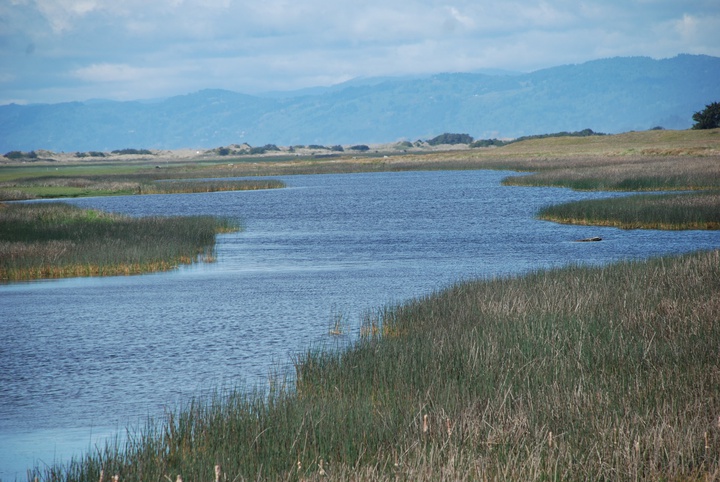 McLoughlin Pond is in the Lake Earl Wildlife Area, one of several public lands in Del Norte County managed by the California Department of Fish and Wildlife. Photo by Jessica Cejnar

(Updated at 11:21 a.m. to correct an error. Del Norte County supervisors in their letter to the State Senate will ask AB 379 include a stipulation to enter into a limited waiver of sovereign immunity to ensure the public still has access to conservation lands.)

Del Norte County supervisors are taking issue with proposed state legislation that would include Native American tribes in the process of acquiring public land that had been set aside for conservation.

Howard said he was concerned that a potential transfer of formerly public lands to a sovereign nation could take place with little or no input from the county government. He echoed concerns brought up during a Senate Natural Resources Committee on July 16 about the possibility that AB 379 would impact public access to conservation lands if it passes.

Howard also noted that AB 379 doesn’t mention payments in lieu of taxes, or PILT, which the county receives from the state when public lands are no longer subject to property taxes.

“Various administrations at the state level have chosen not to address PILT with Del Norte County, and we’re not alone, but we do still receive PILT here,” he said. “It’s been minor in some years and some years it’s been not at all, but I believe strongly there needs to be some mechanism for PILT payments to continue if some of these lands that are turned over are lands that we receive PILT payments for.”

The Del Norte County Board of Supervisors unanimously agreed to send a letter to the State Senate outlining its concerns.

Introduced in February by District 3 Assemblyman James Gallagher, AB 379 was amended in the California Senate on July 15. Howard said he anticipated the bill reaching the Senate Appropriations Committee by the Board of Supervisors’ Aug. 10 meeting.

Under existing law, the Wildlife Conservation Board through the California Department of Fish and Wildlife can lease or sell degraded potential wildlife habitat real property to private parties, nonprofits, local government agencies, state or federal agencies.

If it passes, AB 379 would add California Native American tribes to that list. This, Howard said, would enable tribes to place formerly public lands into trust without the need for a nonprofit agency to serve as a middleman.

Del Norte County is home to several conservation areas managed through California State Parks and the California Department of Fish and Wildlife. This includes the Lake Earl Wildlife Area, which had expanded through the work of the Smith River Alliance in 2008 to include land at nearby Pacific Shores, according to Howard.

Howard also mentioned a spruce forest near the Crescent City Marsh south of town that had once belonged to Hambro Forest Products and is now managed by CDFW. That land, he said, was transferred to public lands to offset habitat impacts from road projects conducted by Caltrans.

Sometimes when a local tribe acquires land that had been subject to property taxes, they come to the county looking for a memorandum of understanding or a letter of support they can bring to the U.S. Bureau of Indian Affairs, which would allow that transfer to occur, Howard said.

Other tribes move forward with the fee-to-trust process with no communication with the Board of Supervisors, Howard said.

“Once it gets to the BIA, there’s really no other alternative even though the county has a no-net loss policy that we’ve had in place for years,” he said. “Those lands are converted from fee to trust and those tax revenues are lost, yet we have a lot of services (that) we have to provide as for our constituents, which includes members of federally and California recognized tribes.”

Howard said he’d like AB 379 to be amended to include a requirement that tribes enter into a limited waiver of sovereign immunity if they acquire those lands to ensure that the public would still have access to those lands.

Howard noted that the county’s relationship with local tribes depends on the elected leaders for both parties. He used both the Tolowa Dee-ni’ Nation and Elk Valley Rancheria as examples.
With the Tolowa Dee-ni’ Nation, Howard said that though tribal staff has requested support from county supervisor for projects, the relationship has been strained and “we’re not entirely sure why.”

“We’re constantly reaching out to the executive director and staff and saying, ‘Let’s have a discussion,’” Howard said. “I don’t know how else to have a conversation other than asking for the conversation and when it falls on deaf ears, it’s difficult.”

However, Howard also mentioned a fee-to-trust process Elk Valley Rancheria went through to acquire Martin Ranch south of Crescent City where it’s currently building a new casino. According to Howard, Elk Valley worked with county supervisors to create a memorandum of understanding that would help offset the loss of property tax from that land moving into trust.

“It was the first of its kind document,” Howard said. “It allowed for this relationship-partnership we enjoy quite thoroughly with Elk Valley Rancheria and they’ve taken it beyond a partnership in a lot of respects here in Del Norte County.”

District 4 Supervisor Gerry Hemmingsen, who said he had conversations about the legislation through his involvement with the Rural Counties Representatives of California said he wanted to know what other rural counties thought about AB 379.

During public comment, Crescent City business owner Robert Derego asked Howard if members of the Tolowa Dee-ni’ Nation were invited to participate in the conversation.

Stating that Del Norte County has a “bounty record,” where people were paid to kill Native Americans in the past, Derego said he could understand why tribes might be reluctant to speak with county elected officials.

“I would like to know if the Tolowa were notified (that) this was going to be a conservation since Chris Howard represents and works for people who own thousands of acres that are in that region,” he said. “I’d like the community to be more inclusive — to all come to the same page together.”