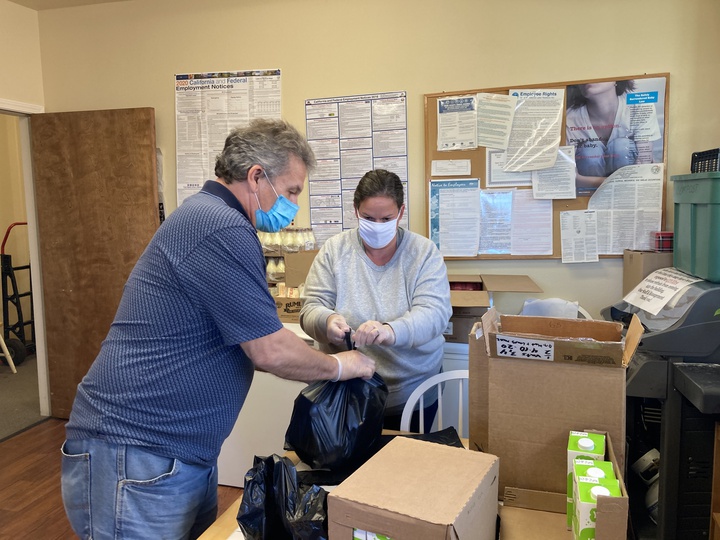 It’ll likely be spring before the Community Food Council can buy the van for its mobile food pantry, but the organization’s director says she wants to start building partnerships now.

Amanda Hixson, the council’s program director, said Monday she will hire a mobile market manager who will help plan routes and work with business owners and other partners to establish stops once the program gets its wheels. Her goal is to have those pieces in place so once the mobile pantry can get on the road once the van arrives in Del Norte County.

But the Community Food Council may not see those Community Development Block Grant dollars until the spring — June at the latest — Hixson said.

“Our first step is going to be ordering the mobile unit,” she said, adding that it will likely come from a Nova Scotia-based company called The Farmers’ Truck, which has served other California food pantries. “I envision that the manager of the program will be the main point person for determining and analyzing where throughout the county this mobile market will stop and how often and establishing relationships with partners as far as where the market can go.”

The Community Food Council and the Family Resource Center of the Redwoods opened Pacific Pantry in 2018 with CDBG dollars allocated to them from the city.

In August, the city and county decided to pool together additional CDBG monies allocated through the Coronavirus Aid, Relief and Economic Security Act so the Community Food Council could take its pantry to outlying areas.

According to Crescent City Finance Director Linda Leaver, the state Department of Housing and Community Development divvied up the CARES Act CDBG funding into three rounds. For the first round, the city received $67,634 and the county received $118,019. Those dollars must be spent within 12 months, according to Leaver.

“It would be for two years and it would use the city’s funding, which should be approximately $200,000,” Leaver told Councilors.

According to Leaver’s staff report, the city’s $200,000 CDBG allocation will allow the pantry to operate for an extra two years without any grant funding from the county. Del Norte County will look into other projects that may be eligible for the extra CDBG dollars, she said.

Though the second and third round of coronavirus CDBG dollars will enable the Community Food Council to expand its mobile food pantry, the money will need to be spent by September 2022, Hixson said.

The mobile food pantry was the brainchild of the new Del Norte Food Security Task Force. Hixson said she started the task force in late 2019 because she noted that many local organizations and agencies had the same goals, but weren’t working together.

Cobbling together enough interested people to take a collaborative approach to solving food insecurity was difficult at first, Hixson said. Then COVID-19 hit.

“It felt like an emergency,” she said. “Everyone realized we have to work together and do something and respond. The first meeting we had in March we had a really high (turnout) — maybe 30 participants on the call — and the momentum has been able to continue.”

The Food Security Task Force’s recent project was the Holiday Food Boxes, which was spearheaded by City Councilor Blake Inscore, pastor of the First Baptist Church in Crescent City.

The Food Security Task Force meets at 11 a.m. Thursdays, though Hixson said it’s not every Thursday. She said the next meeting will likely be in mid-January and will look back on the holidays as well as plan for 2021.

Meanwhile, Lanctot on Monday announced that Pacific Pantry raised $10,275 during December. The program needs about $15,000 to make it to March when it expects its CDBG allotment, she said. Lanctot added that they’ll reach their goal if they raise another $4,500.

Those who would like to donate to the pantry can send a check with Pacific Pantry in the memo to the Family Resource Center of the Redwoods at 494 Pacific Avenue, Crescent City, CA 95531. Donations can also be made to the Community Food Council’s Mighty Cause Campaign.