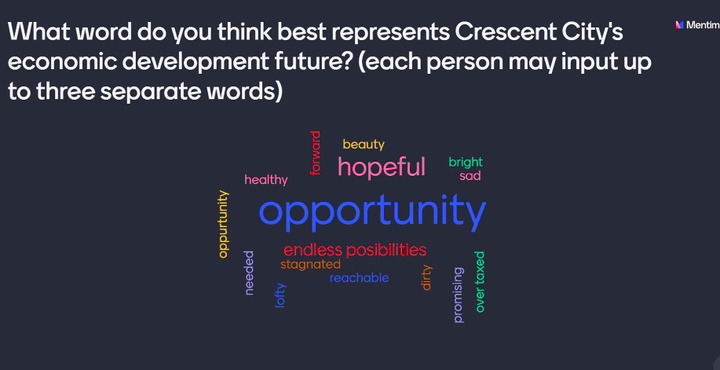 Crescent City is already preparing a handful of the 86 “recipes” identified in the “cookbook” that is its Economic Development Strategic Action Plan.

These include revamping Front Street and Beachfront Park, one of three areas residents said they’d like to see business growth to occur in. But at a workshop introducing the community to the plan Thursday, City Councilors said they hoped the plan wouldn’t sit in a binder on a shelf collecting dust.

Councilors encouraged city staff to explore partnerships with the Crescent City Harbor, College of the Redwoods, the Small Business Development Center and others to attract tourists and entice local youth to settle in the community. They also applauded a shop local campaign idea that came from Rob Holmlund, owner of Eureka-based Malex Consulting.

“We have an opportunity to get to work tonight,” said Councilor Blake Inscore. “We’ve got 86 recipes and some of these we’re going to have to take some time to look at. We can all agree right here tonight that a shop local campaign — get the recipe out, get the ingredients — let’s start tomorrow. That’s how we get stuff done.”

City Manager Eric Wier pointed to previous economic development strategies when he introduced Crescent City’s current endeavor. The most recent was HAS199.com — an acronym coined in about 2008 that stands for the harbor, airport, sewer plant, U.S. 199 and broadband.

The Crescent City Harbor has a new inner boat basin. The Del Norte County Airport is housed in a new terminal. The city’s new wastewater treatment plant is up and running. Crescent City has “Amazon-quality broadband,” Wier said.

U.S. 199 refers to the project to allow STAA trucks to navigate that road and is currently held up in litigation.

Wier said the new plan builds on partnerships the city cultivated with the Elk Valley Rancheria, the Tolowa Dee-ni’ Nation and local nonprofit organizations such as the Downtown Divas.

The plan is still under development. A live poll conducted during the workshop, asking questions about where the city’s economic priorities should lie as well as where they see the most growth occurring, will become survey people can take part in for the next 14 days, Holmlund said.

Thursday’s workshop was an introduction to the plan. It will be brought before the Crescent City Council several times, Wier said.

The city manager also listed three “good things” that are happening: Crescent City’s new website will be online Saturday. Another public meeting focusing on the Beachfront Park master plan will be held at 5:30 p.m. Feb. 2. And the city will cut the ribbon on a redeveloped Front Street at 4 p.m. Tuesday.

“If we say we want it, we can make it happen,” Wier said.

Beachfront Park and Front Street was one area residents named a priority for business development. The other two areas included the community’s southern gateway near the Crescent City Harbor and its downtown area, from Front to 9th streets.

An enterprise zone would urge investors to “come into town and see what we’re about,” Greenough said. Encouraging more residential development in the downtown area would also help grow business, he said.

“We have problems with traffic not going downtown and having people live down there will help with that,” Greenough said. “It’ll bring some income down there. It’ll bring more traffic. And I think it’ll help give our businesses more exposure to more people in the community.”

Participants in the workshop also indicated that opportunities for youth, particularly job opportunities were important. Holmlund suggested partnering with College of the Redwoods to conduct training programs may be an answer. Growing a manufacturing sector in the area may also be beneficial, he said.

Holmlund pointed to another priority indicated in the economic development strategic action plan to address unemployment and reduce poverty in the area.

“Retail is great, but typically it’s lower paying than manufacturing,” he said.

Councilors Beau Smith and Isaiah Wright as well as Mayor Pro Tem Alex Campbell pointed to keeping “our young folks” in Crescent City as an important tool in growing the community. But they came at it in different ways.

Wright said he moved to Crescent City as an adult and now as a City Councilor wants to make sure the area is enticing for not only local youth, but other area’s youth as a community to settle in.

Campbell, who said he grew up in Chico and “nobody grows up in Chico” said children need to experience life outside Del Norte County before they come back and “really prove what they want to do with this town.”

“I don’t think people grow up in Crescent City,” Campbell said. “They actually have to move away and have an experience of a larger view so they can come back and make the area a greater place to live.”