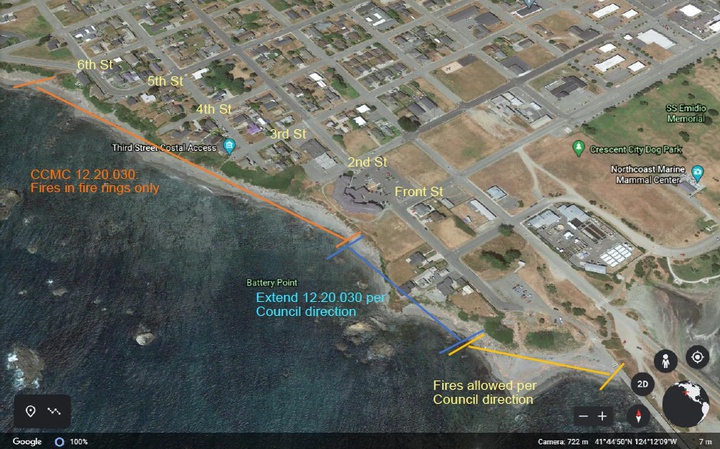 The new Crescent City Council will rekindle a discussion Tuesday whether beach fires should be banned between Battery Point and 6th Street.

Councilors will discuss updating a 40-year-old law that would explicitly ban fires on public property between 6th Street and the Battery Point Lighthouse parking lot. The updated ordinance would allow fires on private property, but with written consent from the owner.

The proposed updates would also contain size restrictions and would mandate that fires be at least 25 feet away from vegetation and buildings. They would also prohibit the burning of non-organic materials.

Leading up to that November meeting, city staff had polled homeowners in the residential area between Battery Point and 6th Street, who were split over whether fires should be prohibited.

In addition to asking residents if they supported a total ban on beach fires for both private and public property in the area, city staff asked if they would support an 11 p.m. curfew. The last question addressed previous complaints from residents about smoke drifting into open windows at night.

Like residents, the former Crescent City Council was unable to reach a consensus over a total ban of beach fires between Battery Point and 6th Street. Former mayor pro tem, Heidi Kime, and now-mayor Jason Greenough opposed the ban.

“Other than one who lives on the water side, I’ll be honest with you, I have not had a single person outside of this Council, specifically tell me they want beach fires in that area,” Inscore told his colleagues on Nov. 2.

The original ordinance, created in 1980, allowed beach fires in city-owned rings between 6th and Front streets, according to staff. Those fire rings don’t exist.

The Crescent City Council will meet at 6 p.m. Tuesday. People can participate via Zoom. Meetings are also livestreamed on YouTube.