« Felon Arrested for Possession of a Firearm, 3 Ounces of Heroin and $2,623 in Cash at Harbor's Beachfront Inn, Sheriff's Office Says

CHP Dug At Least 20 Motorists Out Of The Snow On GO, Red Mountain Roads During 101 Closure 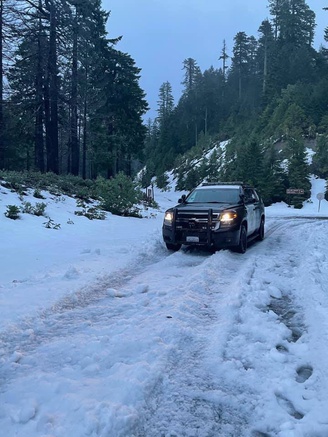 A California Highway Patrol car demonstrates how snowy it was up the GO Road last Friday. Photo courtesy of the CHP

After his officers dug at least 20 cars out from the snow on the Gasquet-Orleans and Red Mountain roads, California Highway Patrol Lt. Larry Depee is working with Google to help people find a better route around the landslide on U.S. 101.

Hundreds of motorists tried to get around the closure by taking the two forest service roads despite snow, locked gates and signs telling them the roads were closed, Depee told the Wild Rivers Outpost on Thursday.

“On the last day that I went up there, which was Sunday, I contacted a couple of people and one of them even admitted to moving the sign that said, ‘Road Closed.’” he said. “They didn’t think it applied to them.”

Depee said reached a representative of Google, supplied GPS coordinates and map links off Google Maps and is hoping the search engine will remove the two forest service roads as viable options for circumnavigating a road closure on U.S. 101.

Even without snow, the GO Road isn’t passable, Depee said. There are locked gates and it traverses private property, he said.

“When it’s raining and snowing, you’re just going to end up getting hurt,” he said. “One thing I asked Google was if they do close off the two sections of road at the beginning and exit, if any other mountain roads pop up to please let me know so I can get the GPS coordinates for those and get those closed as well.”

CHP will never detour motorists through mountainous roads, Depee said. U.S. 199 to I-5 to State Route 299 continues to be the best option for those wanting to get south.

A landslide comprised of soil and rock forced CHP and Caltrans to shut down U.S. 101 between milepost markers 13.3 and 23.85 off and on since Feb. 13. The road was shut down completely from Feb. 18 through Monday when it reopened to one-way traffic during the day with delays of about two hours for motorists.

On Wednesday, Caltrans announced that motorists could anticipate two-hour delays between 9 a.m. and 6 p.m. and 30-minute delays outside that timeframe. However that plan could change due to slide conditions.

When the slide first became active, on Feb. 14, Del Norte County Search and Rescue personnel were called help a motorist who had been stranded on Red Mountain Road overnight. Those volunteers had to abandon their own vehicle and hike about a half mile on foot to reach him.

The motorist kept warm using the heated seats in his car and was in good condition when volunteers reached him, but his vehicle was completely disabled.

SAR volunteers encountered other motorists on the way to that rescue and helped CHP get them to safety, prompting the Del Norte County Sheriff’s Office to issue a warning GPS isn't always helpful.

“Please do not choose alternate routes unless you are familiar with the terrain or have confirmed it is passable through other reliable sources,” the DNSO stated in a Feb. 14 Facebook post.

On Thursday, Depee said most of the people his officers countered were from out of the area. One was a Medford man trying to reach his girlfriend in Eureka, Depee said.

“He knew that 101 was closed and he found that route,” Depee said referring to the GO Road. “He thought he could get through and ended up being there at about midnight. We rescued him at about noon the next day. He was so deep in the snow and he got a flat tire.”

Depee said his officers didn’t cite any motorists, but wanted to make sure they got to safety. They even went so far as to jump into people’s cars and drive them out of the snow.

“We’re never going to detour people, citizens, through mountainous roads,” Depee said. “We ask that they stick to the main highways.”

“This is a very active slide,” he said. “I was personally on scene a couple of times. Rocks were coming down probably as big as cars, so I would just ask people to be patient.”