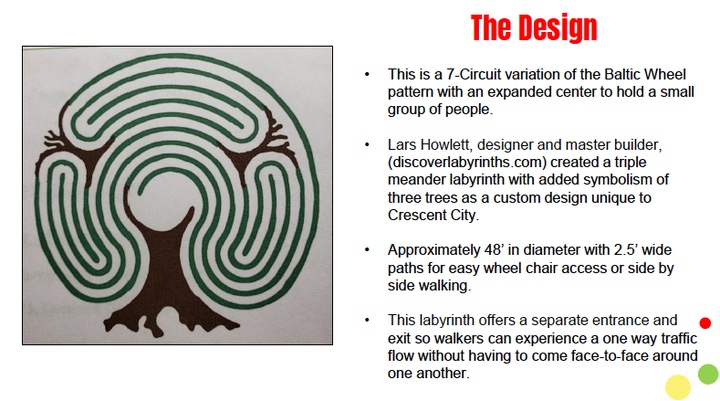 Renowned labyrinth builder Lars Howlett is expected to construct a seven-circuit variation of the Baltic Wheel for Crescent City, according to Denise Doyle-Schnacker.

Before she passed the oversized check over to Crescent City Manager Jason Greenough, Denise Doyle-Schnacker said the $7,617.91 represented years of effort dating back to the first Beachfront Park Masterplan introduced to the community in 2012.

The vision she and other members of the Beachfront Park Labyrinth Project group share is for a labyrinth created by world-renowned designer Lars Howlett to become one of the future amenities at the park.

“Our design is a seven-circuit variation of the Baltic Wheel,” Doyle-Schnacker told Councilors on Monday. “It is unique to us — he has never designed anything like this. Most of his are very structured. We wanted the tree and there’s significance for native folks here locally, we wanted to include that as well.”

According to Doyle-Schnacker, she and others have been raising money for about six years for the labyrinth. Just before the COVID-19 pandemic took hold about a year and a half ago, fundraising activities included a concert where they planned to raise an additional $9,000-10,000.

Fundraising is expected to continue when things open up a little more, Doyle-Schnacker said. However, if the labyrinth isn’t constructed by 2031, members of the Beachfront Park Labyrinth Project group want their dollars to go toward continued improvement at the park.

“Specifically to support indigenous youth and veterans and accessing the park,” she said. “We do have a few folks who have agreed to match when you send out the request to build. When you get to that point these folks are willing to match whatever funds we have raised already.”

According to the city’s staff report, Howlett’s labyrinth design for Crescent City requires an area approximately 50 foot in diameter and would be constructed out of concrete and crushed granite. The 2019 construction estimate ranges from $50,000-$100,000, but costs have likely doubled since then, according to the staff report.

According to City Manager Eric Wier, in addition to a $5 million Proposition 68 grant the city is set to receive, those per capita dollars would be used to develop a site plan on the east side of Beachfront Park. The “Paths of Culture” will tell the story of Crescent City’s original inhabitants as well as its history of mining, logging and fishing.

The labyrinth and a monument celebrating Crescent City’s sister city relationship with Rikuzentakata, Japan, could also be part of that “Paths of Culture” area, Wier said.

“We want to enhance this cultural interpretive pathway, as we get further into the design of the actual project and we know what that’s going to look like and what funding we can do to enhance those types of projects,” he said.

According to Wier, the design phase for the Paths of Culture project will take place in 2022 with the first round of construction taking place in 2023. Those dollars must be spent by March 31, 2024, he said.