Redistricting Process: With Adoption of Draft Map 1, Supervisors Stick As Closely to Status Quo As Possible 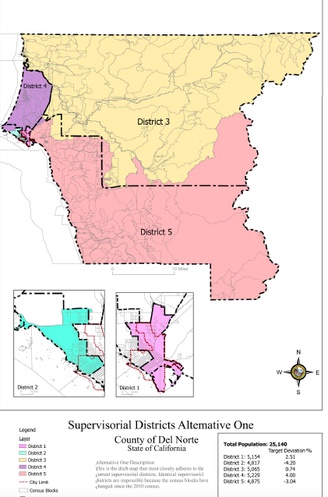 “I’ve said it from the get-go, I’m very much in favor of Map 1,” District 2 Supervisor Valerie Starkey told her colleagues on Tuesday. “Map 1 is the least disruptive. It stays quite within the current parameters and the districts we currently have.”

The Board of Supervisors’ decision wraps up a process that began in March and included the formation of an advisory commission. During several public meetings, the commission whittled their options down to four draft maps published in October using 2020 U.S. Census data, according to Deputy County Counsel Autumn Luna.

Redistricting is required under the U.S. Constitution’s Equal Protection Claus and redraws supervisor district lines using demographic data from the 2020 Census to ensure each is equally represented.

County supervisors go through the redistricting process every 10 years, though Del Norte County’s maps weren’t re-drawn following the 2010 Census, according to Luna.

The four maps were presented to the Board of Supervisors in November. County supervisors had until Dec. 15 to adopt a final map, according to Luna.

Of the four maps, the first most closely adheres to current district boundaries. However, it places Point St. George and the Del Norte County Airport within Del Norte County District 4 rather than its current placement in District 2.

Portions of Crescent City would still be included in Districts 1 and 2.

Other Draft Maps placed Crescent City and the Crescent City Harbor into District 1 instead of its current placement in District 5. Another draft map redrew District 3 boundaries so it encompassed Klamath, Gasquet and Hiouchi and parts of Smith River to the Oregon border.

At a special meeting Nov. 24, five members of the public urged supervisors to adopt Draft Area Map 1 saying it was the best of four options.