« Redistricting Process: With Adoption of Draft Map 1, Supervisors Stick As Closely to Status Quo As Possible 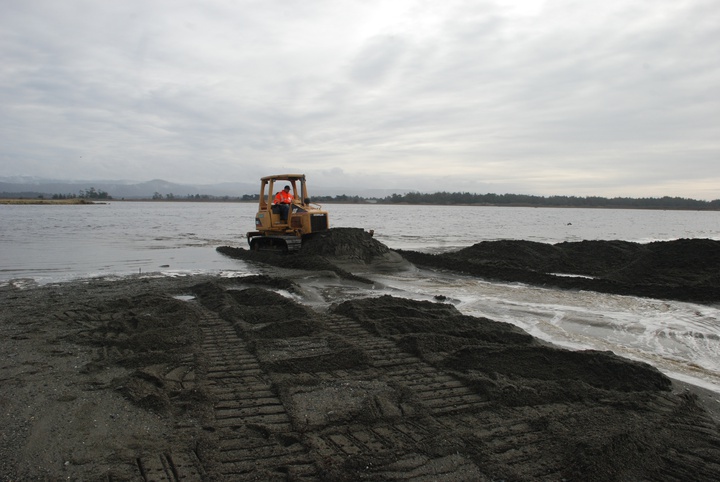 Tristan Smith, an employee with the Del Norte County Roads Division, uses a Caterpillar to dig a channel between Lake Tolowa and the ocean in this 2020 photo. File photo: Jessica C. Andrews

With water levels in the lagoon hovering at 8.5 feet at about 11:30 a.m. Tuesday, Del Norte County supervisors allowed its Community Development Department to apply for a permit to breach lakes Earl and Tolowa.

The department’s director, Heidi Kunstal, said she’ll wait until the water exceeds 9 feet and there is localized flooding to submit an application for an emergency permit to the California Coastal Commission and the U.S. Army Corps of Engineers.

Kunstal said she would set a date for breaching the lagoon when her department files the emergency permit.

“We’re about half a foot shy of getting to the point when I believe the agency will issue us an emergency permit,” she said. “They want there to be localized flooding.”

There may currently be flooding in the Pacific Shores subdivision on the north side of the lagoon, but Kunstal said she hasn’t heard from Roads Division representatives whether that flooding has reached Kellogg or Lower Lake roads.

The Board of Supervisors on Tuesday. unanimously approved an urgency resolution to breach the lagoon.

There was enough precipitation over the summer, so the lagoon already had a lot of water in it when the rains started in October.
Historically, Kunstal said, the county has breached the lake as early as October.

“It all really depends on once you breach it, how soon it closes and where you are precipitation-wise in the season,” she said.

Lakes Earl and Tolowa make up the largest coastal lagoon on the West Coast. It’s bordered by salt and freshwater marshes as well as an extensive network of sand dunes.