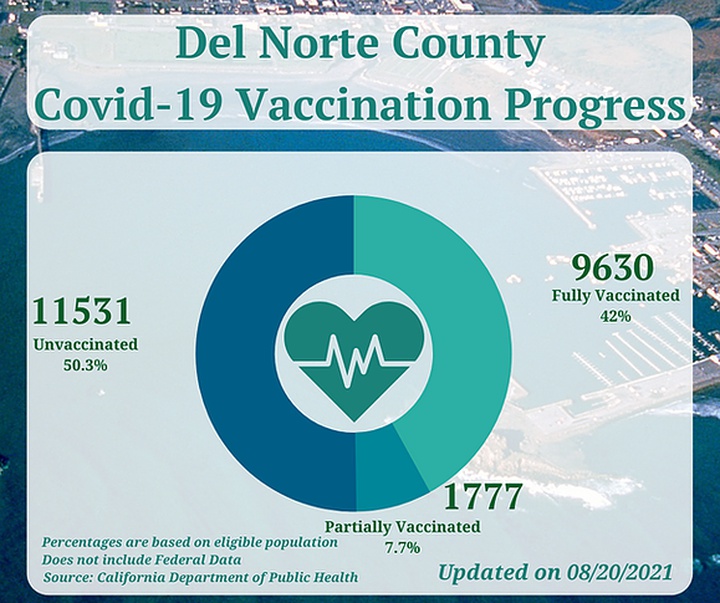 This graphic shows the percentage of Del Norte County residents who have been vaccinated. Courtesy of the Public Health Branch

At least 20 new COVID-19 cases were reported to local health authorities by the time Del Norte County’s new public health officer made his first report to supervisors at about 10:30 a.m. Tuesday.

Coming off a weekend spent at Sutter Coast Hospital, Dr. Aaron Stutz said 22 out of its 38 admitted patients have been hospitalized with COVID-19 as of Tuesday morning.

Nine are in the intensive care unit. Seven have been intubated and are on ventilators. Six more are in the emergency department awaiting admission, he said.

“About 61 percent of our COVID-related admissions are under age 65,” Stutz told supervisors. “We also had our first hospitalized pediatric patient last week. That patient was flown out to a pediatric facility in the Bay Area and is in critical condition.”

Eighteen people have died of COVID symptoms in Del Norte County as of Tuesday, according to the Del Norte Public Health Branch.

Meanwhile, Stutz said he received notification from the California Office of Emergency Services that Wier’s Mortuary is nearing capacity due to the influx in deaths both from COVID and for other reasons.

“The mortuary manager in town had mentioned that if it continues, if cases continue this way, they will soon be at capacity,” Stutz told supervisors. “They’re having to make arrangements for that to prevent that from happening.”

No new cases were reported among the county's incarcerated population. Forty-nine Pelican Bay State Prison inmates are positive for COVID-19, according to the California Department of Corrections and Rehabilitation's Population COVID-19 Tracking web page.

Earlier that morning, Stutz, a board-certified emergency physician, gave supervisors a glimpse of what the weekend was like in Sutter Coast’s emergency department. According to him, on Saturday, the department had three beds available to patients. On Monday, only one was available, he said.

People are unable to be seen for issues outside of COVID and those being tested for the novel coronavirus are having to wait in the parking lot for their results, Stutz said.

The hospital has also erected two tents, one to house inpatient tents if needed, he said, and a smaller one near the emergency department for its patients. There is currently no one in those tents, Stutz said Tuesday.

State workers are also administering monoclonal antibody therapy for those who have a confirmed case of COVID-19 and are eligible for the treatment, Stutz said.

“Its efficacy is controversial in the medical (community) so it’s hard to tell people whether or not they should seek out this therapy,” he said. “It does prevent severe COVID or hospitalization, but we also don’t want to promote therapy in place of getting the vaccine. The vaccine is a much more effective preventative. This is something if you already have COVID and have significant medical problems on top of it.”

Stutz urged people to get the vaccine, noting that the U.S. Food and Drug Administration approved the Pfizer COVID-19 vaccine. Stutz said he anticipates the Moderna and Johnson and Johnson vaccines receiving FDA approval soon as well.

“I get to see all the people who come into the emergency department sick with COVID and wishing they had gotten the vaccine,” he said. “That happened several times this weekend.”

Though its staff are putting in more hours, the Sutter Coast Hospital cafeteria isn’t open to staff or visitors currently, District 2 Supervisor Valerie Starkey said during her board report Tuesday.

As a result, Starkey, said she met with hospital representatives Ellie Popadic and Danielle Preston, sent text messages to her friend and organized salads, drinks and snacks from Frank’s Heating and Refrigeration and sandwiches from Hiouchi Hamlet over the weekend.

Starkey said she also received a call from Gina Zottola from the Wild Rivers Community Foundation which has committed $30,000 toward meals for hospital staff.