The board of commsioners discuss events in April of 2020 that eventually led to Dumire's resignation last month.

Curry County Emergency Services Manager Jeremy Dumire submitted a letter of resignation last month that cited a toxic work environment within the Board of Commissioners Office.

The letter — obtained by the Outpost through a public records request — specifically states that Dumire felt harassed by Commissioner Court Boice while serving as emergency services manager during the pandemic.

“This past year has been extremely difficult to endure,” Dumire’s resignation letter states. “The fact is, on multiple occasions I have contemplated my resignation from Curry County due to its toxic work environment. Between Commissioner Boice publishing threats in attempts to tarnish my name, openly harassing me and shaming me publicly, I should have quit.” 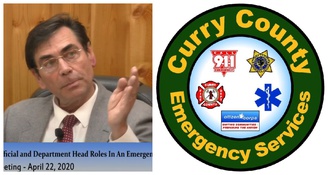 Boice, who responded to the Outpost’s request for comment regarding the letter, vehemently denied Dumire’s allegations.

“I am completely innocent of any ‘published threats’ to tarnish the name of Jeremy Dumire nor did I ‘shame’ or ‘harass’ him,” Boice said. ”There has been zero public, private, or workplace interactions between Mr. Dumire and I from March 19, 2020 to the present.”

Issues between Dumire and Boice seem to stem from a department management meeting held prior to March 19, 2020 during the early stages of the pandemic — approximately one year after Dumire’s position was transferred from a sheriff’s office position to a position within the Board of Commissioners Office.

“He was highly insubordinate to me with 13 other people in the room,” Boice said. “During that meeting, Mr. Dumire’s very negative reactions were shocking — as witnessed by all in attendance. [Dumire’s reaction] apparently stemmed from my elected public official responsibility to set the best possible Covid-19 pandemic responses during those early days and I did so in conjunction with other county, state and federal representatives. Mr. Dumire apparently did not agree with those collective policies.”

Dumire isn’t the only county official to express frustrations with Boice in the last year. At a special meeting held on April 22, 2020, Commissioner Chris Paasch publicly discussed some of the behind-the-scenes drama involving a number of unelected county employees that felt that Boice was overstepping his bounds as commissioner by consistently telling them how they should be doing their jobs.

Several witnesses spoke at that meeting about the verbal argument between Boice and Dumire at the department management meeting. Paasch and Boice also went back and forth about two additional arguments between Boice and unnamed county employees that spilled out in county office hallways — one of which had to be broken up by Sheriff John Ward.

“Related to [the argument with] Mr. Dumire, to this day, I don’t know what I did wrong,” Boice said during the meeting. “I need the public to know, I have had some objections with some decisions he’s made — right or wrong. Eventually I was able to voice those to him but I was not given the respect and the connection to be able to even talk to him, and being too busy to talk to a commissioner, not to answer emails, is not an excuse with the responsibility and the load that we’re all carrying. So, yes, that brings tension, unnecessarily, in my view.”

Although the emergency services manager position was transferred back under the umbrella of the sheriff’s office in December of 2020, the move apparently wasn’t enough to keep Dumire from resigning.

Curry County Sheriff Ward presented the resignation letter to commissioners during a meeting on March 3, letting them know that Dumire’s issue was not with management inside the sheriff’s office.

“I had hoped it would improve and stuck it out knowing that the department was transferring back under your office,” Dumire’s resignation letter to Sheriff Ward reads. “This has been a difficult decision for me to make. I will forever be grateful to the opportunity that you provided me in 2017 to serve the people of Curry County as Emergency Manager. However, the right thing for me and the department is to recognize that I need to step away. The events of this past year have made it impossible for me to execute this position to its fullest.”

While Dumire felt negatively enough about his working relationship with Chair Boice to resign, Boice told the Outpost that he holds no resentment against Dumire and added that he might still be with the county if he wasn’t “badly influenced by an incompetent county administrator.”

“I have absolutely nothing against Mr. Dumire,” Boice said. “In fact, when I get around middle-aged men, I often find myself treating them like sons as many good people kindly showed me that mentorship during my younger years. Sadly that didn’t work with him. I believe [he] simply got caught up in the unelected-bureaucratic syndrome [that is] unfortunately very prevalent in our county.” 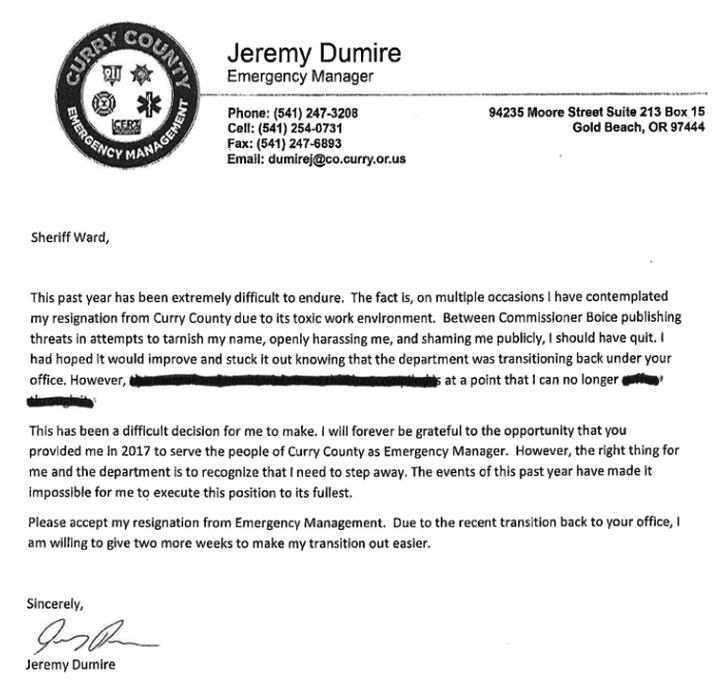