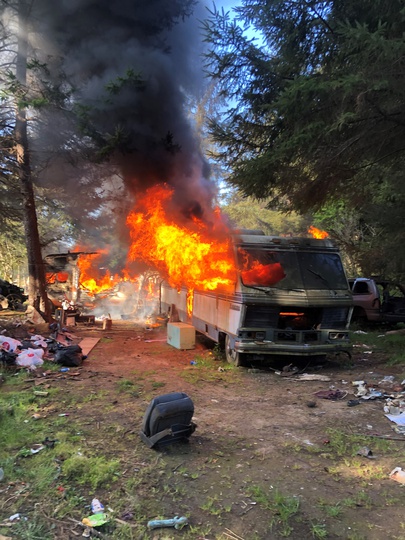 Photos of the scene provided by Crescent City Fire and Rescue.

A fire broke out at 9:08 a.m. Monday morning on the 100 block of Dakota Street in Crescent City.

Responding units arrived to find heavy fire burning in a motorhome used as a residence. Fire had also spread to another larger motorhome parked near the first.

The occupants of the first motorhome were outside and told firefighters that there wasn’t anybody else left in either unit. Firefighters got an engine as close as they could because of a muddy and rutted dirt road, then stretched hose lines the rest of the way to the motorhomes to attack the fire. Due to the volume of fire present, firefighters attacked the fire from the exterior.

Crescent City Fire and Rescue responded to the scene with two engines, a water tender, a rescue unit and duty officer. CALFIRE responded with an engine which was used for initial attack as it was able to access closest to the fire scene.

The 13 firefighters on scene had the fire knocked down within 20 minutes and spent an additional hour putting out hotspots in the destroyed motorhomes.

Red Cross was requested and responded to the scene to assist the two displaced occupants with temporary housing.

The two motorhomes were a total loss and the fire severely scorched two spruce trees on scene. Fire spread was held to these units.

Fire loss and damage was estimated at $10,000. Based on occupant statements, the fire appears accidental, possibly caused by a dropped cigarette in the first motorhome. There were no fire-related injuries reported to occupants or bystanders, or to the 13 firefighters who fought the fire.

Crescent City Fire and Rescue reminds residents to make sure you have working smoke alarms in your home.

Photos of the scene provided by Crescent City Fire and Rescue. 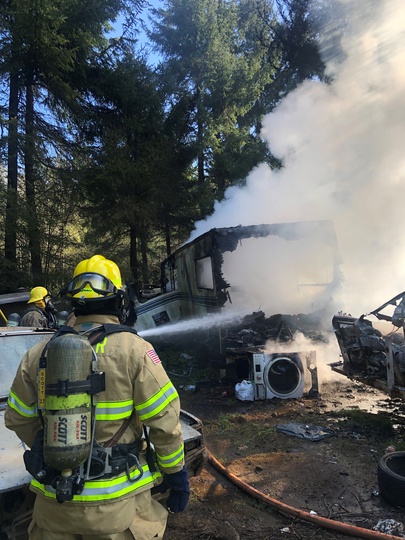