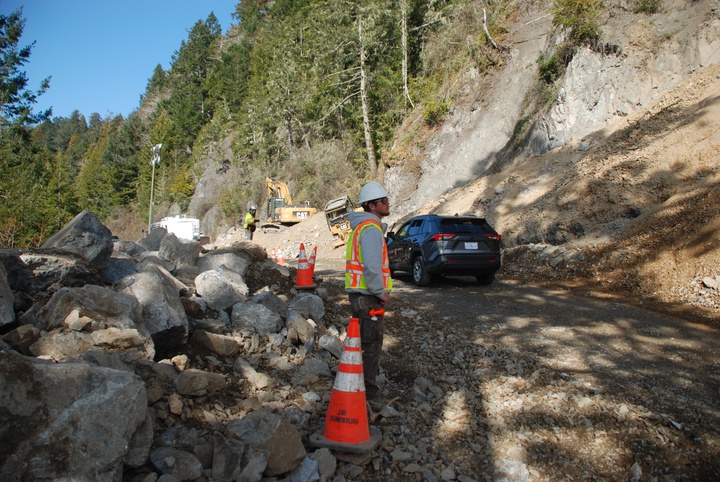 A member of the crew working on U.S. 101 at Last Chance Grade allows traffic to go through the slide zone in this March photo. Photo: Jessica Cejnar

Del Norte County supervisors weren’t impressed with the two permanent fixes proposed for the Last Chance Grade project, saying that one is extremely expensive and the other is unacceptable.

“None of the choices we had that we got rid of were good,” District 4 Supervisor Gerry Hemmingsen said Tuesday. “And I’m not sure these two are good either, but they’re probably the best we’re going to come up with.”

The two alternatives — Alternatives F and X — include rerouting U.S. 101 through an inland tunnel that avoids the landslide roughly 10 miles south of Crescent City, State Sen. Mike McGuire’s office announced last week. The second option, Alternative X, leaves the highway where it is and coming up with a way to permanently shore up the slopes and hillside in the area, according to McGuire’s office.

Alternative F involves an inland tunnel that’s just over a mile long with the entire bypass being roughly 1.5 miles long, according to the Last Chance Grade project website.

Caltrans is currently exploring the feasibility of both option sand expects to have a draft environmental report in 2022, according to Goetz. State and federal officials say the two options will save $10 million and shave a year off the project timeline.

The first option, involving the tunnel, is one of the more expensive of the six original alternatives Caltrans was considering for the Last Chance Grade project, according to District 5 Supervisor Bob Berkowitz. He doubted that would be acceptable to those funding the project.

“The other one, of course, is just trying to extend the current right-of-way of Last Chance Grade,” he said. “That’s probably going to be the one they’re going to choose because it’s the least expensive so I’m really concerned about where this thing is heading.”

Board Chairman Chris Howard, who on Friday told the Wild Rivers Outpost that the second option was unacceptable, said Tuesday the first is estimated to cost between $1.3 billion and $1.7 billion.

“The entire state transportation budget is around $5 billion,” he said. “So this is extremely politically sensitive.”

On Tuesday, Howard noted that Del Norte County’s state and federal representatives haven’t said no to the first alternative.

“I think as a board, our coursework’s pretty much outlined for us to waste no time in advocating for this at the national level,” he said. “We need federal assistance and our federal highway partners digging deep when the environmental work starts wrapping up.”

Motorists can anticipate two-hour delays from 9 a.m.-11 a.m., noon-2 p.m., and 3 p.m.-5 p.m. Monday through Thursdays and two-hour delays from 9 a.m.-11 a.m. and noon-2 p.m. on Friday as crews continue to shore up the most recent slide activity at Last Chance Grade. Travelers can expect 30 minute delays outside those hours and on weekends, according to a Caltrans District 1 Facebook post.