DNUSD Enrollment Down 260 From Last Year; Space May Be A Challenge For Parents Waiting Until In-Person Classes Resume Next Month » 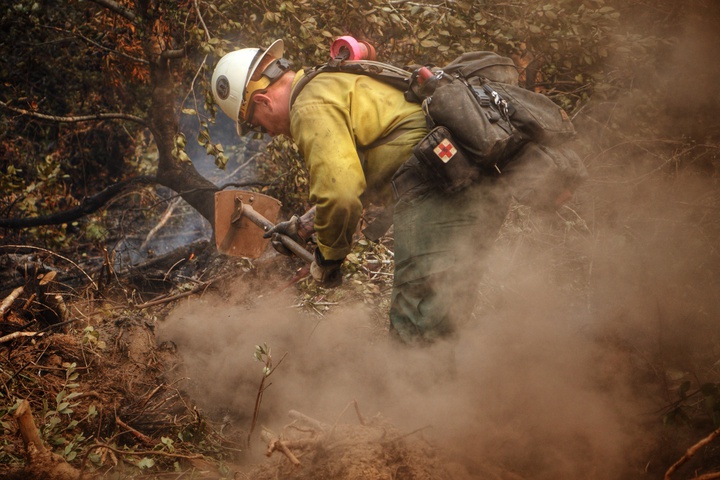 A firefighter from Galice Wildland Fire Module secures containment line near the Almost Heaven Resort off U.S. 199 on Sept. 14. Photo courtesy of InciWeb

Spot fires near Monkey Ridge Road in Del Norte County kept crews tackling the Slater Fire busy, though they were able to continue preparing the area for a prescribed burn to clear unburned fuel.

Aided by recent rain, fire behavior died down on Thursday with many areas only showing “a few smokes,” according to a Friday morning update from the Northern Rockies National Incident Management Team.

Fire crews will focus on mopping up, improving existing containment lines and constructing new ones along the east and west flanks of the blaze. Crews are giving fuels an extra day to dry out before commencing prescribed burn operations, according to the update.

Meanwhile, evacuation orders for the area between Pioneer Road and the Oregon state line in Del Norte County remain at Level 2 “Get Set.” The communities of Big Flat and Gasquet are still at Level 1 “Be Ready” evacuation orders.

In the Knopki Creek area to Sanger Lake, crews are building containment lines and will use prescribed burning to remove flammable material, according to the Northern Rockies National Incident Management Team update.

Mop up continues in Happy Camp, with crews building containment line north of Thompson Creek. Firefighters will conduct burnout operations to remove unburnt fuel between the indirect containment lines and main portion of the wildfire.

A weak cold front is expected to keep temperatures cool and bring a small amount of rain to the fire area on Friday, according to the update. The short-term forecast calls for light winds with gusts of up to 25 mph on ridgetops.

On Saturday, a high pressure ridge will build, bringing warmer temperatures and decreased humidity to the region that's expected to last throughout the week. Record high temperatures are possible for Tuesday, according to the update.

Three people were injured due to the fire and two people died, according to the Northern Rockies National Incident Management Team update. A total of 438 structures, including 197 homes, were lost.

A total of 1,138 personnel are battling the fires with an estimated cost of $20.8 million, according to the update.