Bracing For $1 Million To Be Withheld To Next Fiscal Year, County Office of Ed Starts Loan Shopping » 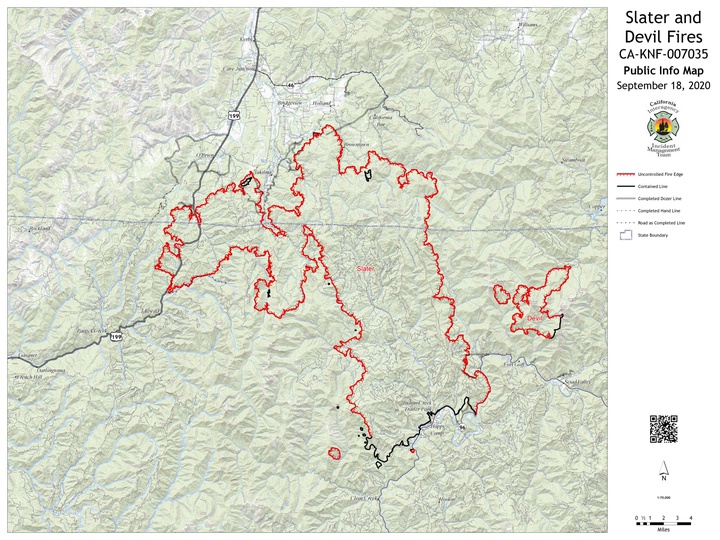 Latest map of the Slater and Devil fires.

Crews working the Slater Fire are trying to halt its encroachment further west of U.S. 199 and the road continues to be blocked on both sides to allow for firefighter and public safety.

The Slater Fire has grown to an estimated 146,698 acres and is 10 percent contained as of Friday morning, according to an update on the Del Norte Office of Emergency Services Facebook page. The Devil Fire is 7,144 acres and 7 percent contained.

A community meeting will be held at 5 p.m. today at the Gasquet Ranger Station, 10600 U.S. 199. This will give residents a chance to meet incident management team members and other fire officials.

The fire grew about 3,000 acres on Thursday, mostly in its northern section, Granger said.

On Thursday, crews focused on structure protection between the Knopki Creek area and Gasquet, according to DNOES. Work includes completing dozer line from Monkey Ridge to U.S. 199.

“Our hopes are to get 199 open as quickly as possible,” Granger said Friday.

North of the state line, crews are trying to stop the blaze from moving into Bureau of Land Management lands in the Takilma area, Granger said. This includes adding 100 acres of “burn out” on Thursday and adding more containment lines to ensure Takilma is safe.

The Gasquet Ranger District’s Smith River Hotshots are working along Oregon State Route 46, which leads to Oregon Caves National Monument and Preserve, Granger said. That’s an area with active fire and crews are putting in control lines and dozer lines to protect “high value” structures inside the monument, he said.

The northern edge of the Slater Fire has retreated to roughly 2.2 miles southwest of the park’s boundary and 3.2 miles southwest of the monument’s national historic district as of about 5 p.m. Thursday. Outdoor sprinkler systems are still trained on the Oregon Caves Chateau and Chalet to guard against embers and other fire threats, according to a monument Facebook post.

Access to the national monument is closed due to the Slater Fire. For current information, call the Illinois Valley Visitor Center at (541) 592-4076 from 8 a.m.-6 p.m. through Saturday.

The Slater Fire started in the Happy Camp area on Sept. 8. On Sept. 9 Gasquet residents were evacuated.

Evacuation orders have been reduced, though Gasquet and Big Flat residents remain at Level 1 “Be Ready,” according to DNOES. Residents between Pioneer Road and the Oregon state line are at Level 2 “Be Set” evacuation orders.

Hiouchi residents are no longer under evacuation warnings, according to DNOES. For more fire information in Del Norte County, call (707) 464-0911 from 8 a.m.-6 p.m.