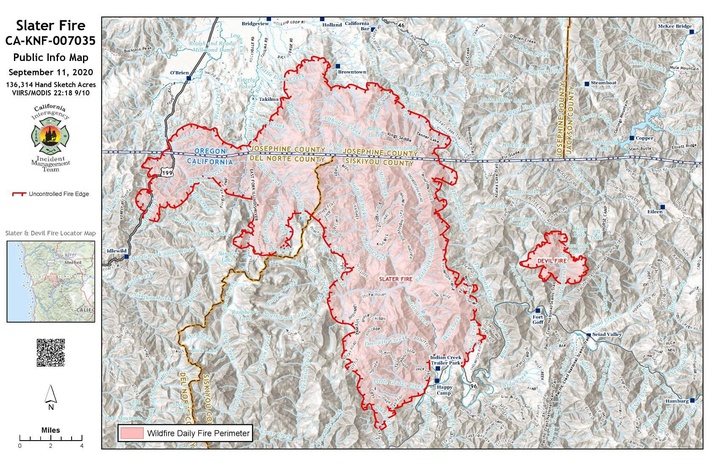 Smoke from wildfires in the area are contributing to 'very unhealthy' air quality conditions in Del Norte County, according to the North Coast Air Quality Management District.

In a news release Saturday, the NCAQMD reported that the forecast is expected to remain in effect until Sunday. The air quality management districts will provide updates as conditions change.

Meanwhile, fire crews continue battling the Slater Fire in parts of Del Norte County primarily along U.S. 199 between Gasquet and the Collier Tunnel, according to a Saturday morning update on InciWeb. The blaze is still burning in the Oregon Mountain Road and Knopki Creek areas, according to the update.

The Gasquet Ranger District's Smith River Hot Shots have been assigned to the fire.

On the south end of the Slater Fire, favorable weather conditions slowed fire activity significantly yesterday and overnight. However, the initially hot and fast-moving fire weakened trees in the burn area. Falling snags along Highway 96, some of them very large, pose a risk to firefighters and anyone else nearby.

Firing operations will begin today along the Slater Fire’s eastern edge to protect structures in the Thompson Creek area, while scouts look for opportunities to contain and control fire spread down river where the fire is approaching Highway 96. Firefighters are working to assess and implement structure protection in the Highway 96 corridor, and to protect road access on the highway.

Further up the eastern flank of the Slater Fire, crews continued to make good progress constructing fireline between the town of Seiad and the Devil Fire, which is likely to soon merge with the Slater Fire burning to its west. Fire managers have also continued scouting to determine where best to hold the fire to prevent it from threatening communities and structures to the north, east, and west.

Meanwhile, on the north side of the Slater Fire, crews and equipment continue to make headway along the west side of Highway 199, with hopes of buttoning up both sides of that highway with fireline and turn the northwest corner of the fire to connect with containment efforts along the fire’s northern edge. The Wild Rivers Ranger District (Rogue River-Siskiyou National Forest) currently has 150 local firefighters assigned to the Slater Fire that are working along the Highway 199 corridor.

Meanwhile, aircraft are standing by to assist in firefighting and intelligence gathering if the air clears enough. Smoky conditions have dampened fire activity over the past few days, but also hampered the use of aircraft due to poor visibility.

Moisture recovery rose overnight and is expected to go up even more today, with probability of ignition dropping to 40 to 50 percent for today. A low-pressure system from the coast could scour smoke out of the fire area starting tomorrow, but could also result in increased wind speeds. Relative humidity is expected to continue climbing, aiding fire managers in suppression efforts. With higher fuel moistures and light variable winds, the fire is anticipated to be more terrain driven tomorrow. Winds out of the east have caused smoke impacts from the Slater and Devil Fires that have extended over to the coast. Smoke continues to impact most of the west coast due to multiple large fires.