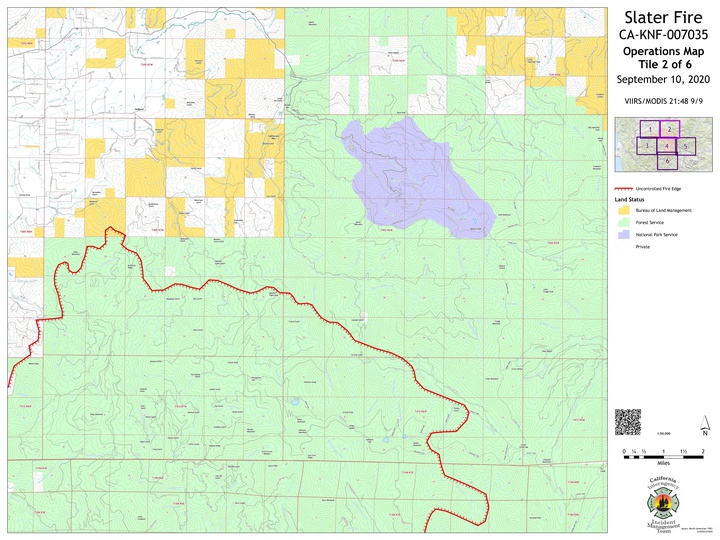 Map of the Slater Fire in proximity to Oregon Caves National Monument. Image courtesy of InciWeb

Officials have closed access to Oregon Caves National Monument and Preserve due to the Slater Fire.

The wildfire, which started near Happy Camp on Tuesday, is 140,802 acres as of Friday morning, according to InciWeb. The nearby Devil Fire in Seiad Valley is at 4,488 acres.

Both are 0 percent contained. A crew of 240 personnel are engaged in structure protection and are building containment lines where possible, according to InciWeb.

The Slater Fire's northern edge is about 2.25 miles southwest of the Oregon Caves National Monument and Preserve boundaries, according to a National Park Service news release Thursday:

All access to Oregon Caves National Monument and Preserve is closed due to severe wildfires in the surrounding area. Dry, hot, windy conditions are causing fires to spread rapidly. The Illinois Valley Visitor Center in Cave Junction, Oregon, is tracking the most current information available about the Slater Fire near the park and Cave Junction. We cannot staff phone lines at the park but can be contacted between 8:00 AM to 6:00 PM at the Illinois Valley Visitor Center: 541-592-4076.

Weather conditions are predicted to downgrade from extreme fire danger to moderate to high danger in the coming days.

Park staff living in the monument and preserve were evacuated Sept. 9 and relocated safely to Selma, Oregon. Thank you to the Siskiyou Field Institute for graciously providing shelter and facilities on short notice for NPS staff during the emergency. We are grateful.