Hike & Bike A Car-Free Newton B. Drury Through Prairie Creek This Weekend » 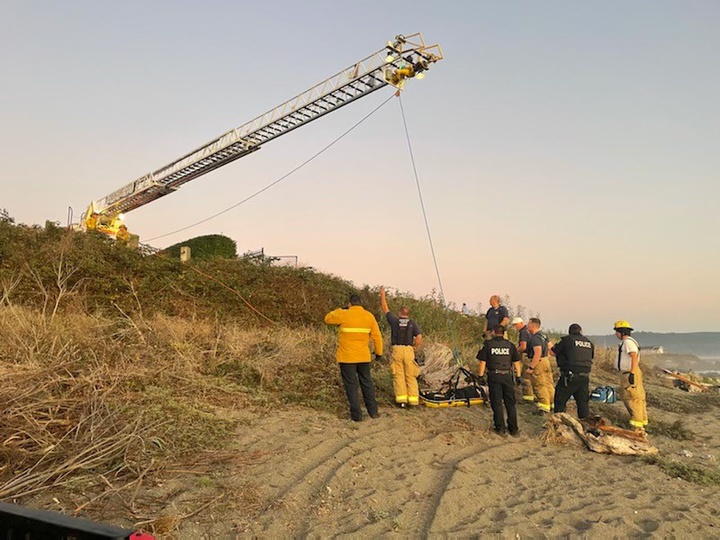 Photos of the rescue provided by Crescent City Fire and Rescue.

While responding dispatch advised that bystanders were trying to keep the teen’s head above water. An officer From Crescent City Police Department was first on scene and located the victim at the far west end of a reef off the end of 4th Street.

The officer was able to keep the victim’s head above water while additional fire and ambulance responders accessed the reef location. The victim had fallen from a rock from a height of approximately 20 to 30 feet into the rock debris below and sustained major injuries.

After removing the victim from the water and securing him to a rescue board, multiple rescuers transported the victim across the reef through a tangle of large rocks to the edge of the sand. The victim on the board was placed onto an all-terrain utility vehicle from the police department and transported across the beach to a location below the end of 4th Street. The victim was then placed into a rescue basket and vertical lifted by ladder truck from the beach to the roadway level where the patient was transferred to Del Norte Ambulance and transported to Sutter Coast Hospital in serious condition.

“The four agencies involved worked very well together in the challenging rescue effort to get the victim from the ocean, across rough terrain to the roadway where the victim could be transported to the hospital” said Fire Chief Bill Gillespie. During the course of this rescue, Crescent City Fire and Rescue also responded to two additional calls for service.

The all-terrain side-by-side utility vehicle is brand new to Crescent City Police Department. It was purchased with funding from the 2019 Homeland Security Grant Program from CAL-OES and administered through Del Norte County Office of Emergency Services. This was the first use of the vehicle in a response capability.

“The ATV just paid for itself in its first response. This is one of many uses that show the capability of the new unit,” said Police Chief Richard Griffin.

Crescent City Fire and Rescue would like to remind residents and visitors to be careful around the rocks and reefs found along our coast. They are often slick, and slips and falls can occur quickly, sometimes leading to very serious injuries or death. Their often-remote locations lead to challenging rescues. 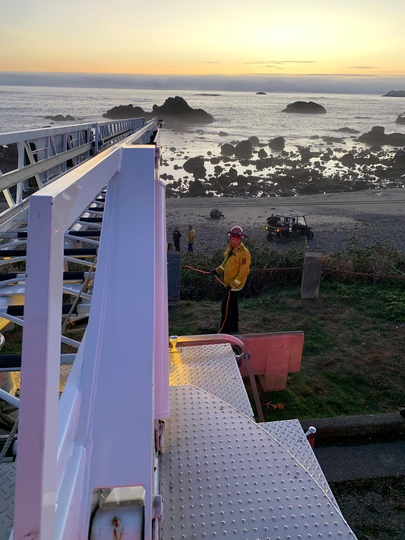