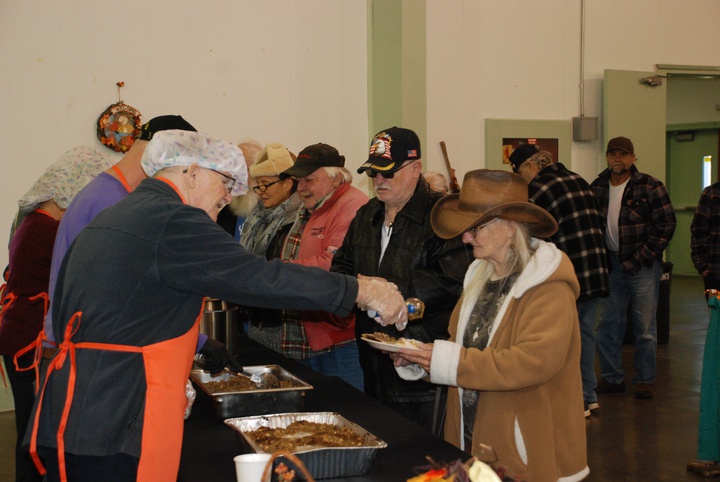 The COVID-19 pandemic that has robbed Del Norte of an Independence Day celebration and a county fair can claim another casualty — the annual Community Thanksgiving Dinner.

Held for the last 28 years at the Del Norte County Fairgrounds, the volunteer-led endeavor serves more than 600 plates of turkey, stuffing and pumpkin pie to anyone who shows up.

But because of restrictions limiting social gatherings due to the novel coronavirus, organizers Crescent City Foursquare Church and Sutter Coast Hospital have canceled the event, Pastor Roger Bodenstab told the Wild Rivers Outpost on Wednesday.

“We feel like we can’t move forward with that,” Bodenstab said. “We let the fairgrounds know the last week in October.”

This doesn’t mean local organizations aren’t trying to make the holidays brighter for those in need. Though it’s not putting together a Thanksgiving dinner, Pacific Pantry will have the components for a traditional meal, including turkeys, for its clients this week, said Andrea Lanctot, community food program coordinator for the Community Food Council for Del Norte and Adjacent Tribal Lands.

“It’s not in time for Thanksgiving, but it’s before the Christmas holiday right as kids are getting out of school for winter break,” she said. “The way we’re doing this is all the different organizations that are part of this task force are going to determine how many families and patrons they serve that need one of those boxes. We'll compile all of them and each organization will get boxes out to those who need them.”

According to Crescent City Mayor Blake Inscore, who is also lead pastor at First Baptist Church, the task force set a goal of composing 500 total food boxes on Thursday. One challenge, he said, will be to determine how to get the word out to those who aren’t regular clients of Pacific Pantry or the food bank at Rural Human Services.

There’s also the actual endeavor of coming up with an alternative to the Thanksgiving Dinner without compromising safety, Inscore said. Even assembling the boxes can be risky.

“We’ve kind of nixed some of the ideas, actually,” he said. “We talked about doing a to-go type of thing where people are putting it together in boxes and either doing a drive through (or) delivering meals. We decided today that with everything going on, with the surge in cases, the idea of bringing groups together to assemble boxes or cook is probably not wise right now.”

Another challenge is being able to meet the needs of many who come to the Thanksgiving Dinner because that’s one of their few options for a hot meal, Inscore said. He noted that for some who are homeless, giving them a box with canned goods isn’t practical.

According to Hixson, boxes will include items that are either ready to eat or need minimal preparation.

“Those boxes will go out to those that need it and the other boxes will be for people that do have the ability to do some cooking in a kitchen,” she said.

There will also be those who want to help. Hixson said newly-elected District 2 Supervisor Valerie Starkey may head up a fundraising campaign, though those plans haven’t been hammered out yet.

Inscore pointed out that for many, the Thanksgiving Dinner is an opportunity for them to volunteer by cooking or serving others. But with COVID-19, he said he’s apprehensive about bringing people together.

“The biggest thing is, are there people out there who normally would be hands-on, could then, if we said a food box is the value of $20, could they do that and then try to funnel the money through the (Family Resource Center)?” Inscore said, noting that hasn’t been determined yet. “People just want to know how they can best help is to give $20, then let’s tell them that.”

Due to a recent surge in local COVID-19 cases, Del Norte County’s Public Health Officer, Dr. Warren Rehwaldt urged those who can to shelter in place and said people should consider modifying or canceling Thanksgiving gatherings.

As of Tuesday, there were 38 active COVID-19 cases in Del Norte County, according to the Public Health Branch’s COVID-19 Information Hub

On Thursday, with the coronavirus death toll reaching 250,000 nationally, the U.S. Centers for Disease Control and Prevention recommended against traveling and gathering for the holiday.