It Looks Barren Now, But Ecologists Say Landscape Around Slater Fire Will Bounce Back Quickly 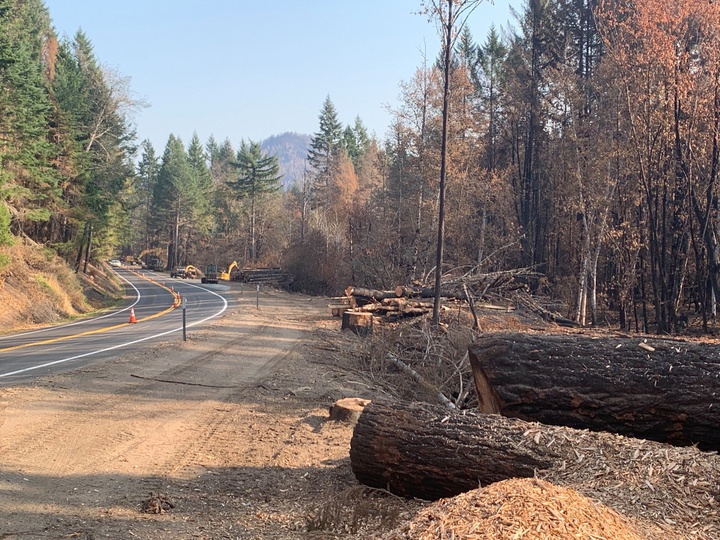 Crews remove hazardous trees in the Slater Fire scar near Collier Tunnel on U.S. 199 in this Oct. 6 photo from Caltrans.

Motorists passing through the Slater Fire scar on U.S. 199 may look upon a barren landscape now, but a little rain will soon change that.

Ramona Butz, province ecologist for the National Forest Service says though the area is ugly and scary looking, vegetation — particularly the region’s hardwoods and understory species — will come back really well on their own.

“By early spring you’ll see oak species re-sprouting,” she told the Wild Rivers Outpost. “Some species really need fire to be healthy and regenerate. A lot of tree species have a pretty good seed bank in the soil and with the fire, it kind of cleans everything off and gives a lot more light into the understory. So you do get a lot of pretty rapid regeneration.”

Butz specializes in fire and vegetation ecology studying the role fire plays in various ecosystems and how they adapt. This includes determining how ecosystems have changed due to the fire suppression and other management activities, she said.

According to Butz, understanding the role fire has in these ecosystems help forest managers determine what areas recover first and whether humans need to lend a hand to help that process along. Though her work has largely been focused on the Red Salmon and August Complex fires south of Del Norte County this year, Butz said she’s familiar with the landscape around where the Slater Fire started on Sept. 8.

“This whole landscape here has evolved with fire over time,” she said. “Historically, a lot of these ecosystems have had a lot more fire on a more regular basis than what we’ve seen in the last 100 years.”

The Slater Fire grew to 157,229 acres, spreading to Del Norte County and Josephine County in Oregon, sparking evacuation orders in Gasquet and shutting down U.S. 199. at Pioneer Road. Local emergency officials, inspecting the area two days after the highway was shut down described spot fires on both sides of the road to Collier Tunnel and the agricultural inspection station on the north side.

“There are all kinds of potential for trees to come down into the highway,” Bill Steven, public information officer for the Del Norte Office of Emergency Services, told the Outpost on Sept. 11. “One long guardrail is down on the ground and the air quality is just horrible.”

As construction crews clean up, ecologists inspect the area to determine how severe the soil and vegetation burned. According to Butz, this helps determine the potential for erosion and landslides, including whether culverts need to be cleared so water can flow freely. For the Slater Fire, she said, there weren’t “huge areas of concern.”

In these areas, though the fire burned on the ground, the duff and litter isn’t completely burned. There is still soil cover. Though fuels are reduced, soil erosion and post-fire flooding problems are minimal, Litten said.

Roughly 42 percent of the Slater Fire burn area sustained moderate soil burn severity. This involves more burning of mid-story and over-story vegetation as well as more loss of duff and litter. Trees are burned, but charred needles may remain and provide soil cover when they fall, Litten said.

“The soil was not heated so much, a network of roots still holds the soil together and water is able to infiltrate the soil,” Litten said. “A patchwork of forest and trees remains.”

“The forest is essentially gone except for burned trees,” Litten said.
Depending on the amount of precipitation and whether it is rain or snow, flood risk increases in high and moderate soil burn severity areas, Litten said.

“Where a 2-year storm would produce a light runoff, now a 2-year storm produces more and faster runoff that makes a 5-year flood,” she said. “It depends on how much of a watershed is burned and at what severity.”

Butz is one of the ecologists who conducts soil and vegetation burn severity assessments following a wildfire. This includes determining flame lengths by looking at whether the fire burned off conifer needles or if trees have lost lower branches or sustained burn marks. Many trees that do sustain damage often survive, she said.

“I have models I can run using that soil data and vegetation burn severity data to look at the probability of recovery of certain tree species,” Butz said. “It takes into account burn severities but also (the) size of the fire and distance to the nearest unburned trees and nearest seed source so we can get an idea of where we expect that recovery to happen and how long that might take.”

The Slater Fire area is especially interesting, Butz says, because of its serpentine soils, which house the carnivorous Darlingtonia californica, which are also adapted to fire.

Butz also notes that reintroducing fire to the landscape can prevent more destructive blazes. Communities in the region have begun to recognize the value of prescribed burning, she said, and are more proactive about encouraging homeowners to maintain a defensible space around their structures.

“Most of these systems we want to have more fire in them on a more regular basis,” she said. “If we can return them to what would have been a more historical, pre-European type fire regime, they’re far more able to withstand, and quickly recover from, subsequent fires.”