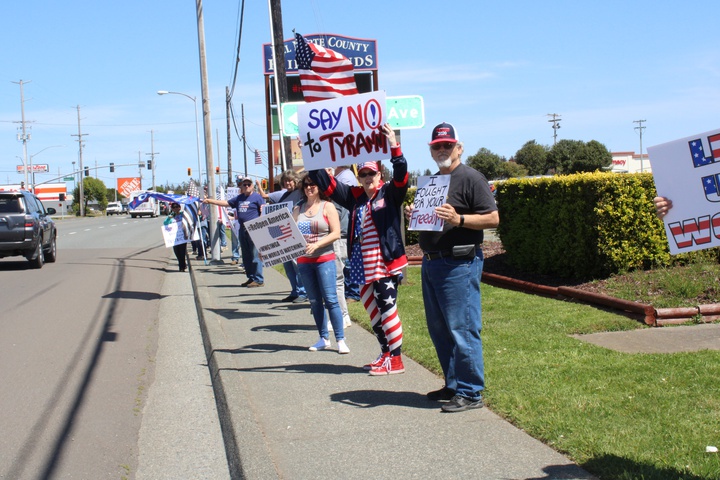 Protesters lined U.S. 101 a second time demanding the lifting of safety mandates in place due to COVID-19. Photo: Jessica Cejnar

As Del Norte’s public health, emergency and business communities move toward reopening, between 75 and 100 protesters pushed back against stay-at-home mandates in place to limit the spread of COVID-19.

The protesters lined U.S. 101 near the Del Norte County Fairgrounds at noon Thursday, waving American flags, brandishing Trump 2020 signs and others proclaiming “We have a Constitution,” “Liberate California,” and “Say no to tyranny.”

Parents and grandparents brought their children, many lamenting the possibility that a traditional graduation may not be in the cards this year due to the COVID-19 pandemic. Most, though not all, eschewed face coverings and masks. Their efforts drew horn blasts from passing semis and logging trucks.

Mary Wilson’s husband, former sheriff Dean Wilson, organized Thursday’s rally — Del Norte’s second — saying it was important for local leaders to realize their constituents wanted action. Even though the protest comes as California’s transitioning into the second of a four-phase roadmap for modifying the state’s March 19 stay-at-home order.

Stage 2 allows for gradually reopening retail, manufacturing and logistics business, though retailers can only offer curbside service. Later in this phase, retailers may be able to relax their restrictions and schools, childcare facilities, offices, hospitality and personal services may be able to resume restricted operations.

Some communities may be able to move through this second phase faster if their public health officers can show they meet a readiness criteria. Included in this criteria is the ability is testing capacity, the ability to contain the virus and the ability of the local hospital to accommodate a potential surge.

When asked about the purpose of the local protest in light with the movement to reopen Del Norte businesses, Wilson said a one-size fits-all approach doesn’t work for rural communities in California.

The number of positive COVID-19 cases is small in some, like Del Norte, and non-existent in others, he said, using Modoc, as an example.

Though Newsom’s roadmap to reopening California allows for regional variations, Wilson said the criteria most small rural counties have to meet is difficult. 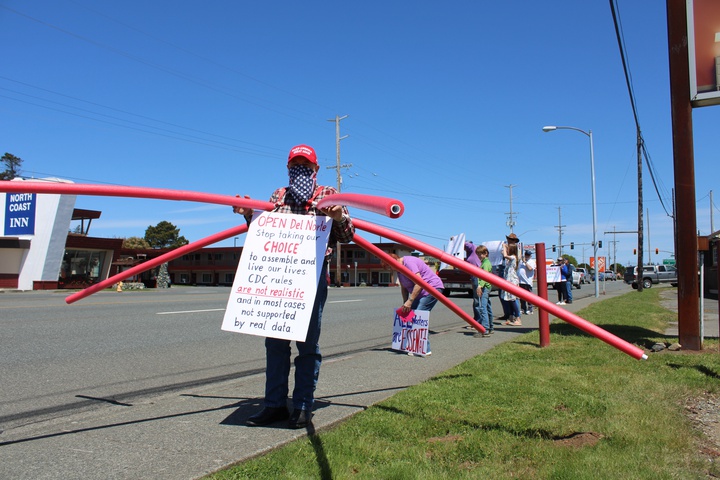 A protester used pool noodles to social distance from others at a rally on Thursday. Photo: Jessica Cejnar

“We don’t have the type of facilities or the type of response,” he said. “Our little county here, right now, you can get tested for COVID, but it takes two or three days to get the results back.”

Wilson said if he was governor, he would ensure systems that allow for instantaneous testing be handed out to every small community, enabling healthcare workers and those who work at convalescent hospitals and senior centers to find out if they’re positive.

“Right now we don’t have that capacity in this community,” he said. “Most communities like ours don’t have it.”

Though Wilson said Del Norte County is not a “high risk community,” risk will guide local leaders in determining how soon businesses can begin to relax social distancing requirements. At a virtual town hall meeting Monday, Del Norte Public Health Officer Dr. Warren Rehwaldt said the most high risk environments include large gatherings of people in an enclosed space, such as a church.

Businesses requiring close person-to-person contact, such as barberships, are also high risk, Rehwaldt said. He advocated for mixing the reopening of high risk businesses with low-risk environments such as retailers or those requiring outdoor work.

“If we put them all in a group, especially at the beginning, that’s the sure recipe we’re going to have a problem (with) in terms of management,” Rehwaldt said. “We know when we open up we’ll get more cases. We don’t want to get so many cases all at once.”

According to Scott, some businesses, primarily retail, will be able to reopen on Friday. The Emergency Operations Centers’ Economic Resiliency Group is working with local businesses to help them meet state guidelines, Scott said.

Though the California Department of Public Health will allow for a regional approach to reopening, Scott said for Del Norte’s to be approved, it has to do “more than the baseline.”

“The million dollar question right now (is) they haven’t told us what that more is,” she said. “We don’t have all the details on what criteria they want us to meet yet.”

Each has its own set of regulations and guidelines, said Holly Wendt, team lead for the Economic Resiliency Task Force. Participants in those webinars have used those webinars as opportunities to trade ideas on best practices within their field as well as air their concerns, she said. Those concerns include questions about what actions to take if an employee comes down with COVID-19.

“We just want everyone to be prepared,” Wendt said. “We will be getting Dr. Rehwaldt a list of businesses in each sector so he understands when things reopen what that does mean. How will opening of that sector of business impact our ability to provide healthcare should we get a surge? There are so many things on the public health side.”

At a webinar focused on restaurant owners Thursday afternoon, Wendt and Rob Holmlund, one of two consultants hired to work with local businesses, guided them through a “Best Practices Manual” for operating during COVID-19. The document included links to information from the White House, the U.S. Centers for Disease Control and Prevention, the Food and Drug Administration, the Occupational Safety and Health Administration and CDPH.

Holmlund also provided restauranteurs with customizable templates for everything from “please-wear-a-mask” signs to cleaning logs.

Next week, the task force will gather input from organizations that work in congregations and groups, lodging facilities and rentals, gyms and recreation facilities and professional services such as real estate offices and accountants. People can register for the webinars by visiting the Economic Resiliency Task Force’s Facebook page, Wendt said.

Ocean World is a tourist venue that’s been closed since the March 19 stay-at-home order was issued. Wilson, whose family owns the small aquarium, said they have maintained their staff who care for the sea lions and other animals at the attraction.

They have applied for, and received, relief dollars through the Small Business Administration’s Paycheck Protection Program. But, Wilson said, it doesn’t replace the money they lost by being closed this spring.

“About a third of our annual income is made at this period of time,” he said. “We’re fortunate not to be a restaurant left with a freezer full of food.”

As he looks toward reopening Ocean World, Wilson said safety modifications may include reducing the size of their tours. Normally, guides take 25 people at a time through the aquarium. Wilson said he and his wife may limit the size to about 10.

Restaurants may have to operate at half capacity, Wilson said, requiring their employees to wear masks when serving the public.
Wilson said sanitation is also something he will have to consider. He said he’d have UV lights installed at various locations throughout the aquarium.

Sherry Scott said she made sure everything was sanitized at the restaurant she owns, the Log Cabin Diner in Klamath. Scott and her partner, Ed Salsedo, opened the dining room at their restaurant, flouting state, local and Yurok Tribal safety mandates.

Scott, who told the Outpost on Monday she wanted to “take a stand,” closed their dining room after the tribe and county served them with cease and desist orders.

“We made our statement,” she said. “We got served with our warning letters to stop doing it, so we did. It said, ‘No dine-in service allowed,’ so we put tables outside and so it’s takeout. They can take it outside and take it to a table and sit down.”

Scott said she’s hoping with the move to reopen local businesses, restaurants can resume dine-in services with safety measures like mask-wearing in place.

In Del Norte County, three residents who tested positive for COVID-19 have recovered, according to the Public Health Branch. Local health providers have administered 420 tests as of 5:08 p.m. Thursday. There have been negative results for 402 tests, while the results for 15 are still pending, according to the Public Health Branch.

There are a total of 60,614 positive cases in California and 2,504 fatalities as of Wednesday, according to the California Department of Public Health.