« Despite Gains in the County, City Bed Tax Was Flat During First Half of FY 2019-20 Compared to Previous Fiscal Year 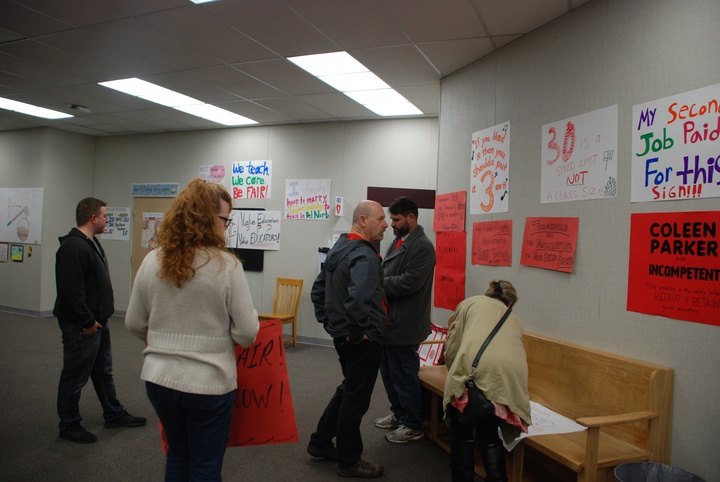 Bargaining teams for Del Norte Unified School District and the Del Norte Teachers Association continue to butt heads over salaries and benefits, though negotiations have passed the one-year mark.

The district has yet to provide a counter offer, DNUSD Human Resources Director Coleen Parker told the Wild Rivers Outpost on Monday.

DNTA lead negotiator Paige Thompson said the union presented its latest proposal to the district — its eighth since 2019-2020 was first up for negotiation on Feb. 28 — last week. Since DNTA and DNUSD are beginning to negotiate the entire three-year contract for certificated staff, DNTA also had a proposal ready to go for 2020-21.

“The district informed us that they couldn’t legally bargain because the Board still has to approve the sunshine document,” she said Friday. “It’s frustrating to hear because we’ve had these dates scheduled for a couple weeks.”

The district’s 2020-21 school year sunshine document is on the agenda for the Board of Trustees’ meeting Thursday.

The sticking point, according to both Parker and DNTA President Marshall Jones, has to do with how long the proposed changes would be in effect.

“We do not want to enter into a multi-year deal,” Jones told the Outpost on Thursday. “With the uncertainty of insurance skyrocketing, we want to keep it year to year until we have an idea of where it’s going to lead our people.”

DNUSD is arguing for a 2-year deal, Parker said.

“The concern is healthcare benefits and not knowing what they’re going to be,” she told the Outpost. “We’re all concerned about that.”

DNTA members are dissatisfied with their insurance because North Coast Schools’ Redwood Plan, their “Cadillac” plan, is expensive and underperforming for the cost, Parker said.

“What they’re charging isn’t covering the cost of the plan based on the usage from people using it,” Parker said, adding that the district will put together a committee of union members for both certificated and classified staff along with DNUSD representatives to look at health benefits.

“We’re going to have to do something as a whole consortium or we will have to pull out on our own and that can happen next December,” she said.

According to Jones, DNTA reached out to CVT to receive a quote and it’s “no better than where we’re at.” However, though changing to CVT won’t save teachers money initially, Jones said it has a larger pool of members, which could decrease their costs overall.
DNTA has also reached out to SISC — Self-Insured Schools of California — which is the healthcare provider for Eureka City Schools, Jones said.

“There are 80 different plans the district could choose from,” he said.

According to Thompson, however, a Tuesday meeting between her team and DNUSD negotiators has been cancelled. DNTA negotiators pointed out that there’s no point meeting if the district isn’t going to provide a counter offer, Thompson said.

“We believe we can roll last year’s negotiations into next year’s and it’ll just be retroactive,” she told the Outpost. “But to keep our paperwork straight, DNTA has decided that for as long as we possibly can to keep giving them ’19-20 proposals and then having separate ’20-21 proposals because we’re starting at the beginning of the contract for ’20-21. The whole thing is open.”