Though It's Not In Del Norte County Yet, COVID-19 Concerns Reach Board of Supervisors » 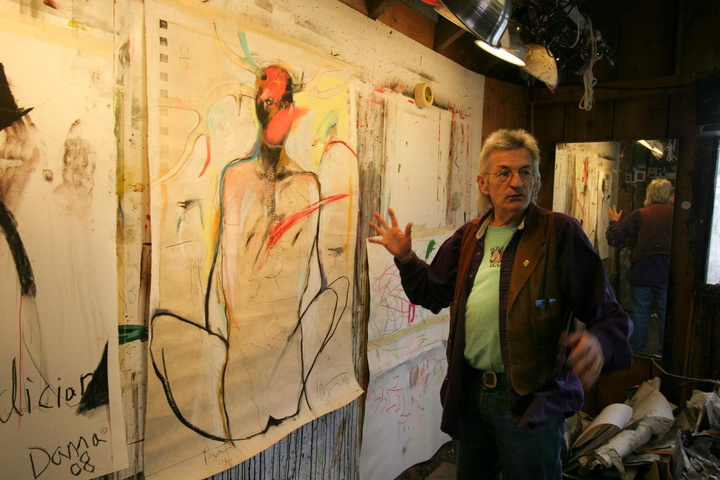 Artist Rick Bartow, a Vietnam veteran and descendant of the Mad River Band of the Wiyot Tribe, will be the focal point of a theatrical collaboration between the tribe and Dell'Arte International. Photo Courtesy of Dell'Arte

Dell'Arte International is partnering with the Wiyot Tribe and has issued a casting call for "Things You Know But Cannot Explain."

From a Dell'Arte press release:

BLUE LAKE, CA – This is a casting call for “Things You Know But Cannot Explain,” a theatrical collaboration of Dell’Arte International and the Wiyot Tribe at Table Bluff.

Native American actors interested in being part of this production are invited to contact Associate Artistic Director Zuzka Sabata at zuzka@dellarte.com by March 20th, 2020. We are seeking to fill the lead role of Rick Bartow: 30s-50s, male. We are also seeking to fill puppeteer/ensemble roles. For more information about the project go to www.thebartowproject.com

The collaboratively written performance will be based on the life and art of nationally recognized contemporary artist Rick Bartow (1946-2016),a painter, sculptor, musician, Vietnam veteran and descendant of the Mad River Band of the Wiyot Tribe.

Mr. Bartow’s life played out in many diverse communities. He lived his whole life in Newport, Ore., where he played music in local clubs and bars; he travelled the world exhibiting his art and developed deep friendships with other indigenous artists, both at home and abroad; he re-connected to his Wiyot roots late in life.

Not a straight biography, rather this play intends to be a portrait of a man who “went forward to go back,” as Wiyot Tribal Elder Cheryl Seidner describes his lifelong journey to find his people, told through the stories of his family, friends, and fellow artists, as well as the images and characters in his art.

"When we saw him dancing at the World Renewal Ceremony in 2014, he had a glow about him and it was good,” Seidner says. “To have him be with the young men and to be a part of that...I'm glad he found his way home."

Mr.Bartow's works have been displayed at the Smithsonian, the White House, and corporate offices and local museums. His 2015 monograph, “Rick Bartow: Things You Know But Cannot Explain” was published to coincide with a retrospective exhibit at the Schnitzer Museum of Art at the University of Oregon, which traveled nationally.

Wiyot Tribal Chair Ted Hernandez became close to Mr. Bartow when he reconnected with the Tribe late in life, saying he found meaning and a sense of place at the Wiyot Reservation in Table Bluff. Tribal Administrator Michelle Vassel characterized Mr. Bartow’s journey — “He got lost — like a lot of Wiyot people —and then he came home when he found us.” Mr. Bartow’s son, Booker Bartow, has stated that it would be an honor to have a theatrical performance created about his father and his father’s work.

This collaboration marks the fourth year of an extraordinary partnership between the Wiyot Tribe and Dell’Arte International, located in Blue Lake along the Mad River, on unceded Wiyot ancestral land. Through the cultural generosity of the Tribe, Dell'Arte now has signage in the Wiyot language located around its historic Odd-Fellows Hall in Blue Lake, and has partnered with the Tribe's afterschool program, Tsek Houdaqh, to create two shadow plays with tribal youth based on traditional stories and incorporating cultural knowledge and Wiyot language learning.

The shared goal of this multi-year partnership has been to bring a more visible cultural tribal presence to Wiyot ancestral territory around the Mad River and highlight Wiyot culture in general. With this new project, Dell’Arte and the Wiyot Tribe hope to bring additional awareness of Wiyot heritage — contemporary and traditional — to all communities in the Humboldt Bay Area.

The Mad River Festival is Dell’Arte International’s annual summer celebration, with five weeks of performance, music and pageantry “from around the world and down the block” in sunny Blue Lake, Calif. This year we celebrate 30 consecutive years of theatre, cabaret, dance, mashups, and description-defying experiments.