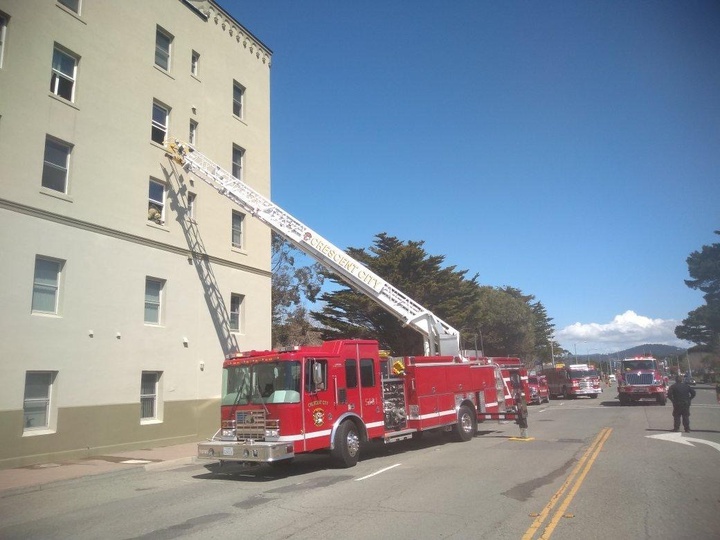 On Thursday, March 26th at 12:47 PM a fire broke out in a fourth-floor apartment at the Surf Apartments located at 108 H Street, Crescent City. Originally dispatched as a fire alarm sounding at the location, the response was quickly upgraded to a structure fire when dispatch advised there was smoke in an apartment on the fourth floor, and occupants were beginning to evacuate. On fire department arrival light smoke was seen coming from an apartment on the Front Street side of the building and the fire alarm system was sounding. There were some occupants already on the street in front of the building.

Crews entered the building for fire attack and search and encountered a number of residents in the hallways and still inside their rooms. The ladder truck was positioned with the ladder to the fire apartment. The fire attack crew found the apartment full of smoke, but the fire had been extinguished by one sprinkler head that activated in the bedroom where the fire had burned a laundry basket of clothing and began to burn the mattress next to it. Search efforts continued as additional occupants were removed or sheltered in place on lower floors away from the fire location. The sprinkler system was shut down, smoke was removed from the building, and crews worked to protect property from water damage. The building electrical was also shutoff. Unfortunately, 12 occupants were displaced by the fire and subsequent water damage to apartments next to and below the fire apartment.

Del Norte County Office of Emergency Services assisted with Red Cross to temporarily house the 12 displaced occupants. Property management on scene was coordinating with an electrician to restore power to the undamaged apartments. Cleaning resources were also being brought in for water removal.