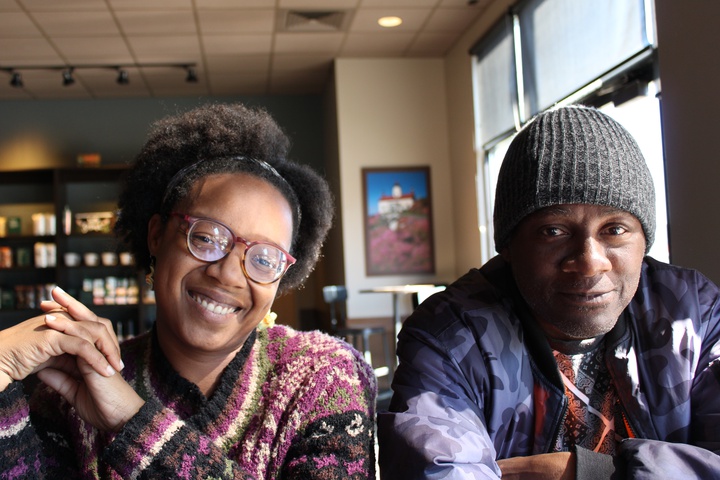 Many people say they want to make a difference, Louis Johnson’s daughter, Erika, actually did.

Erika organized backpack giveaways, Easter egg hunts, summer pool parties and Christmas celebrations. She gave away school supplies, shoes, coats and jackets. If she didn’t have something a family needed, she’d connect them with someone who did.

One Last Stop was a family endeavor, said Kristen Wilson, Johnson’s colleague, who met hi through his daughter’s organization. That endeavor came to a halt on Aug. 13, 2018.

“They were going to see Louis in Las Vegas for a family vacation,” Wilson said. “There was a two-car accident and all eight people involved in the accident were killed. Seven of them were Louis’s family.”

Johnson disembarked from an Alaska Airlines plane at McCarran International Airport to find that his daughter, son, wife, stepdaughter and three grandchildren were dead.

“That day I died,” he said. “But if it wasn’t for the support group they had at McCarran airport in Las Vegas and if it wasn’t for Alaska Airlines, I would never have made it out of the airport.”

Johnson reconnected with Wilson when he returned to Tacoma. Wilson said Johnson wanted to keep One Last Stop going, and since there was “no way I could say no,” she said, Seven Angels Last Stop Services was born.

After traveling through nine states and 23 different counties, giving out bottles of water and “ponchos as presents” to those in need, Wilson and Johnson arrived in Crescent City the day before Christmas Eve last year.

Though their goal was to get to Los Angeles, they stayed in Crescent City, found work — Wilson is at Tsunami Lanes and Johnson works as a handyman — and want to start a transitional housing program locally. They introduced themselves and their organization to the Crescent City Council earlier this month and spearheaded a beach cleanup on Saturday.

At a public hearing on March 2, Wilson and Johnson told the Crescent City Council of their organization’s pilot project to acquire trailers, refurbish them and offer them to those transitioning from homelessness to permanent shelter.

They requested about $70,000 in Community Development Block Grant dollars, which would purchase and refurbish five trailers. Each would serve about four families throughout the year, Wilson told the Council. Seven Angels would expand the program after the first year if it’s successful, she said.

“The potential clients would come from places as in the veterans, (Our) Daily Bread, people who are in other programs who are looking for something to transition from being homeless,” Wilson told the City Council.

However, later that week, Crescent City Finance Director Linda Leaver told the Council that she, Wilson and Johnson agreed that they weren’t ready to submit a CDBG application by the April 15 deadline for the 2019-2020 grant.

Leaver said Seven Angels’ transitional housing program is a good candidate for future CDBG dollars. City staff pointed them to potential funding opportunities with the NorCal Continuum of Care, which manages U.S. Department of Housing and Urban Development for homelessness programs in Del Norte and other Northern California counties. Staff also directed Seven Angels to the No Place Like Home working group and the Crescent City Housing Authority.

Johnson said he and Wilson have already received support from Jerry Johnson, of the local Veteran of Foreign Wars chapter, who urged them to stay in Del Norte County. Local businesses, including Sutton Enterprises and Walmart, helped sponsor Seven Angels beach cleanup.

“We don’t want to step on toes,” Johnson said. “We want to do what somebody else is not doing.”

Over the next six months, Johnson and Wilson will continue to introduce themselves to the community. This includes hosting local events and connecting with businesses. One thing Seven Angels could use is a grant writer, Johnson said. Case managers and people who could refurbish and maintain the trailers they plan to use for their program are also needed, he said.

Getting everything needed for a transitional housing program may seem like a tall order for two people who just settled in Crescent City. But Wilson and Johnson say they can make it work.

“I know tomorrow’s not promised,” he said. “You got to do things to the best of your ability today.”