'I Am A Cycle-Breaker': Yurok Tribal Men, Women, Staff Call For Ousting of Javier Kinney 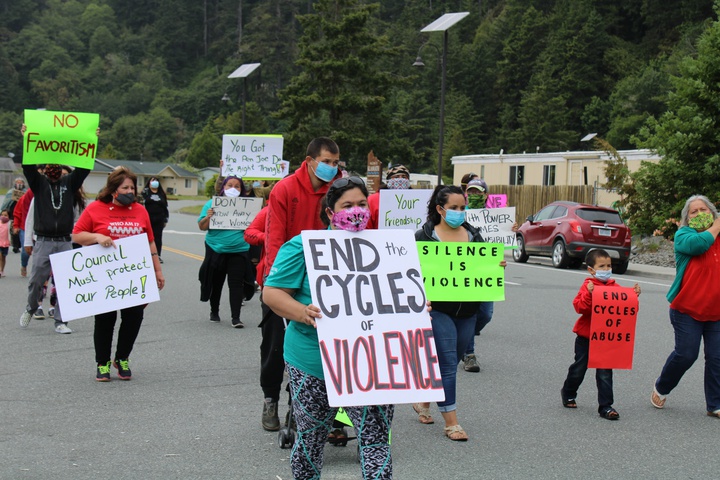 Ruthie Maloney echoed one of the signs her fellow protesters carried down U.S. 101 from Requa to Yurok Tribal Headquarters — “He shouted at me until I cried.”

Standing before a crowd of native and non-native men and women, Maloney, the tribe's former assistant director of self-governance, joined others in condemning Tribal Chairman Joseph L. James for his role in re-hiring Javier Kinney five months after his resignation as the tribe’s executive director.

Kinney, who resigned in November following allegations of sexual harassment and intimidation by a former employee, returned to work for the tribe last month as its forest carbon projects manager. An investigation by the Lost Coast Outpost also determined that Kinney's wife accused him of physical, verbal and emotional abuse.

On Friday, Maloney told her friends, neighbors, relatives and colleagues that she knows what it’s like to work with Kinney. She said she thought she was alone in being mistreated, but found respite when she transferred to the tribe’s legal department.

“He shouted at me until I cried,” Maloney said. “Do I look like somebody who cries, people? No, I am not. How many times did he have me in tears? I can’t even tell you.”

Maloney, her sister Krissy Peters, Elizabeth Azzuz, Donald Moore and other Yurok men and women spoke at the conclusion of a “Call to End the Cycles of Abuse” protest march that began with a 5 a.m. journey from Weitchpec to Sregon on Friday.

From Sregon, the protesters took a jet boat to Requa, alighted at the boat ramp there, made their way to the Jet Boat Tours parking lot and marched the rest of the way to the Yurok Tribal Offices in Klamath. 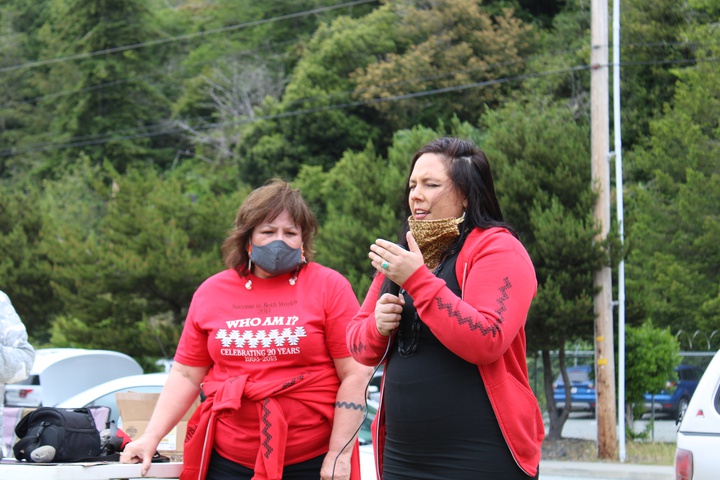 Ashley Bowers sings a song to open a rally in front of the Yurok Tribal Offices during a protest against abuse in the workplace Friday. Photo: Jessica Cejnar

During the rally, Laura Woods, speaking on behalf of Councilwoman Sherri Provolt, said the Orick district representative will call for the ouster of Kinney at a Council meeting Thursday.

According to Woods, the action item the Tribal Council will consider also stipulates that Kinney seek treatment and counseling should he ever want to reapply to work for the tribe so he doesn’t abuse anymore. She urged tribal members to contact their representative.

“You tell them you know what this action item says, you’re in agreement with it and why, and let’s watch how they vote,” Woods said. “With a majority vote this coming Thursday on this action item, we could have some resolution, some relief, at least get the offender out of employment with the tribe and, hopefully, into some type of counseling and help for his problem.”

In addition to calling for Kinney to be terminated, former Tribal Chair Susan Masten, who helped organize the protest march, presented demonstrators with a petition to sign. She also urged elders to sign a special letter to tribal leaders, asking if anyone present had a hand in crafting the Yurok Tribe’s Constitution.

According to Masten, the Yurok Tribe’s Constitution stipulates that everything tribal government does should adhere to the tribe’s cultural values. Anyone acting outside of those values are acting outside the scope of their authority and if legal action were taken against them, a tribal attorney couldn’t represent them, Masten said.

According to Masten, in rehiring Kinney, James has acted in opposition to policy and has bullied his staff.

“He’s not only violating the laws and policy of the tribe, which (he) took an oath of office to uphold, he’s also placing our tribal members and other staff members at risk in asking them to do something that is against the policies that they are supposed to uphold in their day-to-day work,” Masten said.

An example Masten gave concerns Councilmember Lori Hodge. According to Masten, the Constitution states that a new Council member be installed at the meeting following their election. However, Masten said, this didn’t happen.

“I went in to say it was an illegal meeting and the Constitution states they must install the elected person at the next meeting,” Masten told protesters. “And I said did you ask an attorney? And he told me no, that he decided because she wasn’t certified, they could hold a meeting. It’s an example of how he arbitrarily deciding we don’t have to follow policy or law or the Constitution if we’re the chair because so many people elected us so we have the power to move forward on anything we want.”

The elders' letter and the petition calls on tribal leaders to institute mandatory harassment and anti-bullying training for the Tribal Chairman, Council and staff; to conduct an independent investigation of the tribe’s human resources policies; and to hold an executive session for employees to voice their concerns about any abuse in the workplace. 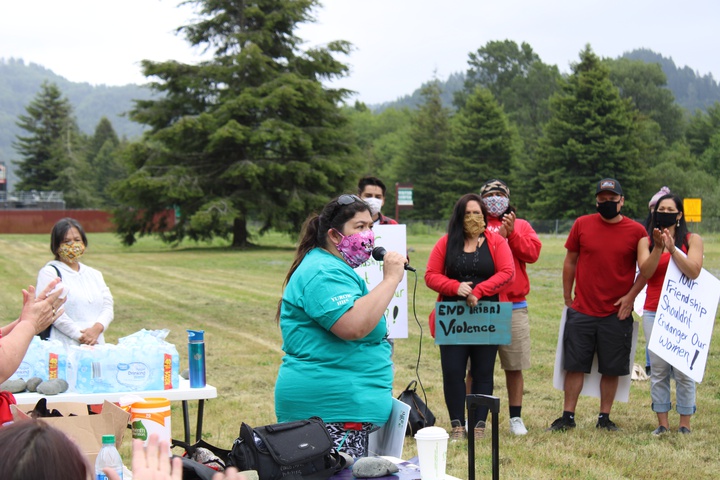 Krissy Peters speaks out against abuse and violence against women at a rally in Klamath on Friday. Photo: Jessica Cejnar

The letter and petition also calls for Kinney’s immediate removal and states that the signatories stand in solidarity with Annelia Hillman, who has been fasting in prayer since May 22 in protest over Kinney’s rehiring.

Many protesters honored Hillman for her protest, wearing green Yurok Health and Human Services Department t-shirts with the words “Healing Through the Generations” emblazoned on front. Azzuz, who made early morning trek from Weitchpec to Sregon, called Hillman the most amazing woman she knows.

“My older brother said to me two days ago, ‘why are you letting that young woman pack the whole tribe on her back?’” Azzuz said.

Azzuz, who is a member of the Cultural Fire Management Council, said she was molested as a young woman, which destroyed her ability to dance because she was felt ashamed. She said she doesn’t want anyone to be ashamed of who they are.

North District Councilman Edward Aubrey, who attended with his Requa counterpart Ryan Ray, also spoke against domestic violence and generational trauma. He said it wasn’t until he was in his 30s when he began to understand what historical and ancestral trauma was.

Aubrey said his mother's ex-husband, after his father died, used to beat her and molested his sister. “This is what I grew up with,” he said.

“It’s time to break the cycle of violence,” Aubrey said. “I don’t want my child, my nephews, my nieces to be raised like that. We need to change.”

According to Aubrey, the Council will address many of the demands made in the elder letter and petition next week.

“I heard you years ago,” Peters told Maloney. “It was at the front desk when I was working on the second floor. I heard your cries and I’m here today for you.”

Peters, who said she was raised with trauma, physically, mentally and sexually abused, grew up in the foster care system in Klamath Falls, Oregon, where she received a new family that showed her strength, courage and love.

It’s these qualities, Peters said, that she’s teaching her children.